“They Bled Blue: Fernandomania, Strike-Season Mayhem, and the Weirdest Championship Baseball Had Ever Seen: The 1981 Los Angeles Dodgers”

The publishing info: Houghton Mifflin Harcourt, $26, 360 pages, due to come out June 4

From Chapter 1, page 1:
“Tommy Lasorda was always a shill. Long before he became a fount of managerial enthusiasm and brand fealty, he was a shill. … The guy loved his team and wasn’t shy about letting the world know it.”

This simple observation is better explained and put into context in the preceding pages. But could this opening salvo be a deal-breaker if a reader particularly protective of  Dodgers’ lore decides this is taking a poke at a sacred cow?
Listen, plenty have opined as much about the Dodgers’ Hall of Fame manager, and this might manage to unite anti-Lasorda sentiment from the jump.
It’s worth asking: Are we getting our chains yanked by someone who just couldn’t resist the opportunity?
Turnbow’s unimpeachable track record with previous baseball-related works go back to the 2017 “Dynastic, Bombastic, Fantastic: Reggie, Rollie, Catfish, and Charlie Finley’s Swingin’ A’s,” and a 2010 favorite “The Baseball Codes: Beanballs, Sign Stealing, and Bench-Clearing Brawls: The Unwritten Rules of America’s Pastime.” There’s also the 2013 audio book, “Baseball Forever!: 50 Years of Classic Radio Play-by-Play Highlights from the Miley Collection.”
But we had ourselves a laugh when we came across the fact Turnbow, in an act of transparency, actually called himself out growing up in the Bay Area as a Giants fan in the 1980s. In both an author’s Q&A that came with our review copy, and in acknowledgements, he clearly points out that rooting against the Dodgers back as a fan was a territorial right. Completely understandable. 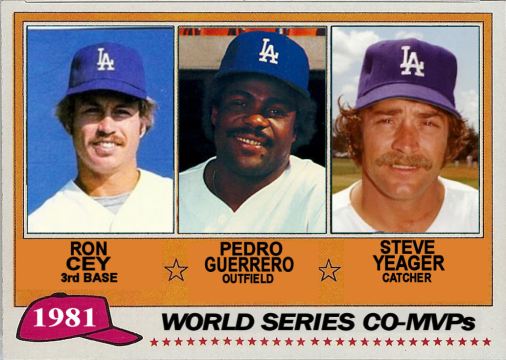 “It might not benefit my credibility as the author of this book to admit that I am a lifelong Giants partisan, but it’s true,” he writes. He adds that he once got a Steve Garvey signed poster when he was 11 or 12, but couldn’t bare to put it on his wall because “it was just too Dodgery.”
Yet, for someone who also admits as a teen he “proudly wore a T-shirt reading ‘Duck the Fodgers’,” Turnbow may be just the right person to come at this. Learn from your enemies how they succeeded … then quietly point out how the Giants won three World Series titles in a five-year span during this decade, while the Dodgers last two championships came from a decade when Teddy Ruxpin was a really big deal.
Still, this got to be a little touchy subject when the author’s point-of-reference was called into question — something we could have overlooked if it wasn’t admitted in the first place:

So the @latimes mentioned #TheyBledBlue in their roundup of baseball books. That's good. The writer, @tomhoffarth, suggests that I'm biased because I'm a Giants fan. That's hacky. https://t.co/aIzPj2hp8X

Or, because good stories are worth telling. The first thing you learn upon entering a press box is that fandom is put aside for whatever duration you're there. Much as I'd love it, it'd be kind of limiting to only write books about the Giants.

Turnbow continues:
“As a journalist, I entered this project looking to build appreciation for the team in ways I might have been able to as a kid. I quickly discovered I already knew everything that mattered. The Dodgers were proficient in ways I could only have dreamed about for the Giants, with a long-term manager who cared deeply about his players. They boasted a roster full of men who, while not necessarily the best players on the planet, wanted to win more than anything else … which is probably why they did. … There’s a lot to admire.”

So it turns out, there’s plenty of plenty of praise for Lasorda’s oversized contribution to the way a bastardized 1981 season turned out.
Without his psychological skills – his real “shill” – this thing probably doesn’t happen after the Dodgers manage to have the most wins in the National League when a work stoppage happened, slogged through the second half, stole the NLCS title in Montreal and then poetically won the franchise first championship since the 1960s by thumping the rival Yankees.

Personal add here: As a journalism major at USC during a quasi sophomore/junior year, October of 1981 came at a time when skipping required Spanish classes started to add up. I was prepared to watch the Dodgers-Yankees World Series Game 6 on the Wednesday night of Oct. 28, but there was a mandatory class test. Tony Slaton, the towering USC offensive lineman who would go onto play for the Rams, seemed like the acting class bouncer at the door that night. Heading out in a sprint to try to get to a TV set after the test ended, I didn’t get far when I heard cheering erupt from nearby dorm rooms. Dang …

That 1981 Dodger team was one that began with Don Sutton leaving after 15 seasons — happily, it seemed, via free agency to rival Houston — and Lasorda took it personally. It also included a spring training where, because of Reggie Smith’s injuries, Al Campanis was trying to make a deal for Fred Lynn and Bill Buckner before settling on Ken Landreaux from Minnesota. There was also the huge business decision of the team deciding to eat Don Stanhouse’s extra large contract — more than $1 million to tell him to go away — and keep a young reliever named Dave Stewart on the roster. 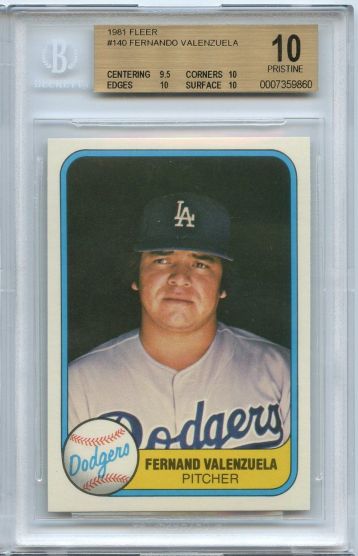 In between, there was Fernando Valenzuela, where a book could and should be done just on what he accomplished that season. Great thing of note: Fleer was the only baseball card company to include him in its set that year. But it misspelled his name.

By the end, it was also a strange lesson taught about business and loyalty. An All-Star roster of Garvey, Lopes, Russell and Cey, Dusty Baker, Reggie Smith and Steve Yeager was about to be summarily dismantled. Young players like Steve Sax, Mike Scioscia, Fernando Valenzuela and Steve Howe were becoming the faces of this ’80s bunch. Why?
Here are some answers, as Turnbow does significant work digging through the memories with fresh interviews importantly with Garvey, Cey, Rick Monday and Jerry Reuss, along with Baker, Sax, Scioscia, Ken Landreaux, Dave Stewart, Jay Johnson, Derrell Thomas, Burt Hooten and the inimitable Dave Goltz. There’s also insight from Mike Brito (in how he landed Valenzuela) and Jaime Jarrin.
Notably missing: Lasorda, Valenzuela, Pedro Guerrero and perhaps even Scully and team owner Peter O’Malley. But again, enough has been written on them all to provide plenty of foundation — particularly on how Lasorda manipulated things from the start, in spring training, when he group his starting players together as much as possible and then made the reserves feels special with his “Lasorda University” pretense that they were starters in training.
“Lasorda was the biggest bullshitter in the world,” Brito confirms. “Even if you were a bad player, he told you that you were a good player and don’t let anyone tell you different. He got into your brain. That’s what made him special — he knew how to get the best out of his guys.”

Another personal aside: I did a few extensive interviews with Lasorda during my writing career. Each time, I re-introduced myself, and even thought we shared the same first name, it still bothered him he couldn’t remember me enough to call me by name. He also said I was “a helluva writer” a few times. Which now makes me suspect that he was just a shill ….

Also knowing that the beat writers of the team often held secrets they had no where else to deposit, there’s a revisit with Chris Mortensen, the current NFL insider for ESPN who covered the Dodgers for the Daily Breeze of Torrance at the time, where I also worked. Turnbow enlists the opinions of writers Lyle Spencer, Peter Schmuck and Mark Heisler, who saw the day-to-day activity and could bring better perspective of a time that made followers of the team wonder if that whole split-season charade was worth coming back to watch games again if one didn’t have a rooting interest.
Adding some research already done by Jeff Katz from his 2015 book “Split Season: Fernandomania, the Bronx Zoo, and the Strike that Saved Baseball.,”  Turnbow ultimately turns the spotlight on what matters by telling the story as well as using copious footnotes at the bottom of pages, because the sidebars and ancillary things that didn’t fit into the structure of the normal storytelling still were worth getting out there for those who enjoy even more rich texture and nuggets of information.
He states early that the “catch with this team” is that these ’81 Dodgers “were presented opportunity after opportunity, throughout the season and into the playoffs and managed to grab on to startling few of them — right up until the players looked around and realized that last-chance options are options nonetheless, and could be used to great effect.”
A perfect summary to the wart of an imperfect 1981 mess of a season for the game, the team and the city that endured it.

A World Series trophy hoist worthy of any in the collection of Dodgers’ literary history. Of all the new baseball books released this spring/summer, this one would carry the most local interest. It not only doesn’t disappoint, it enhances any memories we still have of something all those decades ago — and just how silly that split season was for everyone (particularly the Cincinnati Reds). 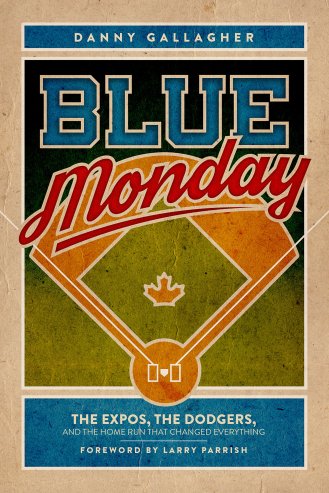 The book: “Blue Monday: The Expos, the Dodgers, and the Home Run That Changed Everything”
The author: Danny Gallagher
The publishing info: Dundurn Press, $23.99, 264 pages, released in November, 2018
The links: At the publisher’s website, at Amazon.com
The review in 90 feet or less: The independent Toronto-based publisher gets an Expos-centric look on one of the darkest days in Canada’s MLB history.
Gallagher examines old narratives about what is still called “Blue Monday” in the Great White North, talking to key players involved in that NLCS that just added to the messiness and made Monday a playoff hero for his Game 5 homer off Steve Rogers in the decisive Game 5. There are plenty of awkward syntax and tangled prose, and a lot more written about the Expos side of all this. Given it’s a fan’s perspective, it’s to be expected. It could have used a good editing process to make it more enjoyable.

Other Dodgers new-ish related books to look out for