“108 Stitches: Loose Threads, Ripping Yarns, and the Darndest Characters from My Time in the Game”

The links: At the publisher’s website, at Amazon.com, at BarnesAndNoble.com (with signed copies available), at Powells.com

Ron Darling can usually get away with saying the darnedest things,  and make it stick.
But then there are some who don’t find it so darling.
Like Lenny Dykstra, accused of shouting racists taunts in the 1986 World Series.
Today, that led to a lawsuit filed. Because Dykstra’s character has been so pristine of late.

Or those who don’t think the drinking problems of former broadcaster Bob Murphy need to be repeated. Others find their way into Darling’s radar — including former minor-league teammate Billy Beane — with remembrances of how they may have deceived some women during their “playing” days.

During the Mets’ home opener last Thursday, Darling issued a statement saying he stands by all the stories in this book. Why shouldn’t he?
One of our favorite media-types to interview, and just hold a baseball discussion with, has extended his personal library. 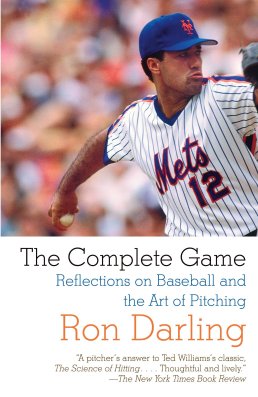 First was the deep-thinking/fun-reading books such as “The Complete Game” in 2009 followed by “Game 7, 1986: Failure and Triumph in the Biggest Game of My Life” in 2016.
He’s also recounted to us on several occasions how Game 7 of the 1988 NLCS continues to be one of his greatest nightmares – losing to Orel Hershiser in the contest that continued to allow the Dodgers’ team of oddballs somehow go to, and win, what still is their last World Series title.

“It was my total and utter disaster,” Darling recalled to us on its 20th anniversary. “You think that all athletes want to do is recount great moments in their careers, and the older we are the better we were. I’m haunted by that seventh game to this day. It’s like a golfer who just had to hit a three-foot putt to make it to the U.S Open. Every pitcher wants to pitch in the seventh game of a series. But since I’m a guy who has spent much more of my life thinking about my struggles and failures than any great moments, this one won’t go away.”
Dang….

With “Stitches,” the Hawaiian-born and Connecticut-raised Yalie takes more time to reflect on how the game has connections, degrees of separation that are more common than you might believe.
One large chunk of the book is his pursuit to look at a list of all the people he has played with, thanks to the help of an Elias Sports Bureau search, and go deep into his mind to see what he remembers about them.
Like, Frank Howard.
The one-time Dodgers giant right fielder ended up as his first manager with the New York Mets in 1983. The 22-year-old Darling, a September call up, recalls Howard, who replaced George Bamberger after a third of the season, as one who “wasn’t particularly keen on baseball’s nuances or subtleties, and I don’t think he gave a shit about developing young talent or getting the most of his veteran players … Frank’s general cluelessness as a manager seemed to run counter to the best interests of the ball club.” He also recalls a Howard profane-laced rant that “in all my time in baseball, then and since, I’ve never heard a grown-ass man in what was ostensibly a leadership position scream with such cartoonish ferocity.”
It’s the stuff right out of a Jim Bouton “Ball Four” sequel.

As is a line from page 97 in a discussion about his naïve nature of steroid use in his time: “There was a phrase you used to hear a lot in the game: ‘The best players are the ones who keep their dicks hard for six months.’ That’s a little crude, I know, but it gets right to the point. The greats of the game are the ones who find a way to play at full strength, full throttle … every single day. That’s what steroids could do for you, I was made to realize once I got to Oakland (and played with Jose Canseco, Mark McGwire and Jason Giambi). I should have realized it straightaway, but I was a little slow to see what was right in front of me. … Instead of FOMO (a fear of missing out), I had FOSMOM (a fear of shaming my old man), but alongside of that, I was so naïve. I stupidly thought that talent would prevail, overtime. … What the hell did I know, right?”
Eventually, between all the stories Darling purges from his memory, bringing back some names from the 1980s and ‘90s that we haven’t thought about for a while, what will resonate more with us are things he admits about how he navigates the microphone when working on the Mets’ TV games or the TBS telecasts, and his views of how today’s game is played versus how he remembers it.
As for the former, he relays on page 115: “When something happens on the field that I’ve never seen before, never even considered, it scares the plain shit out of me in the booth because I’ve got nothing to compare it to, no frame of reference for it. The language of the game doesn’t cover what I’m seeing. And yet at the same time, it’s also exciting as hell because you’re not following a familiar script and you get a chance to improvise … to riff. … (Sometimes) all I can do stand and cheer, cry a couple tears of joy and try not to lose my job by screaming ‘Fuck, yeah!’ into the microphone.”

(There’s also another Bouton-like story about a time when Michael Milken, the convicted junk bond salesman-turned-prostate cancer advocate, came around making his annual Father’s Day pitch for his work. Darling admits he can’t stand the guy, “I hated what he stood for back in the 1980s,” so he would leave the booth when Milken came into to make his pitch. One time, Milken did his public service appeal along with someone who Darling says was “a venerable former manager, one of the great characters of the game,” who we are nearly 100 percent sure is Tommy Lasorda, knowing the two often appeared together. Darling says that this unnamed manager sat in his TV booth chair and left it “soaking wet … he had pissed all over my chair” most likely by accident, but it led to even more craziness).

As for the later: Darling isn’t shaking his fist, but we can see how he aligns very well for what John Smoltz was trying to get across on the Fox World Series broadcasts last fall. Darling talks about a players’ “sense of self importance,” front offices that dictate exaggerated defensive shifts based on analytics that forces pitchers away from their natural strengths, and most of it “leaving me scratching my head in the booth and wondering what the game has become.”
He admits to saying between innings to his broadcast partners that the “powers that be in today’s game were certainly smart, and allowed that their constant maneuvering and manipulating of the usual baseball tactics might often produce the desired outcome, but they were making the game unwatchable.” Darling adds that he’s “afraid” at some point all 30 teams will have the same manager – a young, mid-40s guy with a modest playing career, able to communicate with younger players, a resume in analytics … “and I can even envision a scenario where we’ll see a manager with absolutely no playing experience. … Hey, in this era of driverless cars, Google might even come up with a model for a manger-less team!”
When this happens, remember where you read it first.

An immaculate inning on the mound – every pitch delivered is a strike. If Darling is able to set up and knock out a collection of essays like this every few years, it’ll make any seamhead seem less tightly wound.

3 thoughts on “Day 9 of 30 baseball book reviews for April 2019: Some Darling yarns will have you in stitches”