“Strike Four: The Evolution of Baseball”

The links:
At the publisher’s website, at Amazon.com, at BarnesAndNoble.com, at Powells.com

In Richard Hershberger’s world of 19th Century baseball research as a SABR rattler, rules really do rule.
And here is about as nerdy a pursuit of their origins and forward falling as one could ruefully desire.
You say you want some evolution? It may take a post-Revolutionary War thinking to find the proper context of all this. But historically, this makes a lot of sense. You can’t know where you’re doing with an infield fly rule if you don’t know why it happened in the first place.

Baseball fans, can you explain the infield-fly rule? In the new #SABR Research Journal, Richard Hershberger digs deeper into how this obscure rule came into existence — and it’s not why you may think: https://t.co/mmB2BRrPwS ($) pic.twitter.com/UM1pwcke4m

As we now have a baseball commissioner very concerned about changing/bending/creating rules that pick up the pace of play – not to be confused with shortening the time of game — there are  rules to follow in how to go about changing rules.
It’s important to know and understand how and why a rule came into effect, if it still works, and what could be the desired result if it was to be messed with.

Kind of like adding amendments to the U.S. Constitution, eh? There is that sort of thinking.
For example, what if instead of adding rules that puts a runner on second base if a game goes into extra innings in hopes of deciding an outcome sooner than later, we accept ties – a rule that had been in place for years before night games became more common.
They had no choice in those pre-1930s decades. The game was either resumed the next day, or … hear it out … it was marked down as a draw. 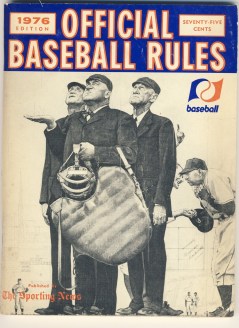 Draw your own conclusions, but sometimes, an evolution of thinking demands an examination of why and how things evolved into what’s considered “that’s just the way we do it now” resolution. Fear shouldn’t strike out when doing some due diligence.
Once the reader gets through the historic breakdown in 33 chapters that covers everything from fair/foul poles, equipment, the size of the batters’ box, a nine-inning structure, and most of the basics, Hershberger has laid the groundwork for the final chapters about the designated hitter, video replay review and “The Future” of what could happen next.
A pitch clock, eh?
As Hershberger notes, there’s been a rule on the books about that since 1901 – Rule 32, Section 2, that says the umpire “shall call a ball on the pitcher each time he delays the game by failing to deliver the ball to the batsman when in position for a longer period of 20 seconds.”
In 2006, the MLB even updated it to go from 20 to 12 seconds “when the bases are unoccupied” (Rule 8, Section 4).
Herschberger is like most citizens of the world who simply point out the laws on the books. Actual enforcement is a whole other set of guidelines that need to be instituted.

Ties go to the writer.

Plus, any time you can get MLB historian John Thorn to chime in on a project, it’s ups the street cred and increase the value. We not only cherish book projects like this, but Thorn’s opinion on them as well. In this case, he concludes:
“It’s now 60 years since Bruce Catton’s observation that the game that was good enough in Anson’s day is good for that of Trout and Betts. Baseball’s rules continue to evolve in the present century, particularly with the advances in digital technology, and the day may not be far off when balls and strikes are called robotically. Speaking for myself, I hope that day does not come.”
Speaking for myself, it best not. But the rules that keep expanding year after year for TV reviews having an effect on decisions makes it a horribly possible outcome as that slope continues to be slippery and slimy.

2 thoughts on “Day 12 of 30 baseball book reviews for April 2019: Pointing fingers at stuff that goes beyond just a rule of thumb”