“Last Seasons in Havana: The Castro Revolution and the End of Professional Baseball in Cuba”

Or, in 90 miles or less, considering the country we can see right off the Florida Keys.
So are we still talking about Yasiel Puig back in town? Wearing red?
Cuba baseball and the MLB seem to come in and out of the news cycles, with politics of course having a role. It’s an important story to stay current on.
But this is an entry, to be perfectly clear, that is meant more as a tribute to Bjarkman, who died last October at 77. In a memorial piece done on him appearing in the Lafayette Journal & Courier called him the Indiana city’s unlikely expert in Cuban baseball, a retired Purdue University linguistics professor who was on another tour of baseball stadiums in Cuba, perhaps his 50th trip over the last two decades, when he collapsed and died at the Havana airport.

Bjarkman’s website shows how he wrote more than 40 books and was keen on Cuban baseball history after he was discouraged about Major League Baseball during the 1994 strike.
“In America everyone fancies himself a baseball expert; perhaps in Cuba too,” John Thorn, official baseball historian for Major League Baseball wrote in 2017, when Bjarkman was given the Henry Chadwick Award, an honor given by the Society for American Baseball Research to top baseball researchers, statisticians and archivists.
“But no American has joined the past, present, and future of each nation’s view of the game as Bjarkman has,” Thorn added.

Bjarkman was big enough to appear on an episode of “No Reservations with Anthony Bourdain” in 2011.
At hearing the news of Bjarkman’s passing, a tribute was staged for him in Cuba and reported on by Universobeisbol.mlbblogs.com.
“The Untold Story: Fidel Castro and Baseball” came out two months after his death.

It’s easy to find glowing reviews of the book, as well as of Bjarkman. Los Angeles Times writer Kevin Baxter wrote that Bjarkman has been the “preeminent English-language interpreter of the magic and mystery of Cuban baseball. Reaching beyond the romance and the rhythms of the island, he has been our guide to the passion, pride, and religious devotion to a different kind of game … In his latest effort, perhaps his most important to date, Bjarkman blends that unique knowledge in an uncompromising work that refutes some of the most durable myths about the Cuban game and its chief benefactor, Fidel Castro.”

This naturally follows Bjarkman’s 2016 “Cuba’s Baseball Defectors: The Inside Story” (which we reviewed here) as well as “A History of Cuban Baseball: 1864-2006” from 2014, updated from 2007.
Bjarkman calls it “an attempt to explain the past half century of Cuba’s remarkable baseball history” and is also “a much-needed correction of articles and chapters I have earlier published in print or online detailing Fidel Castro’s unique relationship with the national sport of his island nation. It is my effort at having the last word while at the same time being fully aware” the last word in a book isn’t always the last word on the subject.
Bjarkman says while he had contact with family member, the fact he never got to meet Fidel Castro “remains my single greatest regret – perhaps the only one – of two decades on the ground in Cuba.” Castro died in November, 2016.
Maybe Bjarkman’s greatest accomplishment: He says he was “the first American allowed to extensively voice personal assessments of the Cuban pastime” on two occasions on Cuban national television, in 2001 and ’03.
“Known for his obsessive micromanaging, Fidel had to be watching,” Bjarkman added.

This “Yanqui” writer who also wrote for the popular website www.BaseballdeCuba.com, was pushed to correct any misunderstandings of Castro’s hold over the game. He states the purpose of this is “a dismantling of popular lengths” that Castro was once a serious pitching prospect, he was solely responsible for shutting down pro baseball after his coup took over in 1959, he didn’t use baseball as a political tool to propagandize his Marxist/socialist/community model, and baseball shouldn’t shield his importance as a Cuban leader and resulting revolution from the American point of voice.
Check all four boxes off.

“This book will of course cause much negative reaction among those who can never accept any positive accounts touching on the homeland they left behind,” Bjarkman adds astutely. “I sympathize with those whose families suffered from the upheaval of the revolution. But I also reject what are oftentimes interruptions couched more in the bitterness of personal history than recent firsthand experience.”

With that, it’s a nice coincidence that “Last Season in Havana: The Castro Revolution and the End of Professional Baseball” also came out this spring.
Brioso, a longtime baseball writer at USA Today who has also worked for the Miami Herald and South Florida Sun-Sentinel, follows up on his very cool 2015 book, “Havana Hardball: Spring Training, Jackie Robinson and the Cuban League” with this examination of the final big year of the Cuban pro game.
Brioso admits to having a family investment in this story based on relatives of his grandfather having arguments about the nation’s politics in the post-revolution period. Brioso also listed four Bjarkman books that he used as references in his bibliography.
The Brioso interview choices to glean remembrances are also more U.S.-centric, including experiences playing in Cuba from Don Zimmer, Monte Irvin, Pedro Ramos and Ralph Avila, and from the wife of former Dodgers manager Jo Lasorda, who says on page 101 about her feelings when the Cuban League suspended play at a time when all commercial businesses closed in Havana amidst rioting: “It was scary because it was so uncertain … We didn’t know what was going to happen. Until all that happened, it was wonderful. It was beautiful. It was like going to Miami or Newport Beach or anything like that. We had a wonderful time until that all happened.”

How they go down in the scorebook

We recall in 2008, author Michael Lewis (five years after “Moneyball”) penned a story for Vanity Fair entitled “Commie Ball: A Journey to the End of a Revolution.” L.A. sports agent Gus Dominguez is the focus of how, before he was jailed, would help players escape to come to the U.S.
Without Puig (or Yasmani Grandal) on the Dodgers’ roster any longer, perhaps the plight of the Cuban defector to the U.S. isn’t so much on the radar any longer. Their stories shouldn’t be put aside. 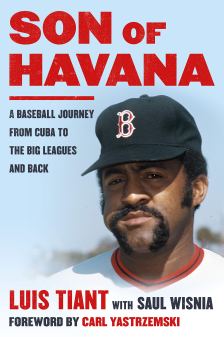 The book: “Son of Havana: A Baseball Journey from Cuba to the Big Leagues and Back”
The author: Luis Tiant with Saul Wisnia
The publishing info: Diversion Books, $25.99, 300 pages, to be released May 14.
In “Son of Havana: A Baseball Journey from Cuba to the Big Leagues and Back,” Tiant recounts his time winning more games than any other Cuban-born pitcher in big-league history from 1964 to ’82, including a stellar season with the Cleveland Indians in 1968 and a World Series appearance with Boston in 1975. He left Cuba in 1962 and returned in 2007, some 46 years after saying goodbye to his parents. The story includes more about how “El Tiante” appealed to two U.S. senators to ask Castro to allow his parents to leave Cuba to see him pitch for the Red Sox in that ’75 Series.
While there is also a 1976, a book by Tiant with Joe Fitzgerald called “El Tiante” came out (Doubleday, 228 pages), this new only remotely parallels a 2009 documentary by director Jonathan Hock also called “The Lost Son of Havana,” where Hock and his crew gets permission to enter Cuba to they can to a U.S.-vs.-Cuba game and bring Tiant back to throw out the first pitch, which probably plays better on film than it does in his book recreation.

2 thoughts on “Day 16 of 30 baseball book reviews for April 2019: Calling on Cuba, Castro and last call for Bjarkman covering the Big Red Machine”