“Ballpark: Baseball in the American City”

The author: Paul Goldberger
The publishing info: Knopf (Doubleday/Penguin Random House), $35, 384 pages, to be released May 14
The links: At the publisher’s website, at Amazon.com, at BarnesAndNoble.com. Also at the author’s website. 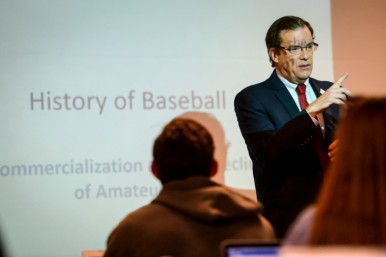 First, in 2016, Dr. Chris Kimball, the president and CEO of Cal Lutheran, invited us to a special history class he carved out to teach that spring semester. “U.S. History Through Baseball” was his passion for a 30-session class. On the day we attended, the lesson plan focused on William Cammeyer, a businessman who, in 1862, bought a six-acre vacant lot in Brooklyn and converted it from an outdoor ice-skating pond into a baseball field called Union Grounds. It was a residue of how business was starting to spring up in that New York borough – the predecessor to Brooklyn’s Ebbets Field, which was the predecessor to the Dodgers moving to L.A. after trying to get a domed stadium approved.

Kimball had an entire class do a term paper about on stadiums –  a way for them to relate to a ballpark from whatever part of the country they grew up and may have been attached, and then do more research more about it. Kimball, a Boston native, had an affinity for Fenway Park but also talked about his interest in reading more about the old Shibe Park in Philadelphia, where an urban historian described how that section of the city grew and then declined around the life of the ballpark.

A year later, we came across a book by Jerald E. Podair called “City of Dreams: Dodger Stadium and the Birth of Modern Los Angeles,” and included it high up in our annual book reviews.

Podair, a professor of history and American studies at Lawrence University in Appleton, Wisc., devoted all sorts of research into declaring: “Dodger Stadium made downtown Los Angeles possible. Downtown Los Angeles in turn made modern Los Angeles possible.” This, after the construction of the L.A. Aqueduct (1913), City Hall (1928), the Coliseum (1923) and Union Station (1939) gave that central core specific definition, Dodger Stadium’s opening on April 10. 1962, with its modernistic form and accessibility, “began the process of change … the gateway that transformed downtown.”

In beginning work on this unique project, Goldberger, a 68-year-old Pulitzer Prize–winning architecture critic from Yale and contributing editor to Vanity Fair, admits he drew much insight from Podair’s book when it came to the part where he would discuss the evolution of Dodger Stadium.

Hang in there, baseball season coming, and in May, terrific new book by Paul Goldberger about bal… https://t.co/HHsP9Sznok via @weebly

In much of his Chapter 6 titled “Leaving The City,” Goldberger gets into how ballparks built or rebuilt in the twentieth century were “dense, lively, curious mixes of the eccentric and the grand. They were disheveled, scrappy and for the most part good natured places, constructed on the premise that there was something valuable in the notion of even so expansive a public space as a baseball park being tightly woven into the urban environment. Baseball parks were a part of the urban fabric because, up until the middle of the twentieth century, everything was part of the urban fabric.”

While Goldberger recounts the motives behind the O’Malleys moving to Los Angeles, buying Wrigley Field in L.A., deciding to use the Coliseum as a home stadium in ’58 while allowing the A.L. expansion Angels to use it as their home field in ’61 as both awaited the construction of Dodger Stadium, we are more enamored with his professional assessments of the Southern California-based landmarks that have undergone several remodels but remain true to their usefulness.

He calls Wrigley Field “a small masterpiece” with its “slender twelve-story office tower as its campanile” and “arguably the most elegant of all minor league ballparks. It gave O’Malley a strong card to play in Los Angeles, even as he was continuing to push every lever he could find back East” to get a replacement built in Brooklyn or nearby to get rid of Ebbets Field. 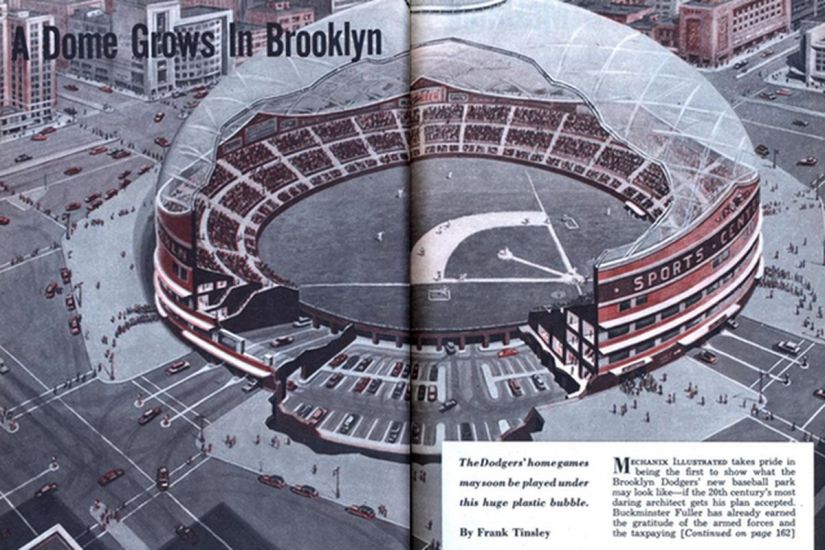 O’Malley’s idea for a dome stadium in Brooklyn, one done by Norman Bel Geddes and another by Buckminster Fuller, designs on pages 160 and 161, had something that “if nothing else, was remarkably prophetic, foreshadowing much of what would happen in the 1960s and ‘70s when baseball would take a long, frustrating detrout into the realm of domed stadiums, vast, enclosed public objects that most fans traveled to in smaller, enclosed private objects on wheels.” As opposed to, say, subways?

With Dodger Stadium designed by Emil Preager, which remains the third-oldest park in the MLB rotation, “a metaphor for the city itself, or at least what the city aspired to, which was both movement and privacy,” in Chavez Ravine with its hillsides and within sight of the downtown L.A. buildings and City Hall. 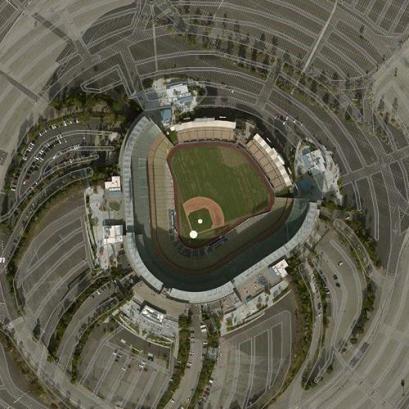 It was “redefining urban form” with freeways leading into it. “O’Malley’s intentions paralleled Disney’s. With Dodger Stadium, O’Malley sought to go beyond the funky baseball parks of old in the same way that Disney’s park went beyond the tawdry amusement parks and carnival midways of old. O’Malley, like Walt Disney, wanted to create a public experience in the city of private experiences, to expand the notion of an attractive public realm in a city notoriously short on public space. … it would not be truly public, and would require tickets at the gate … but (he) was determined to justify what he was charging by making his place as bright and wholesome as possible, and relying heavily on the tools of entertainment.”

He notes that, after the facelift provided to the place by Janet Marie Smith under the McCourt ownership, Dodger Stadium “remains largely an island in the midst of the city’s developing urbanism” with “relative isolation.”

It should come as no surprise, then, when Disney bought the Angels for a time in the 1990s and “upgraded” Angel Stadium, entertainment was at the forefront, but it didn’t translate the same as Dodger Stadium.

Goldberger only spends minimal paragraphs on how Anaheim Stadium transformed into its current being out of farmland not far from Disneyland, during a Chapter 7 mention in his “Era of Concrete Doughnuts” critique. It somewhat shortchanges the park’s existence in what it was and what it has become – in some ways, even more an oasis than Dodger Stadium as far as fan experience, parking accessibility and freeway access.

Also, a "Paul Goldberger baseball architecture book" would probably be my answer if someone asked me to describe my ideal book in 5 words.

Goldenberger, who said the idea for this book came from an assignment he was given at The New Yorker to compare and contrast the new Yankee Stadium and new Citi FIeld in New York as they went up in 2009, says in the acknowledgements that baseball “as an important part of the public realm” is the “true message of this book.

He makes interesting philosophical observations early on that ballparks are “a garden at heart” and the best examples of urban and rural co-existence. They are a “simulacrum of a city.” They are the “Jeffersonian impulse toward open space and the rural expanse, and the Hamiltonian belief in the city and in industrial infrastructure.” A garden won’t exist without the structure around it, and a “stadium without a diamond and the outfield would be a pointless construction.” Or, a place for motocross events and tractor pulls, which now seem to gravitate more to large indoor arenas.

In reading this in the context of Los Angeles, it should be worth noting how the new Banc of California Stadium for the LAFC of the Major Soccer League has created a perfect balance as well of urban and rural. Next to it, the regal Coliseum has the same with as much historical juice as any facility of its kind in America.

It’s the generations of ballparks the Goldberger wants to focus on, like Union Grounds in Brooklyn, that took their shape and form from the city streets and were tied to their unique surroundings shape. The second generation provided more room for car parking during the post World War II boomer era to escape the city. The third generation is returning to downtown, integrating itself with its origins. If there is a fourth generation, it’s the theme park genre that’s now trending.

Watching how Dodger Stadium and Angel Stadium has evolved through these times, it makes far more sense, thanks to Goldberger’s set of intellectual blueprints.

An “exuberant ode to Edens” is how the publishers want to frame this. Nice alteration, but not every ballpark fits inside a city as it should, or is even a garden party. In a rather larger-than-average, beautifully-covered book, Goldberger does a very significant job in explaining all that. To express the wide appeal, we enjoyed some of the back-of-the-book remarks from people like Jerry Seinfeld (“I read this entire book! Baseball inspires a religious devotion for me and its many followers. … (this has) incredible new insights into the cathedrals at which we love to worship it. I am so grateful for it.) and baseball historian John Thorn (“The still evolving story of the park in the city … (is) profoundly about the soul of the game and our imperiled sense of community.”
It reminds us how in 2017 we reviewed “Lost Ballparks” and felt a connection there as well.

Also look out for: “Roadside Baseball” by Chris Epting (Santa Monica Press, 360 pages), the third edition of his book due out June 4. It focuses on more than 500 important baseball events, where they took place and – most important – preserving their place in history as the stadiums and ballparks are often no longer around. Among the new entries by the Huntington Beach-based Epting are the locations of the original Wrigley Field in L.A. built in 1925 and torn down for good in 1969, the field used in the movie “The Sandlot,” and the field in Orange where many believe Babe Ruth hit his longest home run against Walter Johnson more than 100 years ago.

4 thoughts on “Day 21 of 30 baseball book reviews for April 2019: The urban and rural co-existence of ballparks, from the architectural critic view”