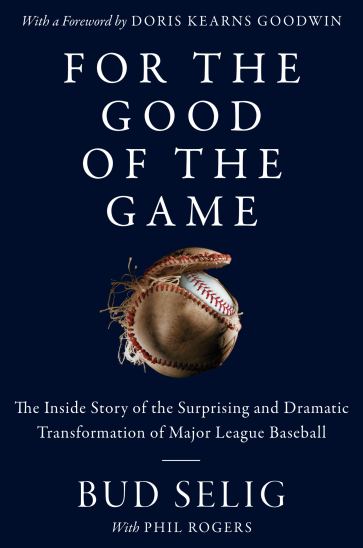 “For the Good of the Game: The Inside story of the Surprising and Dramatic Transformation of Major League Baseball”

The links:
The publishers website, Amazon.com;  at Barnes&Noble.com (with autographed versions available), at Powells.com.

The guy who became the accidental MLB commissioner for 22 years, fumbled his way through the steroid era, had the 1994 World Series canceled on his watch, decided the All Star game winner would determine World Series home field and OK’d the use of replay — all after he strategically moved his own franchise from the American League to National League after snatching it away from Seattle back in 1970 — now has the Hatian-stiched balls to put out a book claiming he deserves some/more recognition for ushering the game into the modern age.
What do ushers get paid now a days? Not the severance package afforded to a retired MLB head man. 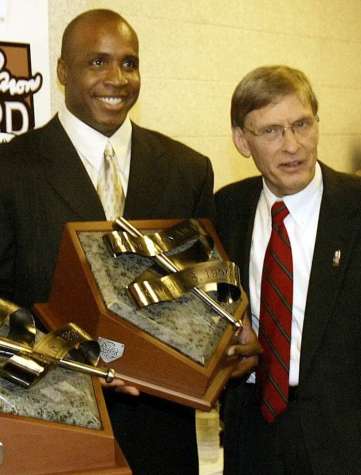 To get things playfully started, Selig opens by admitting to his squeamish nature toward watching Barry Bonds establish a new career home run record on his watch.
“I know some people will forever link me with Barry Bonds. Some will say baseball’s failure to limit the impact of steroids of quicker is my failure. They may even call me the steroid commissioner. That’s okay, I guess. It’s not fair. I don’t like it, but I’ve come to understand it.”
(Now, please read this link).
Instead, he’d rather be remembered — perhaps revered — as getting baseball to have “the toughest steroid policy in sports.”Again, his words.
And on the business end of things:
“I inherited a fucking nightmare, if you’ll pardon both my language and my honesty. But give us some credit. We identified and corrected our problems. … I shutter to think where baseball would be if we hadn’t found a way to work together to make these deals. We literally might have been out of business. I’ll say that.”
So this is where we’re going, eh? Emphasizing the $1.2 billion in revenue in ’92, 13 years of financial growth, attendance records, 20 new ballparks opening and … dropping an F-bomb … Even Mr. Rodgers knows when and where that’s most impactful.
“I know all about change,” Selig adds. “My life has been full of it.”
At one time or another, we have probably echoed the sentiment that Selig was full of it. Now he appears to agree. 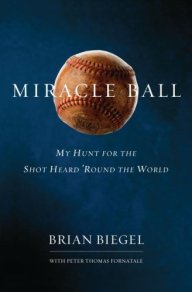 Aside from the window dressing of the Selig cover looking an awful lot like one of our favorite books in recent years —  “Miracle Ball: My Hunt for the Shot Heard ‘Round the World” by Brian Biegel some 10 years ago …
Listen, just months before he died in 1998, then-baseball commissioner Bart Giamatti gave us “A Great and Glorious Game.” (Yes, dealing with the Pete Rose gambling suspension eventually did in his health).
In 2002, there was commissioner Fay Vincent’s “The Last Commissioner: A Baseball Valentine.”
Bowie Kuhn dropped “Hardball: The Education of a Baseball Commissioner” in 1987.
Maybe Allan Huber “Bud” Selig decides he’s time to have the hubris to seek validation. To write his own narrative. To explain his own inexplicable actions.
We didn’t read very far into it. We couldn’t. Someday, later, we may and then update this a bit. Perhaps after he does a few interviews on the TV circuit trying to promote this.
Perhaps he even reveals his personal barber. For the good of all our games. 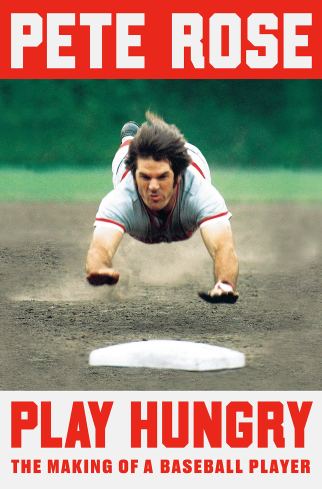 The book: “Play Hungry: The Making of a Baseball Player”
The author: Pete Rose
The publishing info: Penguin Press, $28, 304 pages, to be released June 4
The links: At the publisher’s website, at Amazon.com, at BarnesAndNoble.com, at Powells.com
A quick hit:  Full discloser: Despite many attempts with publishers and other resources, we weren’t able to procure a review copy.
How far into it we would have ventured — like the Selig tome — we’re not sure anyway.
For the good of the game, Selig did deny Rose’s eligibility issue. For the good of Pete Rose, the rules of showing true remose and redemption didn’t fit.
He’s too hungry to change.
By the way, Pete Rose wrote a book. All by himself? No.
Although he fully credits Peter Goldenbock (1985, for “Pete Rose on Hitting: How to Hit Better Than Anybody”) and Roger Kahn (1989, “Pete Rose: My Story”) and Rick Hill (2004, “My Prison Without Bars,” where he finally comes clean about all previous lies), there’s no mention that ghostwriter extraordinaire Steve Kettmann, the former San Francisco Chronicle writer who helped Jose Canseco do his best-seller “Juiced” and gave it credible reporting, did this one with the may who turned 78 just a couple weeks ago.
Is that a crime, too? Not really. But just come clean. We’re guessing the 1971 tale, “The Pete Rose Story: An Autobiography” wasn’t a solo project either. But when you avail yourself to be a truth teller, about your own life, isn’t a lack of transparency a character flaw that will always be a public hurdle?
Still smarting from his permanent baseball ban in August, 1989, Rose likely didn’t write this book with any references to “Hustle: The Myth, Life and Lies of Pete Rose,” by Michael Sokolove in 1989 or “Pete Rose: An American Dilemma” by Kostya Kennedy in 2014. Again, we are just assuming.
Honestly, we have Rose Fatigue in a big way.

Everyone who orders my new book before June 4 will get a sticker signed by me that they can put in their copy, and 10 lucky winners will also get a signed baseball. https://t.co/9i3dSgZIuJ

What hasn’t he said already about himself, how he was raised, what he learned (or didn’t) from his mistakes, and what he wants to do going forward aside from signing autographs in a Las Vegas casino shop?
He wants to make sure we know he’s still around.
Fox Sports gave him a visible platform a couple of years to try to rehab his image on its MLB post-game studio show. He’d show up with a bowtie and a smirk, and try to become baseball’s version of Charley Barkley when he looked more like the Thanksgiving Day-visiting uncle of Pee-wee Herman.
Just before the 2017 postseason, not even Fox could handle the damage control and quietly released him, when Rose caused even more of his own undoing, filing a defamation suit against former MLB lawyer John Dowd and then having some stories about sexual indiscretions from the 1970s come to light.
What gives Rose the literary license to swerve out of his lane again with more of his profound spin? He didn’t get enough TV time with that reality show about splitting his life between Las Vegas autograph signings and his latest wife’s house in Valencia with his step kids?
Rose is empowered by his 24-season playing career, 17 All Star Games and career 79.7 WAR — maybe trying to find a new angle to endear himself with the latest crop of younger voters of the Baseball Hall of Fame who someday may get the chance to give him the thumbs up or down about a plaque among the immortals.
He deserves Cooperstown fame on statistics alone, as the game’s all-time leader in hits, games played, at bats and singles when he finally stopped as a player-manager in 1986 and just went on to manage the end of his baseball life with tout sheets and betting slip-ups.
But as is the case, he also holds the MLB record for making the most outs – 10,328. And for putting himself out there in the media world when no everyone is ready to embrace his thick-headed approach to anything, including baseball.

Rose, so he says this time, has another new message: Play the game the “right way.”
At this point, we’re not even sure what he means by that.
The publishers, because they have to write press releases to sell these kind of things, have framed this as Rose’s “love letter to the game” told with “candor and wry humor.” It’s his “final word on all the glories and controversies in his life – including tales he’s never told before.”
Final word, until he does another one in a few years.
Save it for someone who cares.
No one is hungry for another Pete Rose book. Not even if this is his just dessert.

Pete Rose for the Baseball Hall of Fame https://t.co/n8yHwX9RhF

1 thought on “Day 28 of 30 baseball book reviews for April 2019: For the good of Allan Selig, and Pete Rose’s hunger for attention”