kept seeing the “Why is she wearing makeup?” question this World Cup, so I wrote about the impossible space that female athletes navigate — strong but not too strong, athletic yet feminine, feminine but not so feminine that you might want to wear lipstick https://t.co/g3YfSSUvAP

U.S. soccer fever is preventable, with or without a shot at your doctor’s office. But if you’re going to be full-on exposed to what drama lies ahead, have plenty of chicken soup available.
The Women’s World Cup in France reaches the end of the Round of 16 and then a potential let’s-settle-this-thing-early quarterfinals this week. The U.S. Women’s National Team has put itself into Ugly Americans category in some ways – the overwhelming favorite, and nothing less than a title would be a crash and burn mission.
So next up: Spain, Monday at 9 a.m., FS1. If the U.S. wins, then it meets up with host France in the quarterfinals on Friday (noon, Channel 11).
Afterward, the semifinals (July 2-3) and the final (July 7).
Nancy Armour wrote in USA Today after the U.S.’s 2-0 win over Sweden that “the Americans proved they are the force to be reckoned with over the next three weeks.
“Whatever team has designs on lifting that trophy July 7, it’s going to have to go through the Americans to do it.”
The Americans finished the group stage with the maximum nine points, and set a World Cup record with 18 goals in the group stage. Defensively, the U.S. and Germany are the only teams that have yet to allow a goal.
“I feel like any team that’s going to go on and win is the team that has so many threats and doesn’t rely on one player,” Crystal Dunn said. “People should know we rotate our players. We have a strong 23 and we’re always fresh and ready to go.”
The rest of the Round of 16:
Canada vs. Sweden in Paris, Monday at noon, FS1
Italy vs. China in Montpellier, Tuesday at 9 a.m., FS1
Netherlands vs. Japan in Rennes, Tuesday at noon, FS1
Already advancing to the quarterfinals: France, Germany, Norway and England.
More info: www.fifa.com/womensworldcup

Also:
Closer to home, the CONCACAF Gold Cup tournament has given the U.S. Men’s National Team some promising exposure after wins against Guyana and Trinidad and Tobago by a combined 10-0 count in the first Group D contests. That round ends with a U.S.-Panama matchup on Wednesday (at Kansas City, 6 p.m., FS1).
Then there’s a slot in the quarterfinals on Saturday (either 4 p.m. or 7 p.m. in Houston, FS1) or Sunday (either 2:30 p.m. or 5:30 p.m. in Philadelphia, FS1).
After that:
* Semifinals: July 2-3 in Glendale, Ariz., and Nashville
* Final: July 7 in Chicago
More info: www.goldcup.org

#Dodgers rookie Will Smith celebrates his three-run walk-off home run in the bottom of the ninth inning to sweep the Rockies with three walk-offs at Dodger Stadium pic.twitter.com/D54CIlLaVE

Here's the audio clip of Charley Steiner calling the Dodgers' Will Smith hitting a game-winning HR on Sunday vs. Colorado:https://t.co/bbp7uj0DCv
Here is the Joe Davis call:https://t.co/5XrlSJmFGx pic.twitter.com/YJUIRKWf7p

Coming off an historic weekend sweep of the Rockies at Dodger Stadium, the Dodgers’ upcoming four-day trip to the Mile High Club, with a pitching staff that needs a deep breath, may require that yellow cone fallout out of the sky for an oxygen fix. A couple weeks ago, the Rockies invited the Padres into Coors Field and combined for 92 runs, an MLB four-game series record. Outcomes like 14-13 and 16-12 in extra innings take anyone’s breath away. When they last played in Colorado April 5-6, the Dodgers swept with scores of 10-6, 7-2 and 12-6 – and the last one included Joe Kelly even getting a win in relief. If Cody Bellinger doesn’t collect a dozen hits in this series, off 12 different Rockies’ throwers, something isn’t right.
Also of note: The series opener on Thursday marks the half-way point in the season. For those projecting Bellinger stats, or the Dodgers’ potential win title, just double it after that game.
Meanwhile, in Anaheim, there’s a Yasiel Puig sighting. The Angels reach the season halfway point in the back half of a two-game series with visiting Cincinnati on Wednesday that has an earlier start time – beware of the shadows.
How the week lays out this week for the Dodgers, 54-25, 13 games up in the NL West, and still No. 1 in the ESPN Power Rankings with a six-game win streak, seven of eight and nine of 11:
* At Arizona: Monday (Clayton Kershaw vs. Zack Greinke) at 6:40 p.m.; Tuesday (Ross Stripling vs. Robbie Ray) at 6:40 p.m.; and Wednesday (Tony Gonsolin vs. Taylor Clarke) at 12:40 p.m., all on SportsNet L.A.
* At Colorado: Thursday (Hyun-Jin Ryu vs. Peter Lambert) at 5:40 p.m.; Friday (Kenta Maeda vs. Antonio Senzatela) at 5:40 p.m.; Saturday (Clayton Kershaw vs. Jon Gray) at 5:15 p.m., Channel 11; Sunday (Ross Strripling vs. Chi Chi Gonzalez) at 12:10 p.m. All except Saturday on SNLA.

Mike Trout's career WAR is 69.0. He's tied with Ty Cobb for the most WAR by a player through age-27 https://t.co/c29rEaApbs pic.twitter.com/RROMkLAa1p 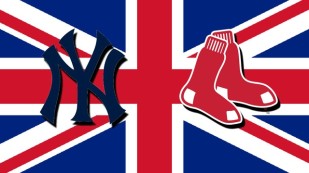 Fox and ESPN break out the Clash’s “London Calling” riffs as the New York Yankees and Boston Red Sox agreed to a two-game series in London Stadium, home base for the 2012 Summer Olympics. One of the Brit media companies called it a “doubleheader” for the games scheduled on Saturday (10:10 a.m., Channel 11) and Sunday (7:10 a.m., ESPN). Bangers and mash optional for the two breakfast club appearances that happen at 6 p.m. local time in a place where the sun won’t set until likely 10 p.m.) At least tune in to see if this turns into an international incident.

The new MLB system for fans picking the All-Star Game starters has devolved into some sort of “primary election” that set the top-three-per-position ballot, and now the final choices happen between Wednesday at 9 a.m. through Thursday at 1 p.m., and the results are announced on ESPN at 4 p.m. in a one-hour show. Is this necessary? It’s happening nevertheless.
More info for those who need to know: www.mlb.com/all-star/ballot

Updated look at attendance in the @WNBA in 2019:

A lot of variance in # of home games for each team (Lynx with 7, Sparks and Mercury only 3 each).

That said, the @minnesotalynx currently have the lowest variance (highest consistency) in their attendance numbers in WNBA history. pic.twitter.com/pZjBkWNtmD

The Sparks’ four-game losing streak comes up against the annual LGBTQ Pride Night when Las Vegas comes into town (Staples Center, Thursday, 7:30 p.m., CBSSN, Spectrum SportsNet) followed by a nice Sunday afternoon contest against Chicago (Staples Center, 2 p.m., Spectrum SportsNet). Candace Parker’s return has still not resulted in a win, as she is a combined 5 for 29 shooting thus far in three games, and 2-for-11 from 3-point range. She still managed 12 points in a loss at Phoenix on Sunday with 11 rebounds and three assists.

It’s the little things that matter. Watch @VandyBoys push in their chairs at the conclusion of their postgame press conference. No detail is too small. @NCAACWS #CWS pic.twitter.com/L9U5sIoVxl

The College World Series in Omaha, Neb., which failed to give No. 1 overall seed UCLA a bye into the final eight, let alone the final two, has to do it on the field this way.
Michigan (49-20), the team that eliminated UCLA at Jackie Robinson Stadium with not much of a whimper in the Super Regionals, comes into the final with a head of steam winning nine of their 10 post-season games, and now come up against second-ranked Vanderbilt (57-11), which has won 12 of its 13 postseason games going to the SEC tournament.
Michigan hasn’t been this deep in the NCAA championship since winning it all in 1962 and 1953. The Big Ten hasn’t had a national championship since 1966.
The best-of-three schedule:
Monday, Tuesday and, if necessary, Wednesday at 4 p.m., ESPN
More info: www.ncaa.com

A Pac-12 student-athlete has taken home the 🏆 the last two years.