“Future Value: The Battle for Baseball’s Soul
and How Teams Will Find the Next Superstar”

The links:
At the publisher’s website
At Amazon.com
At BarnesAndNoble.com
At Powells.com
At Indiebound.org

Look closer at the cover: Unless this is two photos superimposed into one, it’s Clayton Kershaw trying to react to a ball coming back at him, one he just hurled at Mookie Betts.

The future value of that photo could be ironic if the 2020 season, with them as Dodgers teammates, doesn’t happen. It does seem to do well to frame the main title of the book and keep the ball in play.

Talent evaluation in the age of analytics pushes information into all sorts of directions, and can make things even more absurd when you’re trying to create an accurate assessment of an 18-year-old high school kid who may not have even had time to take a drivers’ training class or wash his own laundry. We’ve talked to enough scouts to know how this works, what they believe their strengths are and how much/little they feel their voices heard these days.

The complicated process surrounding the evaluation of talent is full of further analysis, and that’s where this 13-chapter book begins as a collection portal. 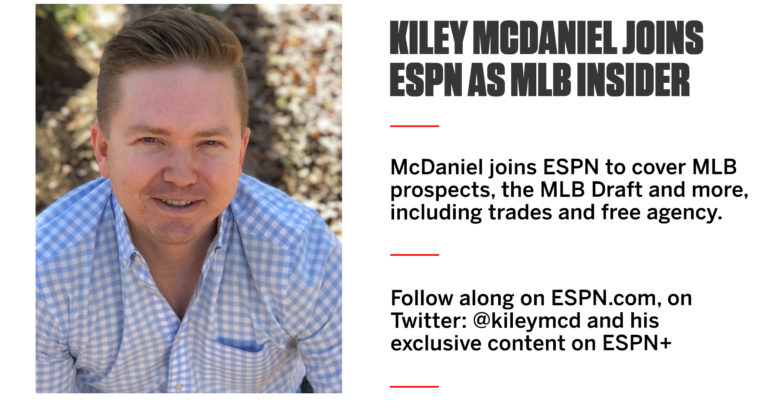 I ranked the 30 farm systems for ESPN+, writing almost 5,000 words noting each team’s effectiveness by department and where they are on the competitive cycle. The accompanying video was also shot in my kitchen, so there’s something for everyone https://t.co/lgub6cBCj7

But then having Keith Law hit leadoff with the forward also certifies this is coming from a “smart” perspective (coming soon: a review of Law’s new book, “The Inside Game,” that launches Tuesday, April 21).

Writes Law: “Eric and Kiley give you the grand tour of scouting without asking you to leave your couch. They’ll walk you through the draft, the most important three days in the entire year for amateur scouting; the Wild West of international free agency (where players can sign at age 16, and often strike verbal deals with teams before they’re teenagers); and professional scouting, where scouts evaluate players already in the minor leagues…. You couldn’t ask for a better pair of tour guides.”

Law, a former Blue Jays front office guy as well, also remarks that the way “the industry perceives and employs scouts has changed dramatically, and I don’t think it has changed for the better.” Fewer actual physical scouts, more R&D people who emphasize different aspects of the game (“launch angle”) and a collision of philosophy that creates what we have today — a sometimes unwatchable version of what we used to enjoy and think along with.

Longenhagen and McDaniel admit in the intro they “don’t think it’s reasonable to expect everyone who picks up this book to have an opinion about our objectivity the way some might from reading our collective work for the last decade … (we might have fans of teams) pissed at us for presenting unflattering facts or opinions” because inherent in baseball “is an awful lot of failure, from all parties involved.”

They are advocates of platooning, defensive shifts (“as long as the pitcher buys in”) and the “concept of asymmetrical risk.” They also pull for “the idea of using a scouting report-informed draft model” that moves players up and down “based on makeup and other intel gathered by the scouts that would give better context to each player’s standing.”

After snaking us around with various concepts and methods about things we probably didn’t know or really weren’t compelled to understanding — like the international signings in early July  known as the “made world” of  “J2 — we can easily be diverted to the end game, where each team is analyzed for how it “goes about their business.”  That starts with a diagram divided horizontally and vertically with four quadrants (is there a name for this?). On the progressive/analytics side, the Dodgers are among the 11 leaders as “model-driven contenders.” The Angels hover below that mid-line, in the quadrant of failure, among the six who are “fine-tuning the formula.” 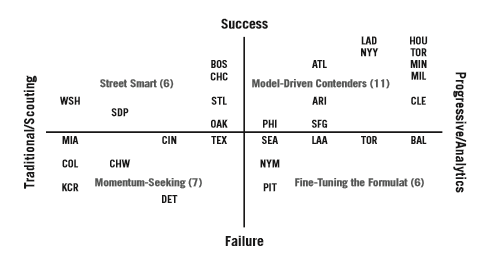 If we go with the theory that the Houston Astros as the most successful of the model-driven contenders based on their recent successes and, as the authors note, “the collateral damage caused by singular focus on innovation without much regard for consequences,” we come to see how others are dealing with various degrees of successes and failures in a game where a 30 percent success rate of a hitter is deemed pretty darn good.

The Dodgers, they have determined, find “value with volatile players” in the draft who slide down the grading scale because of injury concerns or they don’t have a great track record due to “odd, unprecedented reasons … players who are perhaps undervalued for reasons that have nothing to do with talent.” For example, in recent drafts, they would use a second, third, or fourth round pick on players like Mitchell White, Mike Grove, Morgan Cooper (all injured) and  Brandon Lewis (one year of performance, extreme weight loss) after grabbing  Walker Buehler as “a first-round version” of all that weirdness. With a pending Tommy John surgery procedure shortly after his pick.

The Dodgers also seem to be keen on hitters they think they can develop with a swing change. What hovers over their whole development team is a recent Department of Justice ruling about the signing of Cuban players in 2015, before Andrew Friedman was hired as president of baseball opps.

(As an aside, the guys follow up by projecting the Giants, headed by former Dodgers GM Farhan Zaidi, as one thatwill “follow framework similar to LA. Zaidi spent his first year on the job throwing 4A types against the wall to see which of them might stick and become either a trade-able asset or long-term piece.” And San Francisco’s spring training facilities are being renovated “which means they have an opportunity to build structures that optimize the use of technology rather than what most teams have had to do, which is install tech after the fact.” Keep that in the back of your mind.

The Angels, meanwhile, “most have done work on the 40-man fringe, on waivers, trying to make marginal improvements to the big league roster without giving up prospect assets. …  they have also targeted scrapheap minor leaguers, guys who formerly received a big bonus or were real prospects for one reason or another, but fell by the wayside. This hasn’t quite yielded anything yet.”

The Angels changed their amateur scouting approach when they hired Matt Swanson from St. Louis and started “what appears to be a hybrid-model/tool-hunting approach.” As explained:

They’ve taken high-upside athletes early in drafts, and many of them have skewed young for their class (a trait model-driven teams target). The Angels pro scouting efforts rarely have a chance to shine in a typical way because the club has been patching holes around Mike Trout in perpetuity, never really undergoing a rebuild under current pro director Nate Horowitz. The few times when the Angels have moved a big league piece for a prospect, or when they’ve acquired a prospect to balance a trade, they’ve hit.

The signing of Shohei Otani also fell under the Angels pro scouting umbrella “and they nailed that.” Here’s more on Swanson from TheAthletic.com.

Angels player development has also undergone “significant changes recently, including multiple hires from non-traditional backgrounds.” If it’s about changing players’ swings, “to their credit, Angels dev staff has backed off some hitters for whom this type of swing was not working … and the swing has worked for a bunch of players in the system, but we’re skeptical of its universal prudence.”

If we are to value our future interest in this sport, we’re in present need of relief from an incessant ringing that permeates all regions of our cerebral cortex. This process helps, and adds to the noise.

On top of this being an odd time to be thinking about the future of baseball, with questions about how the June 2020 draft will even play out as a physical event, we realize there’s a constant due diligence. There’s no downtime in contemplating pressing issues, just more time to overthink it.

In trying to summarize,this back-cover blurb from Angels general manager Billy Eppler goes: “From scouting the basic tools to the integration of data to paint a more complete picture of a player, Eric and Kiley explore the wide array of strategies and methodologies used by Major League Baseball teams in their quest to identify the next impact player.” Eppler only seems to imply these two do it well.

We do trust ESPN’s Jeff Passan, who adds: “True insight into how modern baseball operates is rare, which is what makes Future Value such an invaluable resource. It pulls back the curtain and answers every question needed to understand the game today. This is nothing less than the definitive guide for baseball fans who want to be smarter about the game they love.”

Some good afternoon reading at ESPN:@joonlee on how MLB players are using video games to connect with fans: https://t.co/HYUZ9R3VRS@kileymcd unveils his 2020 draft board filled with inside dope: https://t.co/kGLNhZaLG0@Kurkjian_ESPN on Henry Aaron: https://t.co/z4OAGwN3LA

All in all, when you combine this with Law’s upcoming book, as well as what we’ve gleaned earlier this year from Bill Ripken’s “State of Game,” there’s added layers of information that can be beneficial for those who question why things work, why they don’t, and how good decisions can still lead to bad results, and then get magnified.

Don’t overthink with this book, but don’t over look it either. We don’t always trust our instincts. We do know books like these are only trying educate us, with entertainment a secondary goal. In the end, there’s nothing that defines success like a World Series title, no matter what road you take to get there. See the 1988 Dodgers, and 2019 Nationals. There were distinct thought processes that put those rosters together, and they made it work.

Unless this also somehow helps one better select a sweet fantasy team, we’re not sure what the ultimate value is having all this information amidst the masses, except to make more non-baseball people think they can figure everything out and be the next Freidman or Eppler, based on this template.

We’d rather not help encourage such a thing.

NEW!!! On Episode 375 of Hittin' Season, I spoke with @longenhagen about he & @kileymcd's new book, "Future Value," talking about how teams are trying to find their next superstar. Also, This Week in Phils History, chock full of sound from great moments!https://t.co/GNjLWqBsAn

2 thoughts on “Day 19 of (at least) 30 baseball book reviews for spring/summer 2020: Everything you might want to know about current talent evaluation but were afraid to ask”