“Wits, Flakes, and Clowns:
The Colorful Characters of Baseball” 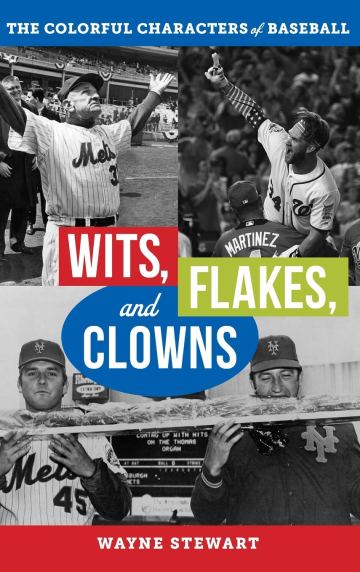 The links:
At the publisher’s website
At Amazon.com
At BarnesAndNoble.com
At Powells.com
At Indiebound.org
At the author’s website

The funniest thing we tried during this pandemic lock down was give ourselves a haircut. Even with adjustable beard trimmer, it looked like a kindergartner given his first pair of left-handed scissors and then trying to fix it with wheat paste as a styling gel.

Friends suggested we watch a YouTube video first, and “have the right tools.” My wife grabbed rose pruners and a slightly-used cat de-wormer to see if she could rescue it.

We expected to emerge with something between Howie Long and Howie Mandel, and a contract with Fox to air it.

One can cringe. Or find the humor in it.

“Humor is a side of baseball that I think is important,” Carl Erskine, the Dodgers pitching great, says in a back-cover blurb for this new book. “Stories in baseball are rampant. I don’t hear so much in football and basketball, but you get a baseball guy started and you’ll hear a lot of stories. There’s something magic about baseball. I think one thing about baseball that gets overlooked is the human side of players—and that’s what this book is all about.”

Even though we never thought of “Oisk” as a well-known good humor man — a nice fellow, expert on the harmonica,  for sure — it’s nice to see him alive and quoted.

As for some of the lunatics we used to see in the Dodgers’ and Angels’ locker rooms. …

Our own haircut-in-the-bathroom incident gave us a flash back to a time going into the Dodgers clubhouse and watching Mickey Hatcher with a towel around the shoulders of a teammate, giving him a buzz haircut. Maybe it  was some kind of charity thing. That’s being charitable. Anyone who knew Hatcher realized this couldn’t turn out well. While we can’t recall who was on the wrong end of this, he would likely want to remain anonymous.

In the 130-plus stories about those whose natural personality brought humor to the game — “a Whitman’s Sampler” of bios, as Stewart says — it’s not a surprise that few are Cooperstown Hall of Famers. Yogi Berra, Casey Stengel, Tommy Lasorda and Bert Blyleven fit that, which may explain why all were efficient communicators after their playing days. 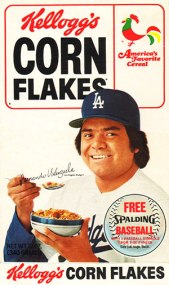 Hatcher deserves to be in a Hall all his own.

As well as teammates like Jay Johnstone. And Fernando Valenzuela, perhaps one of the most mischievous troublemakers in the Dodgers’ 1980s decade. He’s not mentioned in this book.

For this project, the players have been divided into four categories: Pitchers, position players, “princes of Pranks and Zaniness” and honorary mentions. It has an introduction, a conclusion, notes, a bibliography, index and author bio.

With that, we now say with a straight face were are finished with this portion of the review.

Characterized as a look into the world of major-league characters who’ve left us laughing, or were a bit odd, or even labeled eccentric, this is a book that should sell itself. Who isn’t in need of a laugh now?

The author should understand humor, then get out of the way. The subjects would supply the material. And plenty of it.

But after a read — and a re-read to see if we really missed any punch lines —  why isn’t this more enjoyable? Should we have lowered expectations?

Stewart’s bio has him as “professional writer and sports historian,” a teacher who has produced this one as book No. 34, past projects related to various topics, including an uneven bio of Stan Musial. None seem to be in the humor genre.

The 68–year-old resident of Amherst, Ohio uses his blog as a way to post things he also comes across. Find it at  waynestewartonsports.blog. His post generally reflect the style and depth of writing you’ll also get here.

Maybe our bar is set too high considering what we know about some of these guys, and what’s being fed to us here in this sanitized organization that generally comes off as a cut-and-paste effort, without a signal to the reader what is originally culled and what could be material from another website or book.  A Google search of “MLB + funny + crazy” could have likely produced more.

And, there are no photographs. It’s up to our imagination to see what these wits look like if we’re not familiar with them. 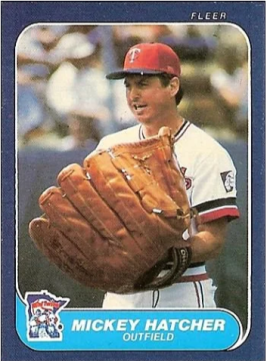 By itself, the bio given on Hatcher makes him as unfunny and unclever as one can be without just being a strange dude. His big, stupid laugh is about as good as it gets in baseball, and in life. We don’t hear it here at all. The writing doesn’t lift us up to the subject matter as it could or should.

It’s kind of like having one of those friends who tell you a story about something that happened to them, and as they’re laughing the entire time, they punctuate it with: “It was sooooo hysterical.”

You want to reply: Yeah, it really kinda wasn’t. But you don’t want to sound like 1995 Jerry Seinfeld. Apparently, chalk it up to “you had to be there” moments and let’s be cordial.

In an attempt to celebrate who have made the game one to laugh with and not at, those who haven’t taken themselves too seriously, this is an opportunity for someone to give serious consideration at taking another full round of swings at this topic.

Maybe we have some inspiration.

Oh, one other thing: Jim Bouton does not have his own entry, but is only reference a few times in other’s bios.

Baseball and spring training are delayed, but our baseball books aren't. For a lighter look at baseball, check out "Wits, Flakes, and Clowns: The Colorful Characters of Baseball" by Wayne Stewart.

Perhaps the value of this book can remind us that those who really could bring the hi-jinks have already lowered the boom of a book on us. If you’re in need of flashbacks in this time, maybe consider tracking down: 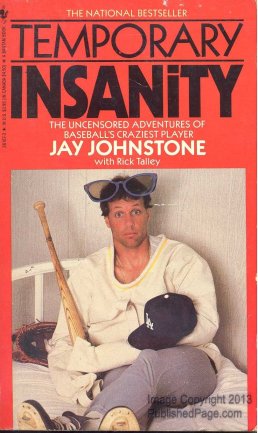 == Joe Gargiola’s “Baseball Is A Funny Game”
== Bob Uecker’s “Catcher in the Wry” (aka: “The Man who made Mediocre Famous”)
== Jimmy Piersall’s “The Truth Hurts” (which follows up “Fear Strikes Out”)
== The Jay Johnstone trilogy: “Temporary Insanity: The Uncensored Adventures of Baseball’s Craziest Player” in 1985, followed by “Over The Edge” in 1987 and “Some of My Best Friends are Crazy: Baseball’s Favorite Lunatic Goes in Search of his Peers” in 1990.
== Bill Lee’s “The Wrong Stuff” from 1984
And there’s also:
== “Joy In Mudville” edited by Dick Schaap and Mort Gerberg, which includes “The Curious Case of Sidd Finch” and Jim Bouton’s forward to “The Baseball Fan’s Guide to Spring Training (1989 Season)” that starts with:

“Many are called, but few are chosen,”
A quote from Seattle Pilots manager Joe Schultz in Tempe, Ariz., 1969
(also Jesus Christ, Jerusalem, 33)

One more hope (for the hopeless)

== “Big Sexy: In His Own Words,” by Bartolo Colon with Michael Stahl, Abrams Images, $24.99, 208 pages, supposed to be released May 12.
Our pre-order and requests for a review copy have turned up fruitless to date. 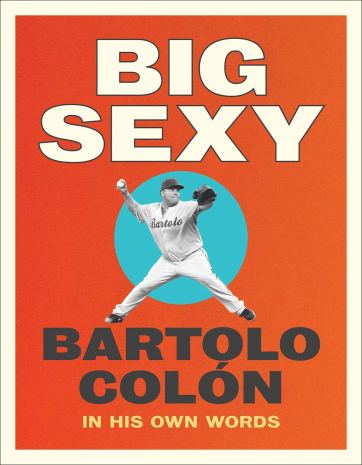 We just know that bios of baseball stars who could be on the cusp of Hall of Fame status often come out to support their career body of work, whether it be with testimonies from teammates or sabremetic breakdowns of their statistical achievements. Colon isn’t eligible for the Hall until 2024, on a ballot that will include many in his same “very good/should get in eventually” category – Chase Utley, Adrian Beltre, Adrian Gonzalez, Joe Mauer and David Wright. So why wait?
Plus, his media charm is what makes him a book candidate.
A four-time All Star with a career mark of 247-188, a 4.12 ERA (six seasons he finished in the top 10 in ERA) in 565 games, a career 46.1 WAR, with a seven-year peak of 35.6 ain’t bad – it’s comparable to current Hall of Famers Jack Morris and Jim Bunning, but more along the lines of Andy Pettitte, Dennis Martinez, David Wells and CC Sabathia. His most glorious season: A Cy Young Award with the Angels in 2005 (a league-best 21 wins against 8 losses, a 3.48 ERA in 33 starts, in the second year after the Angels signed him as a free agent). 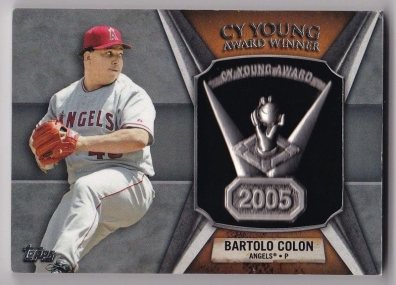 Colon’s 21 seasons with 11 teams seems to have termed out when Texas  tried to get something out of the 45-year-old starter for 24 games (7-12, 5.78) in 2019. Before that, his most fortuitous stop was three years with the New York Mets from 2014-16, where he twice won 15 games, had 14 wins in the other one, and hit his one-and-only homer as a 43-year-old in San Diego in ’16.
With his oversized stature, Harpo Marx crop of hair and playful nature, Colon reinvented himself several times, but his apparent discomfort speaking fluent English with reporters was also part of his mystique. Putting “his own words” now into a book, we hope, will be somewhat refreshing. Should it ever come out.

(Also: Look at the cover. What team is he pitching for? That’s about the worst rendition of a Topps baseball card we’ve ever seen).