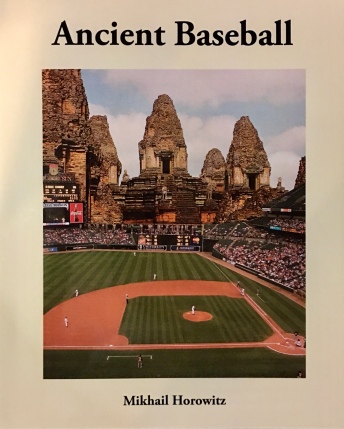 The links:
At the publisher’s website, and no where else on Amazon.com, BarnesAndNoble.com, Powells.com, or Indiebound.org. But the author does have an official site.

It arrived in a Manilla envelope, carefully stuck between two pieces of cardboard. The envelope was hand addressed, from a post-office box in Accord, New York. There was one “two ounce” stamp affixed to it, along with four “Earth Day” forever stamps, all upside down.

It came from a random recommendation from the Twitter account of  John Thorn, the official historian of Major League Baseball.

Ancient Baseball, by Mikhail Horowitz. A laugh every epoch. A couple of samples below. https://t.co/tXX8pHOyd1 pic.twitter.com/Ay7qX5N75I

From the inimitable Mikhail Horowitz, author/illustrator of the new book Ancient Baseball, a fresh take on Franklin P. Adams's "baseball's Sad Lexicon" (a.k.a. "Tinker to Evers to Chance"). pic.twitter.com/x9pJ3TdBZH

He also has a back-cover blurb: “Who knew baseball history could be so much fun? No more archive trawling for me – Horowitz sees baseball everywhere in the ancient world. Gorgeous, erudite, laugh-out-loud funny.”

It came, as well, with a stamp of approval by Tim Wiles, the former director of research for the National Baseball Hall of Fame: “Many have tried to explain baseball’s mysterious connections to time, eternity, mythology and human spirituality, but most such attempts leave us empty-handed. Mikhail Horowitz has caught lightning flashes of insight over and over again in this slim volume … Read it and reap.”

It came with these words, perhaps by the author, or publisher, or another who dared to decipher its true meaning:

“Ancient Baseball’ dares to go where no historical document has gone before, tracing the roots of America’s National Pastime to Greek, Mesopotamian and Egyptian antiquity, and ultimately back to the fossil record of the late Devonian. A work of peccable scholarship, ‘Ancient Baseball’ is destined to become a classic in its field, as soon as posterity can figure out which field, exactly, that is.”

In essence, it came out of left field. Fields left behind by those who thought the history of the game only went somewhere back to Britain and a bunch of kids who couldn’t figure out the difference between cricket and croquet.

It came with an introduction that asked: “It is the author’s hope that this modest volume will open a new field of baseball scholarship, one that will, at long last, reunite the boys of summer with the boys of Sumer.”

It came into being before Photoshop – as explained on the inside cover, “all images in this book were created by old-school, manual cut-and-paste with scissors, straight-edge razors and paper cement.”

It’s antediluvian and deliriously distracting in the same swing of a Louisville bat wedged in limestone.

It is palaeolitic, mesopotamianiac, pyramidic, and as historic as a Von Joshua card from the Ancient Israel and Judaea times of when box scores were kept on scrolls.

It shows proof that there was a Babe in the manger.

It has a spine that’s barely wide enough to include the title of the book as well as the author.

The Boys of Sumer and other baseball antiquities, courtesy the Royal Library of Alexandria (and Mikhail Horowitz). https://t.co/PsFf4sHALs pic.twitter.com/gs3zX4kNEU 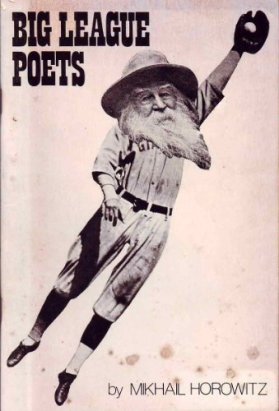 In researching more about the author who is better known as a performance poet, parodist, satirist, social commentator and editor, with a previous work entitled “Big League Poets” in 1978,  we found: “Horowitz … is also a maker of collages, monoprints and assemblages. His collages have been published in Exquisite Corpse, City Lights Journal, Jewish Currents, Chronogram, and other journals, periodicals, and anthologies, and have graced (if that is indeed the proper word) many book and magazine covers. Ongoing works include colored leaf prints that are run, when dry, through an antique typewriter and imprinted with short poems; Zen bento boxes; a huge collection of mythopoetically altered baseball cards; boxes of Animal Crackers that pay homage to extinct creatures; and broadsides made in collaboration with Carol Zaloom, with whom he shares an 1852 Irish quarryman’s house on 23 acres of woodlands, just north of the village of Saugerties.”

It should also be noted — or, maybe it doesn’t have to — that this book is a collection of things that have appeared in other publications like this in 2017, and even going back to 1978 and “Big League Poets.”

To that end, this was worth the wait, chapter and verse.

1 thought on “Extra inning baseball book reviews for 2020: History, as you cut-and-paste it to serve your hysterical purpose”