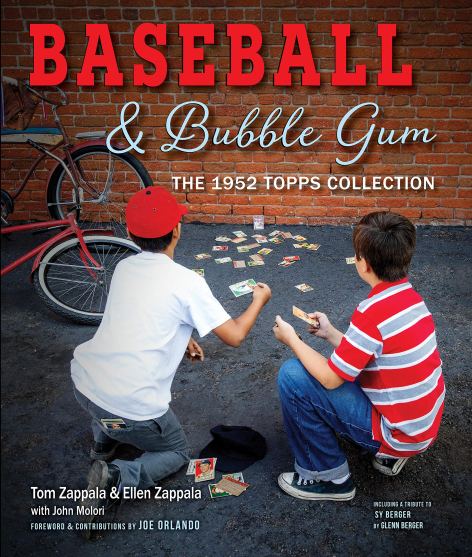 The authors:
Thomas and Ellen Zappala, with John Molori and Joe Orlando, plus photography by Christina Good

Your mom was part of a grand conspiracy, to deftly dispose of all your baseball cards. Except they didn’t really throw them away.

They put them in a different hiding place, with their all-knowing ability that sometime in the 21st Century, those cards’ value would fund their golden years and give you reason not worry about their financial security.

At least, that was the plan.

Some forgot where they hid them. Others sold them too early and were embarrassed on the return.

Yet, if they were truly nimble, they figured out how to bottle up and preserve the 1952 Topps set.

You got the gum. They squirreled away that extra cardboard.

How did this set even come about? As writer Scott Pitoniak explains in a new story posted on the Baseball Hall of Fame website:

“Marketing whiz Sy Berger, with a huge assist from graphic artist Woody Gelman, began designing a set of cards they hoped would encourage kids to chew more Topps bubble gum. Up to that point, baseball cards had not been overly popular among kids. But the gorgeously designed 1952 Topps set changed all that. Boasting colorful, up-close photographs of the players, facsimile autographs, team logos, hard-to-come-by statistics and mini-biographies, this 407-player set impacted the hobby like a fastball off the barrel of Willie Mays’ bat.”

At least Mays was included in that set, in his second major-league season. Ted Williams, Stan Musial and Whitey Ford are not. Williams and Musial had a contractual obligation to the other card company, Bowman. Ford was off in the Korean War and didn’t play that season. But 26 other future Hall of Fame were in that set, highlighted by Mickey Mantle. And Jackie Robinson. Bob Feller. Duke Snider (in action, when that often isn’t what is used for players in this set). Also are the rookie cards for Eddie Matthews and Hoyt Wilhelm.

In this glorious, simplistic portrait that looks postage-stamp ready for perpetual adulation.

== A rare Mike Trout 2009 Bowman Chrome Draft Prospects Superfractor autographed rookie card just sold at an online auction for $3.936 million, setting a record as it eclipsed the $3.12 million once paid for a 1909 Honus Wagner T-206 tobacco card sold in 2016. Vintage cards have been losing their luster, claims Dave Oancea in a story posted on FrontOfficeSports.com. It was Oancea who bought that Trout card on eBay for $400,000 and then turned it around for the record price.

== The first of a two-part story this week by Axios sports examines the current trading card boom, which seems to be activated by those finding something to do during stay-at-home orders. It links to symptoms of a larger trend – cards are becoming highly valuable assets, with a portofolio of certain cards becoming more than twice as much as stocks on the S&P 500 over the last 12 years.
But then, how are cards valued and rated? That’s part two of the story looking at the far more sinister side.

Baseball cards, like gold, are reaching record highs since the pandemic.

But can’t we just enjoy them for how they were originally intended?

“The sports memorabilia market sits at the intersection of sentimental interest and financial incentive,” says Laura Doyle, VP and collections expert at Chubb.

“Sports cards are the next generation’s art — buy what you like,” adds sports memorabilia appraiser Michael Osacky. “If the market goes down, at least you still have something you cherish — that you bought for a reason.”

Which is why we can appreciate this circle back to Topps 1952.

We’ll likely never own more than a dozen of these 407 pieces of art – it would depend on the price, condition and how it tugs at our heart. But we’ve never really considered the investment of doing so because, with our age group as the last of the Baby Boomers, these were not often on our radar unless we had a friend with an older brother who thought enough to hoard them from their dad’s collection. We found an entry point in the late ’60s and weren’t really aware of what came before them. Or how they could trend forward.

So with this book, a tribute to that collection as well as an explanation of how it came about, we feel we’ve got at least a better understanding of what makes this tops in its field. It has pop culture value, and real art value. It has sentimental value, and legendary value.

“Project 42” is my collection of artist renditions of the iconic 1952 Topps Jackie Robinson card. It’s a project I’ve started to teach my son about Jackie Robinson, baseball and art.
Always looking for new artists to collect! pic.twitter.com/VjYaq4LfuN

And here, it’s also humanized with a few paragraphs on each player, what made his career unique, and why it may be even interesting he’s even included in this collection. There are many layers to this project that still resonate today and add to the texture of its value, tangible or not.

First, enjoy the pullout section about those in this set who made the Hall of Fame. 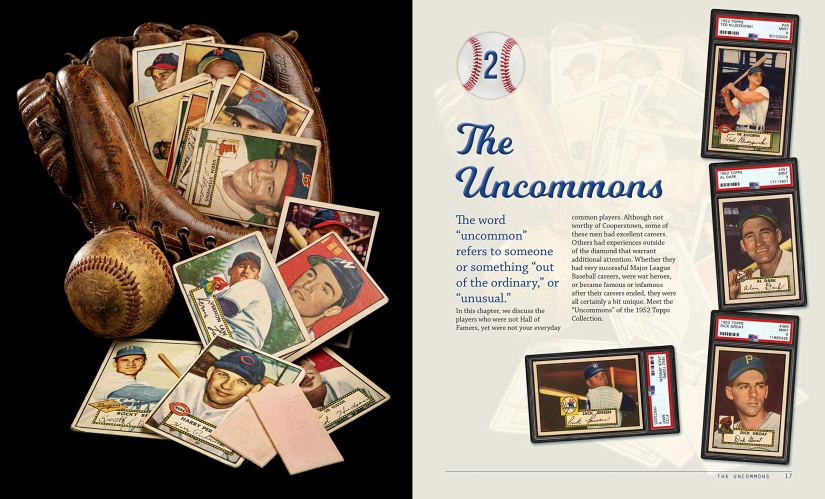 Then a reminder by the authors who categorized a group as “The Uncommons.” Like Lou Brissie, at the end of his remarkable comeback from a WWII injury. Or Johnny Berardino, the Cleveland Indians infielder in his last season who’d end up as a Hollywood soap opera TV star.

Dale Coogan (No. 87) wasn’t even in the big leagues in 1952. Or ’51. Or after that. The first baseman was up for only three months in 1950 with Pittsburgh, had just 31 hits, and played the rest in the minor leagues, some with the PCL’s Hollywood Stars. After getting a bachelors and masters at Long Beach State, then a doctorate at USC, he went into education and was superintendent of Ocean View Elementary School District in Huntington Beach. 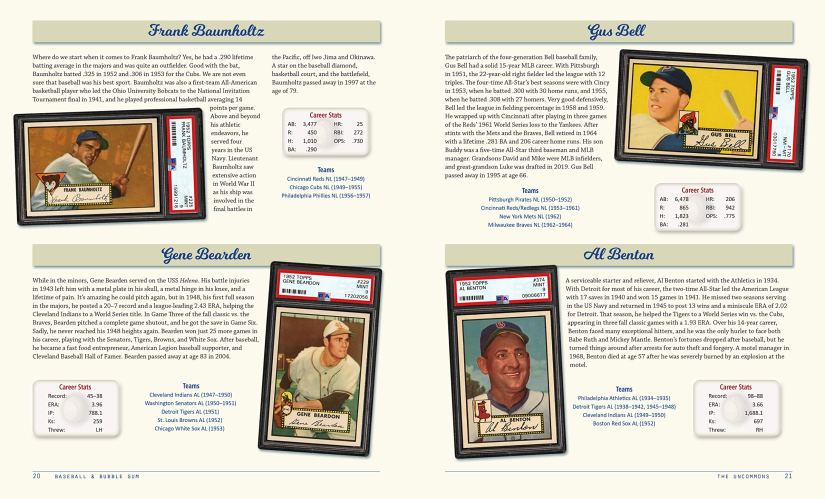 Even deeper: What about those commoners?

Matt Batts, No. 230, a backup catcher with Detroit at the time. Great name, eh?

Steve Bilko, the former PCL star who was with St. Louis at this point, Card No. 287. L.A. baseball fans may have known him more than Cardinals fans.

Con Dempsey, who had only one year in the bigs, ’51, but got into this set at No. 44, with a career record of 0-2 and a 9.00 ERA in seven innings. His career was derailed while in Pittsburgh when GM Branch Rickey tried to turn him from a side-arm pitcher to throwing overhand.

Somehow, the “Fightin’ Phillies” relief pitcher Jim Konstanty, just recently minted as the 1950 N.L. MVP, was by this time, as card No. 108, not having much left to offer, but still providing a sweet portrait.

Beyond that, the book thankfully continues to answer questions about the nuances of this ’52 Topps collection, explained by Joe Orlando, president and CEO of Collectors Universe, the parent company of Professional Sports Authenticator. Topps dabbled with including cards with its gum for several years before this dedicated venture, going up against the established Bowman. Topps cards were larger (2 5/8 x 3 6/8 inches) than Bowmans (2 1/8 x 3 1/8), which is a 50 percent increase if you do the math, and allowed for more information on the backs – stats, updated, that wasn’t always easy to track down for kids.

That was the magic.

There’s also, from a collector’s prospective, why there exists rare mint conditions of the Andy Pafko No. 1 card or Ed Matthews No. 407 card – think about rubber bands around stacks sorted in numerical order.

Included is a fascinating spread on the minute differences in some Mantle No. 311 cards – the ’51 Bowman may be considered Mantle’s true rookie card, but the ’52 Topps is the Mantle card for collectors because of its image (see the black-and-white photo it was taken from) and how variances in the Yankees logo, the end of his signature, and a small white dot really differentiate it from card to card.

‘Baseball & Bubble Gum: The 1952 Topps Collection is the latest release from Tom and Ellen Zappala, the husband-wife team that has collaborated with PSA on a number of vintage baseball card-related books.’ https://t.co/tQi8sw5thZ

Four hundred and seven percent above our expectations, rising to the level of what makes this set so important in the business, as well as the sport.

OK, just one small wish: If only we could also enjoy the card’s backsides.

If we never buy, sell or even hold one of these artifacts, we’ll at least have this pristine oversized tribute collection to enjoy, thumb through and let our mind wander. 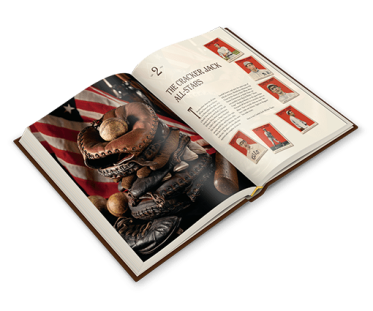 Many thanks to the Zappalas, who arrive with this after finding a template in doing similar coffee-table-sized treatment of subjects in award-winning productions such as “The T206 Collection: The Players & Their Stories,” “The Cracker Jack Collection: Baseball’s Prized Players,” “The 100 Greatest Baseball Autographs,” “Legendary Lumber: The Top 100 Player Bats in Baseball History,” and “An All Star’s Cardboard Memories.”

Mickey Mantle’s @Topps cards, arranged as a bar chart, reveal 1961-62 as most voluminous years. (The ‘52 is a reprint; he didn’t appear on Topps in 1954-55) @SABRbbcards @nightowlcards @CardboardHistry @VintageCardsOn1 pic.twitter.com/DnKOoQtTyS