Thanks to the Clippers for being the first official NBA/pop culture gear provider to “The Drill” — We will display it in full force once we get more wall space and drop a few pounds. It was a nice compliment to the unveiling of a vintage 1970s Lakers “Team Attendant” shirt we dug up from the archives.
For Episode 4, recorded Tuesday morning March 27, we have references here that you may not fully understand, starting with:

* Jon has an imitation we thought sounded more like Jim Gaffigan instead of
Andy Rooney but now we see why.
* A reference to Nobu (good luck getting reservations)
* Dwight Howard didn’t like the love he got in L.A? His loss.

* The 1988 movie “Big” with Tom Hanks, which has the fortune predictor Zoltar as a main character.  Not to be mistaken with Zlatan Ibrahimovic, who signed with the Galaxy. Zlatan’s full-page ad was discussed here at TMZ.com.
* Will Zlatan be as effective in L.A. as Johan Cruyff, George Best or David Beckham?
* Your Lancaster Jethawks start the season soon.
* The Rams sign Ndamukong Suh. Will they also get Odell Beckham Jr.?
* More background on Loyola of Chicago in the Final Four.
* More about the Dana Jacobson/Leonard Hamilton post-game interview situation after the Florida State loss to Michigan.
* What, the Redondo Beach Cafe has changed owners?
* Another reference to illustrator Jim Thompson, (Twitter @JimmySportTtoons) and the new drawing he has fashioned for Beto Duran: 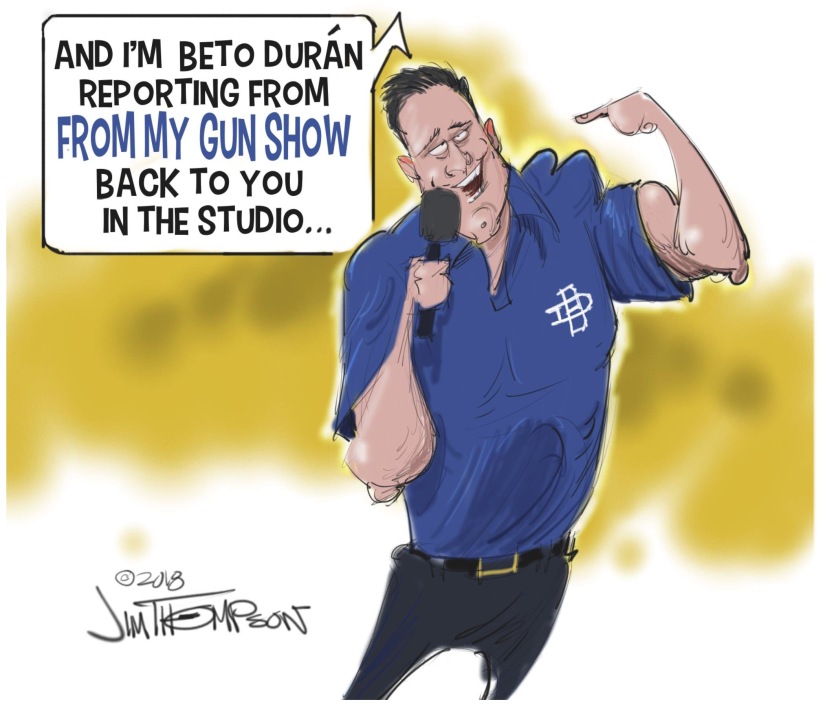 * What would it take Beto Duran to become the official mayor of Carson?
* When we start talking about how get around in L.A., we don’t want to sound like “The Californians.”
* As we spun some tales about the 45th anniversary of the Bill Walton NCAA championship game in 1973 against Memphis, we have this video… Watch and learn kids:

Perhaps we’ll have a “Show and Tell” segment now each show … Or as my son suggests, “Catholic Tom’s Confession Time.” Whatever cleanses the soul.
Thanks for watching. You can also find it at Facebook.com.