The book: “Brothers in Arms: Koufax, Kershaw and the Dodgers Extraordinary Pitching Tradition”
The author: Jon Weisman
How to find it: Triumph Books, 384 pages, $19.95, due out May 1, but copies are currently being shipped by Amazon.com.
The links: At Amazon.com, at the publishers website. 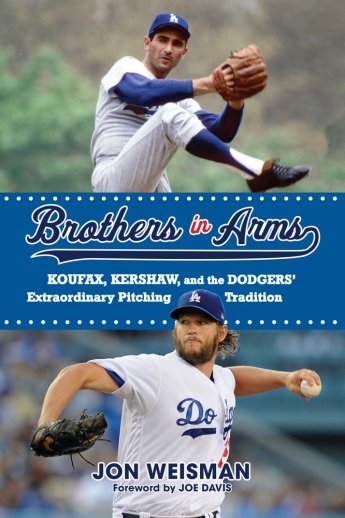 A review in 90-feet or less: In this case, it should be limited to 60-feet, 6 inches.
Connecting dots in a sports franchise’s history can turn up a lot of interesting coincidences, or reinforce a pattern of success.
The given narrative we hear so much – The Dodgers are all about a durable, dependable and distinguished pitching resume – is reinforced by many metrics.
* A record 12 Cy Young Awards won since the thing was invented some 60 years ago (the next closest franchise is seven by Atlanta, Philadelphia and Boston).
* The first relief pitcher to be so dominant that he had to be given the first Cy Young, setting records still unmatched. The second reliever to win it in a Dodger uniform was also record-setting.
* The players listed 1 and 2 in MLB record books for consecutive scoreless innings pitched is the same in the Dodgers’ record book.
* The most important arm surgery in the history of sports happened to a Dodgers pitcher. And it worked to where it’s common (too common) in the game.
* The first major person to experience the freedom of free agency? An All-Star pitcher who left L.A. for Atlanta.
As the Dodgers send Clayton Kershaw to the mound for the second time this season, his career ERA already down to 2.36 in 1,941 IP, we are able to appreciate the beauty of this project by Weisman — a former L.A. Daily News sportswriter, author of two versions of “100 Things Dodgers Fans Should Know & Do Before They Die,” and a former Dodgers’ front man for their digital and print content, including the work on the “Dodgers Insider” blog.
Many of these Dodgers are still around to put their time, and their accomplishments, into some context. Weisman is the best equipped journalist to do it. 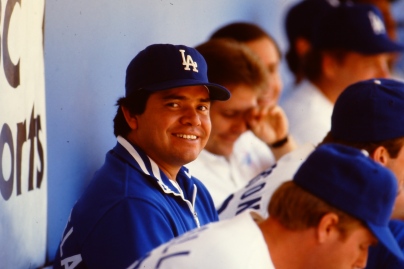 The elusive Koufax? Well, you can’t have everything. But there’s Clayton Kershaw, Orel Hershiser and Fernando Valenzuela (left), for starters. More reporting was done by talking to Peter O’Malley, Tommy Lasorda, Fred Claire, Rick Honeycutt, Claude Osteen, Burt Hooton, Jerry Reuss and Tommy John in addition to catchers Mike Scioscia, Jeff Torborg and Steve Yeager, plus team historian Mark Langill and MLB historian John Thorn.
Spread over eight chapters, Weisman divvies up the more than 50  pitchers in Dodgers’ Brooklyn and L.A. history depending on era and periods of domination. He also properly categories “hired hands” like Kevin Brown and Zack Greinke, highlights the “international rotation” of Ramon Martinez, Chan Ho Park, Ismael Valdez and Hideo Nomo, and ties it all up with “The Magnificent” Kershaw.
And the “ancestors” also matter, according Wesiman, who frame it:
“Nothing was preordained to dictate the flow of great pitching that the Dodgers have known since the end of World War II. Before then, the Dodgers were scavengers, occasionally stumbling upon a prize arm without paying any mind to how it got there.”

A few Hall of Famers even passed through in the pre-Boys of Summer era. Consider the likes of Jim Creighton, who died at age 21; Brickyard Kennedy, who won 174 games but never covered first base; Nap Rucker, who “stands as the most underappreciated Brooklyn pitcher” in the early 1900s; Burleigh Grimes, the spitball machine; and the lyrical Van Lingle Mungo.
Also included because it matters in a project like this: The franchise’s career Wins Above Replacement leaders. If you had Dazzy Vance (61.8), the first Hall of Famer with a Brooklyn cap,  at No. 1 over Don Drysdale (61.3), Kershaw (57.2 and climbing), Koufax (53.2) and Don Sutton (50.8) as your top five, consider your savant status verified. The only other active player on the Top 50 – closer Kenley Jansen (13.4) — trails relievers such as No. 36 Jim Brewer (15.4) and No. 39 Ron Perranoski (14.9), with no sign of Mike Marshall or Eric Gagne.
Mixed in with the names one can probably recite from memory, Weisman also gives a period nod to someone who had a “Moment in the Sun,” like a Dan Bankhead (the first black pitcher in MLB history, four months after Jackie Robinson came up), Rex Barney and others.
(One more morsel you may pick up on if you read close enough: Hershiser holds the record for most stolen bases by a Dodgers pitcher – six.)
For a franchise that has no one close to winning the high-bar of 300 career games – Don Sutton’s 233 is as good as it gets, with Kershaw needing to more than double the 141 he has through his first 10 seasons, given that he’s now 30 and may go free after this season – it is amazing to put it all under one roof to examine how it got done.

As long as we can avoid too many mentions of Dave Goltz (it does), there’s not a lot of dancing around Pedro Martinez (there isn’t, but a reasonable explanation of why he was traded is offered), acknowledgement that the team’s history could have somehow been even greater if it signed Tom Seaver out of USC after taking him in the 10th round of the first draft in 1965 (there is, but no mention that Seaver asked for $70,000 and the Dodgers turned it down), and, finally, a nod given to longtime pitching coach Red Adams (there are a couple of them), we can endorse this as a history book that must be included among any other done on the franchise’s success story.

How it goes down in the scorebook: 1-assisted with lots of backward Ks (we’re still not sure why the catcher always gets credit with the putout on a strike out, but we’ll let that one go. For now).

BONUS Q&A: With Weisman, via email:

Q: What was the coolest did-not-know-that tidbit you came across in the research for this?

A: I feel like I was on the right track when I started the book by writing about how baseball’s first teen phenom and tragic icon, Jim Creighton, pitched in Brooklyn (though not for the Dodgers) in 1860. But the most resonant for me was coming across the September 1951 column by Tommy Holmes of the Brooklyn Daily Eagle that absolutely ripped Don Newcombe — a hero from the Dodgers who was having an outstanding season — limb from limb. Today, Newcombe is revered, but I don’t think enough can be stated about the pressure he was under as a Dodger, from outside the organization as well as within. Think about the excessive grief Clayton Kershaw gets for not yet being a World Series champion, multiply it by, I don’t know, 100, and you have Newk. Unfathomable, isn’t it?

Q: Did you attempt to talk to Koufax or just assume it was not going to happen no matter how much effort you put into it?
A: I did attempt it, but I think once I left the employ of the Dodgers (two months after I began doing interviews), my chances of it happening sank precipitously. In some ways, not working for the Dodgers helped with the book because I wasn’t covering games on nights and weekends like I had been, but I’ll admit having a Koufax interview would have been a coup. That being said, when I turned to his 1966 memoir as one of my primary sources, I found it extremely insightful.

Q: What person who you interviewed gave you the most surprising insight? (I like Reuss talking about Fernando’s effectiveness with deception)
A: Yes, I really enjoyed talking to Reuss. Orel Hershiser is able to speak so articulately about pitching, I might nominate him, except that probably doesn’t count as surprising. Perhaps Chan Ho Park and Ismael Valdez, who spoke with me at length not only about their own careers but their peers, namely Ramon Martinez and Hideo Nomo. Park in particular was interesting because he was a Nomo fan before the Tornado came to the U.S.

Q: Who is the most forgotten pitcher in Dodger history that deserves more recognition for what he accomplished, pre 1945 or post?
A: So many choices — which is another reason why I’m happy the book exists. Ralph Branca, who kicks off Part 1, is a good one, because so many people know him only for one bad pitch as opposed to being the arm that in many ways helps launch the Dodger pitching tradition. I also might make an argument for Claude Osteen (above, center), who pitched in the shadow of Koufax, Don Drysdale and Don Sutton but absolutely shined for several seasons.

Q: Why is there no chapter on Dave Goltz?
A: Ha – well, he is mentioned five times in the book, which is probably sufficient — enough to play a small role setting the stage for Fernandomania. But the interesting thing on Goltz is that in this era, as a 30-year-old coming off a 4.16 ERA (106 ERA+) with the Twins and a low strikeout rate, his free-agent deal with the Dodgers probably would have drawn a lot of grief even before he threw a pitch, let alone started the 163rd game in 1980.

= Weisman, who has a very important role as himself in the documentary “Bluetopia: The LA Dodgers Movie” and is the VP of Corporate Public Relations at Showtime, has been previewing the release of the book on his DodgersThoughts.com blog.
= Another Dodgers’ related pitching book released this spring: “Koufax Throws a Curve: The Los Angeles Dodgers at the End of an Era, 1964-1966,” by Brian M. Endsley (due May 14). It is a follow up to the 2015 title, “Finding the Left Arm of God: Sandy Koufax and the Los Angeles Dodgers, 1960-1963,” which also follows up on “Bums No More: The 1959 Los Angeles Dodgers, World Champions of Baseball” from 2009.
= More Dodgers-related books coming up for review this month: “The Dodgers: 60 Years in Los Angeles,” by Michael Schiavone

3 thoughts on “Day 3 of 30 baseball book reviews for 2018: How the Dodgers’ pitching history has been a win-win-win-win-win arms race linked by greatness”