Got any sort of opinion about how the presentation of the Dodgers-Diamondbacks game Thursday exclusive to Facebook Watch?
Even as we went through the process of creating a Facebook account that we will now delete, we can report there was nothing as intrusive as buffering issues or pornbots.
We saw minimal damage to what otherwise would have been a SportsNet LA production here and Fox Sports Arizona locally. Rick Waltz’s pedestrian play-by-play work was best when turned over to Orel Hershiser or Eric Byrnes, but it was evident that Orel was the real true pro in the booth, and Alanna Rizzo did her typically fine work on the field getting to both dugouts on a “neutral” broadcast.
(Byrnes … Imagine him and Rex Hudler in a booth together. One would only need a potted plant — no pun intended — doing play-by-play to get that broadcast off track in a hurry. We didn’t realize Jeff Spicoli was going to be taking our time away from an otherwise midweek day game).
The Dodgers’ 5-2 win was augmented by some interesting viewer commentary along the way — some that we actually could read and capture before it sped by on the right side of the page and disappeared somewhere.

How the hell can #Facebook and #MLB screw this up? The MLB app live streams games every day, perfectly.

(By the way, to eliminate that feed, they kept telling us to “swipe right.” The assumption was we were on a smart phone. Those of us on a laptop had no clue why they kept saying that… and once we figured out how to get ride of the thing they called “noise,” we realized we missed the interaction).
It appears on Facebook MLB Live there were 188K total views (people who came in and out), with a high of about 38K at one point, and some 27K comments posted.
From what we could gather, here’s some stuff to consider about the broadcast team, the production and just getting used to this experience (creative typos belong to them): 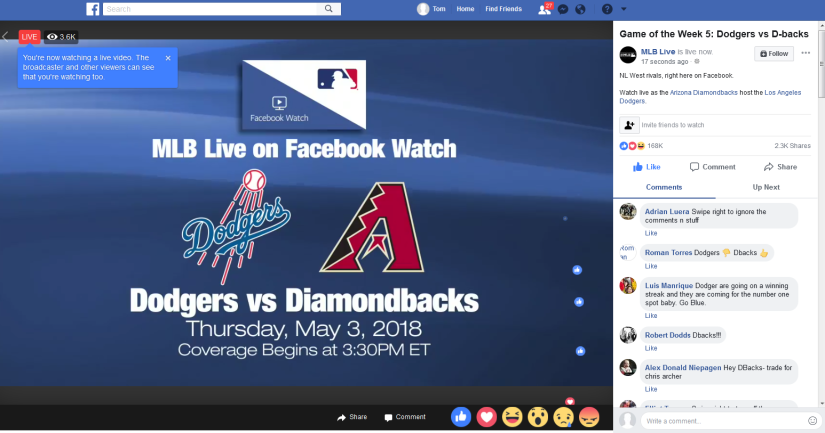 Tom Warren How long have we had computers & mobile devices? & people still can’t figure out how to stop the comments.

Gary Karr How many comments are being posted by Russian bots?

Gavyn Tatman (Oklahoma Umiversity second baseman): Just got in trouble for watching my dodgers in class!! I don’t care!!! When the dodgers game is on I have to watch it!!! Thx mlb for the live stream!!

Pat Lieberman Don’t know why it has to be on facebook. Because of that not on mlb. Nice to pay for something and have to watch it on compuier.

Dolores Sanchez These announcers are so self-absorbed. Forget about the game, talk incessantly about yourself. Who cares!?!

Nancy Miller Friend Who came up with the stupid idea of putting the game on FB instead of TV?!?!? Please don’t do this again.

Tyler Lee I just want to watch this on mlb.tv not Facebook

Lauri Morrill This is not anywhere as clear and constant a picture and audio as on TV. Wouldn’t ever replace my TV for the Dodgers! 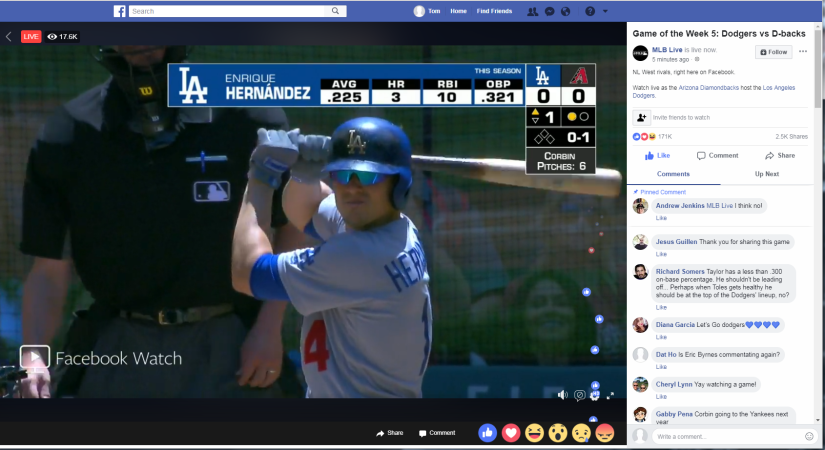 Anthony Shaieb I had to un deactivate my FB account to watch this game. I guess when you have MLB AT Bat with MLB TV, they blocked it it when its on FB. fk Fackbook. I cant miss a game with Corbin. Had to break down and log back in

Chris Speer facebook if you are going to do this you need to hire some tech people from MLBTV, Amazon, Netflix someone that can make this watchable i watch these all the time this frezzes about every 2 seconds

Paul Garza Jr I am getting AT BAT updates before the play is shown on the screen. MLB – you need to fix this. Not a good viewing experience.

Keiko Van Meeteren Who wants to watch on FB? Not me, kind of a rip off to Spectrum customers who don’t want or need FB. Might have to take some getting use to. I have Spectrum fort the only reason to watch Dodger games! PERIOD.

Geoff Kin blacking out people who paid for MLB package on their BIG SCREEN is complete B.S.

Sean Tressler FB needs to do a better job of showing hitter stats etc on screen, not just this tiny box with the general game status and pitch count.

Linda Bitzer Sands Watching this game on the Facebook Video app on my AppleTV. Big screen, and I can turn off the comments

Kathy Sprague Lonskey Love the Dodgers, but because of the Facebook feed, I can’t get my regular feed on my TV as I usually do.

David Quiñones This is a way better live stream than the Fox Sports GO app on my Xbox One. Wish we could watch ALL games on here but could do without these commentators.

Adam Dickerson PLEASE GIVE US AN OPTION TO HAVE NO SOUND FROM ANNOUNCERS!

Kyle Coffin I think Facebook Watch should be the first to pioneer a broadcast where just the natural sound of the ballpark is all you hear. Put mics all over the field and have NO broadcasters.

Misty Hall Up the resolution on the broadcast, kill the feed (way too toxic) and you’ll have a decent show here

Carrie Scalise Again, the comments are so numerous and moving so rapidly you can’t even ‘Like’ if you wanted to. Why even include a comment feed with Facebook Watch if nobody can comment or likeup when the comment is made? Also, there’s no way to save this comment feed to review at a later time. What’s the point of allowing comments during Facebook Watch?

Stacey Neill I wish it was on TV too. I don’t like these guys yakking and yakking, I like Orel though. I can’t record it now to watch later tonight.

Linda Maniscalco Horton FB screen doesn’t display the name of the current batter only the pitcher. It would be helpful to see who is at bat and their statistics, on deck and in the hole also.

Lynn Camomile Hate that I have 3 big flat screens, an MLB subscription and Sling TV – and I’m having to watch this on a laptop computer or phone!

Chris Stewart I’m in Iraq, are you kidding me? This is awesome, that I can see this right now.

Joacim Torkelsen Love the broadcast! This is a great game to watch as it’s nearing midnight here in Norway 🙂

Mario Lopez Finally get to watch the Dodgers on TV.

Janice Morris Cuneo Waiting in valet line to pick up my daughter watching the Dodgers on my phone. Gotta love it💙

Russell T Perkins No issues with my feed on FB, and I’m loving that I can watch it for free while I’m at work! Thanks FB!

Pete Estrada As a staunch TimeWarner hater I don’t have access to too many Dodger games. This is awesome! Thanks FB!!

Desmond Hobson Thanks, Facebook, for the small favor of being able to watch the Dodgers play! I only get to watch about 20 games a year since I don’t have SportsNet LA.

Lorraine Bissett Weadock Can you do this EVERY GAME?!! PLEASE?? I NEED TO WATCH MY #1DODGERS

Anna Schiff i like that it’s on facebook. im a college student and never get to watch the games so this is great! i understand the complaints of people who pay to watch on cable, but it’s just 1 of 162 games!

Rick Brown I really wish this was just on fox sports, these anouncers are pretty horrible. Sorry, Facebook for MLB is just stupid. And I’m watching this on my phone rather than tv

Rob Gudgeon Looking forward to watching more games on Facebook live. Very much enjoy the commentary and info being shared.

Patrick Shields I love the facebook format, as long as the TV option remains. I don’t like being forced to one option, however.

JM Moralez THANKS TO MLB AND FACEBOOK FOR DOING WHAT DIRECTV CAN’T DO, BRING ME DODGERS BASEBALL

Marina Gonzalez Sad day when you have to watch you baseball team on Facebook, on your phone. Irony is I’m happy I get to watch.

This is all i see on FB pic.twitter.com/ubKtCUlS7Z

1 thought on “Today’s Dodgers’ Facebook Watch party: Did it fulfill your wildest dreams and streams?”