“This race has represented the gateway to summer. Memorial Day and the Indianapolis 500 have been intertwined for almost a century. And this event’s uniqueness is unquestioned. As in any sport, the cast of characters is constantly changing, but in the ultimate, the name itself – the Indianapolis 500 – transcends all else.
“

Like the jockey who wins the Kentucky Derby, or the golfer who wins the Masters, or the physicist who captures the Nobel Prize, the winner of the Indianapolis 500 has his life changed forever. It is his calling card … forever. He and his team will have crossed the finish line first through a combination of skill, bravery, engineering, strategy and lucky.
“Any man who drives here is compelled to leave fear in the back seat. And while it goes unspoken for three hours, you must look the grim reaper in the eye and not blink.”
= Al Michaels, in the opening to the ABC telecast of the 1999 Indianapolis 500.

As ESPN Classic airs two-hour portions of the Indianapolis 500 races going back to the late ‘60s during lead up this week to the 102nd event on Sunday at 9 a.m. (after an hour-long pre-race show), nostalgia can get clouded by Michaels-like hyperbole as we are reminded how much ABC has put into covering this event every year since 1965, much of it on tape-delay.
And now the network is on its final turn.

NBC has outbid ABC to take over not just part of but all the Indy Racing League coverage for the next four years, starting in 2019, including the Indy 500.
“We have had a wonderful and rewarding relationship with the Indianapolis Motor Speedway, the Indianapolis 500 and IndyCar and it has been our distinct honor to be partners for so many years,” said Burke Magnus, ESPN’s Executive VP of Programming and Scheduling, this week. We wish them all the best in the future.”
ABC’s historic evolutionary run at Indy is somewhat breathtaking and spans generations of broadcasters.
From 1965-’70, this event was part of the ABC “Wide World of Sports” umbrella. Charlie Brockman, an Indianapolis media personality who had called the closed-circuit broadcasts in previous years, was called on to do play-by-play, and Chris Schenkel did it the next year.C veteran Chris Schenkel calls the 1966 race telecast. With Jim McKay coming on in ’67 as the lap announcer, and the first time it was in color, this was a role he kept (along with host) for 20 of the next 21 years – Keith Jackson got to call it once, in ’75.
Most of the time, Jackie Stewart was at McKay’s side with Chris Economacki and Bill Flemming in the pits.
From ’71 to ’85, it was a same-day tape-delayed show so that it could be displayed on Memorial Day prime-time Sunday.
It didn’t go live until the 1986 race – Jim Lampley making the call, with Sam Posey as the analyst.
Paul Page took over as the call with Bobby Unser and Sam Posey from 1988-’98, and again from 2002-04. Bob Jenkins (1999-2001), Todd Harris (’05), Marty Reid (’06-’13) and Allen Bestwick (2014-present) have also called it. The two main analysts – Scott Goodyear and Eddie Cheever – have been doing it since 2008, with Goodyear joining the cast in 2002.
Along for the ride once came David Letterman, an Indiana native who would go onto become a team co-owner with Bobby Rahal, as a pit reporter in 1971 — he was working for a local Indianapolis TV station at the time. Actor Jason Priestley was somehow included as a race analyst in 2001.
Dr. Jerry Punch will be doing his 27th and appearance in the pits — the most appearances by any ABC broadcaster. Jack Arute did 25 of them from 1984-2009.
Race producer Kate Jackson, who became the first woman to have such a job in 2015, will oversee Sunday’s race and said in an interview with the Associated Press: “I refuse to acknowledge it’s our last. I will only say we’re not doing it the next three years, but I refuse to say beyond that. It’s without question the most heartbreaking company loss I’ve ever experienced. I’ve seen other things come and go, and that’s the nature of the business — there is a lot of competition. But this one stung in a way others haven’t for me.”

For us, the replays on ESPN Classic continue to show how far the telecast has evolved technically, graphically and with audio. But probably never will you get the shot at that ABC did of the famed Parnelli Jones waiting in his No. 40 car for the re-start of the 1967 race — while puffing on a cigarette. And then tossing it over at team owner Andy Granatelli before he was ready to drive.
“A final word from Parnelli Jones to Andy Granatelli, with a flick of the ash from the cigarette,” as McKay noted with some humor.
This year, ESPN has 110 cameras to use, more than it ever has, including four Super Slo-Mo cameras in all four turns.
In 1983, Al Unser and Rick Mears were the first to have onboard TV cameras. This year, more than one-third of the field will have one, including the cars of Danica Patrick, Marco Andretti, Helio Castroneves, Scott Dixon, Ryan Hunter-Reay, defending 500 winner Takuma Sato, Josef Newgarden, Graham Rahal, Jay Howard, Robert Wickens, Zach Veach, Will Power and Ed Jones. Sato and Rahal will also have a Visor Cam mounted to their helmets.

* Win, lose or … Danica Patrick, in her final Indy 500 race, has been named host of the 2018 ESPY Awards from the Microsoft Theater at LA Live on July 18, broadcast live on ABC. She will be the quasi-awards event’s first female host, for the show’s 25th year in existence. 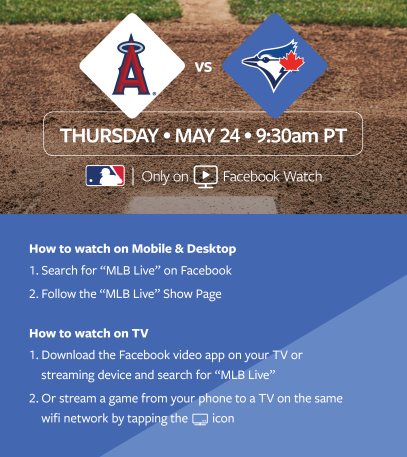 * As much as we enjoyed the comments running down the side of the Facebook Watch screen during the Dodgers-Diamondbacks streaming on May 3, there could be even more colorful language from Toronto viewers who witness their Blue Jays hosting the Angels (Thursday, 9:35 a.m.) in the latest edition of the somewhat underwhelming online coverage.
It means there will be no local Fox Sports West feed, nor will the Angels’ home channel repeat the game later in the day or night.
With the MLB Network production, Scott Braun draws the play-by-play assignment with former Angels star Wally Joyner as the analyst along with Cliff Floyd, the former MLB outfielder who works for the Blue Jays’ Sportsnet feed in Canada.
The Angels’ game at Seattle on Wednesday, June 13 at 1:10 p.m. will also be a Facebook Watch exclusive.
Meanwhile, Joe Buck and John Smoltz have regional coverage of the Angels at Yankees in New York on Saturday (Channel 11, 4 p.m., going to 65 percent of the country; another 15 percent will get a Joe Davis-David Cone call of the Astros-Indians game from Cleveland in that window).

* ESPN’s thurst for the UFC has become apparent after years of denying it had much interest in the mixed martial arts event that has been so dear to Fox.
The Hollywood Reporter revealed that, after a five-year, $750 million digital deal with the UFC and the ESPN+ app, this linear deal for five years bumps the total package to $1.5 billion. The top UFC fights will remain on pay-per-view, with fights also appearing on the sport’s owned Fight Pass pay on-line streaming service. ESPN made the announcement official Wednesday.
“ESPN’s unparalleled multimedia platform is the perfect home for the UFC and will deliver tremendous value to both parties,” said ESPN president and co-chair of Disney Media Networks Jimmy Pitaro. “UFC fans are passionate and loyal and we plan to bring the full power of ESPN’s live coverage, powerful storytelling and unmatched distribution to serve them in an unprecedented fashion. We can’t wait to get started.”
Fox Sports had only been been paying as much as $130 million a year since it got involved with the UFC in 2001. Fox is in the midst of closing a five-year, $1 billion-plus deal with WWE to carry “SmackDown Live” on its networks starting in October, 2019.