We’ll set up the sports media pins for this weekend, you can knock ‘em down:

* Britney Eurton, our TVG reporter-turned-NBC SoCal reference point for all that is national Triple Crown coverage, gave us Santa Anita-based Bolt d’ Oro as her Kentucky Derby pick back in early May. Turned out, Justify was not just the stunner in the mud, but he’s come out pretty clean as a Triple Crown contender headlining Saturday’s 150th Belmont (Channel 4, 1-to-4:15 p.m. with the race at 3:37 p.m.), which should attract more than just casual thoroughbred TV viewers. 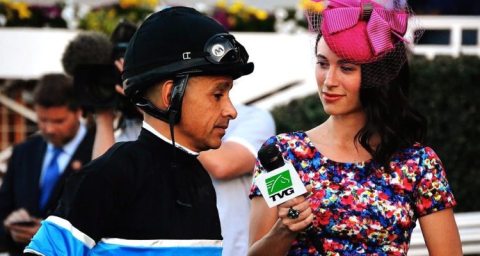 Bolt d’ Oro hasn’t disappeared in a thunder clap – he’s running in the Met Mile as one of the older horses in that field at Belmont on Saturday, which will be part of the overall six-race NBC block of coverage (also on NBCSN, 11 a.m. to 1 p.m.).
And while it would be justifiably so for Eurton to align herself with those who hope, wish and predict a three-peat for Justify, the one we still lay claim for building the foundation of fame in winning the Santa Anita Derby last April, we’ll let her explain her thinking after we caught up with her Thursday morning from New York:
“For the industry, for the connections, the Triple Crown is always what you root on, right? But I think many more were confident when American Pharoah came in (in 2015) because of how impressive he was in completing the Preakness. A lot of people after watching Justify in his Preakness win were skeptical about how much he’s done in just a short amount of time. I actually do think we’re not giving him enough credit for what he has achieved. It’s remarkable to have five wins at this level, with the weather conditions as they were, to even be here to compete for a Triple Crown.
“But all of that said, my heart is with Justify, but it’s asking a lot for him to complete this bid, and I saw him run this morning over the Belmont surface and he looked phenomenal. He doesn’t look like he’s losing any weight. But in my head, if I was betting, would be in another direction with Hofburg. He has the breeding.”

Then again, there’s the odds that everyone watching will have some vested interest in Gronkowski.
Named after the New England Patriots tight end Rob Gronkowski, he didn’t make it to either the Kentucky Derby or Preakness but he adds a spicy narrative to this one.
“He’s such a question mark because he’s never raced over dirt, a mile-and-a-half … just a lot of unknowns,” she said. “But one thing we do know is he’ll get plenty of play. Honestly, there are people on both sides of the spectrum on this, whether a horse named after him helps the industry – I think it does. Anytime you get a superstar or celebrity talking about this, you’ll have more casual fans tuning in, some may root for him, some will root against him, I love how involved he’s getting, and if we can expose the industry to more people because of that, why not? It adds another dynamic.”

*Another notable item on the NBC Belmont coverage: After trying out a special aerial camera over the backstretch at the Kentucky Derby and Preakness Stakes,  one that sits about 15 feet above the track and can travel up to 80 mph, it will be stretched this time to include more than 2,700 feet of track this time.

*And Bob Costas, contractually obligated to host the Preakness since it involves Triple Crown implications, continues to talk about how he’s going to lay a little lower in his post-Olympics TV career. As he confessed to New York Newsdays’ Neil Best:
“People say, ‘Oh, you might get bored.’ No, not in the least. …
“You don’t stop being a fan, you just stop having to book a flight or check into a hotel every week . . . Listen, it isn’t that you stop liking ice cream. It’s just that you get to a point where you prefer smaller portions.”
Smaller portions of Costas. …. Think about that as he jockeys for position during the trophy ceremony in New York on Saturday.

*FS1 changes announced Thursday: Joy Taylor officials leaves “Skip And Shannon: Undisputed” to become the news anchor for “The Herd with Colin Cowherd” starting June 18 and Jenny Taft takes her former role starting July 23.
So what has happened to …. hang on, we’ll get it … sounds like … Kristine Leahy?
She’s mentioned in the book that came out this week, “Become An American Ninja Warrior: The Ultimate Insider’s Guide,” so there is that …

* How close did the New York Yankees come to staging a “boycott” of ESPN? Depends on what you believe in semantics in the course of a threat versus actually doing it.
Ripe with the subtext of the Yankees now managed by former ESPN booth analyst Aaron Boone, the headlines that topped the stories reporting on this earlier in the week really depended on who wanted to push the word “boycott” and who shied away.
The story involved ESPN trying to convince the Yankees to move a Sunday, July 8 game in Toronto from 1 p.m. to 8 p.m. local time for “Sunday Night Baseball.” The problem is, the day before that announcement, the team agreed on the logistics of playing a doubleheader in Baltimore on Monday, July 9.
The New York Post headline on June 4: “Yankees threaten to boycott ESPN personnel in schedule war”
The New York Times softened it up a bit on the same day: “Yankees Angered by ESPN’s Attempts to Move Their Game”
Somehow, the Chicago Tribune chimed in as well: “Yankees echo Joe Maddon’s ‘Sunday Night Baseball’ schedule gripe, weigh ESPN boycott”
Then, it got settled with the MLB intervention.
A BleacherReport.com aggregated story also June 5: “Yankees Moved Off ‘Sunday Night Baseball’ Game After Threatening ESPN Boycott”
The New York Times follows up on June 5: “ESPN Relents, and the Yankees Are Spared a Travel Nightmare”
So how did ESPN handle it on its website? Trying to make it seem all pretty lighthearted with no boycott mention: “Let’s play 3: Yanks won’t have to do it in 24-hour span”
The net result: The Dodgers-Angels game from Anaheim will replace that Yankees-Orioles telecast on July 8. How many Dodgers’ fans will boycott it?

* That leads us into some of our more intriguing Twitter feed posts of the week:

Sunday Night Baseball ratings down in all ten weeks this season: https://t.co/7QOfTvbpVx

What will I do with the $60 I save annually not subscribing to The Athletic?
I will buy more newspapers!!! #TryingToKeepHopeAliveForTheFreeFlowOfCredibleInformation

Just heard @RichEisenShow host preface a question to his guest: “Obviously we can tell by your accent that you’re not American.” Hmmm. What does an American sound like?

* In light of how sports-and-gambling news flow is bound to change with the recent Supreme Court decision to allow states the right to start taking bets, the VSiN team in Las Vegas has added retired CBS Sports Radio CEO Dan Mason to the team in an advisory role. VSiN came about last year as we wrote in this piece last fall focused on Brent Musburger’s latest career move.

*A New York Times profile lands this week on minor-league baseball play-by-play grinder Donny Baarnes, an L.A. native who grew up studying Vin Scully (and telling us about that back in 2011) and perhaps it will pay off someday with a big-league gig.

*Due for an October release: Marcellus Wiley’s first book, “Never Shut Up: The Life, Opinions, and Unexpected Adventures of an NFL Outlier”(Dutton Books, 320 pages, $28). Nice to see. We’ve pitched Wiley an idea of doing a book for many years — happy to see one progressing on someone with such a diverse and compelling background.

*San Diego’s Mighty 1090 adds the Rams’ games as more subtext to the Charger-less city. While the L.A. Chargers’ games can likely be picked up in San Diego on the powerful KFI 640 AM signal, the city still has KGB-FM (101.5) and KLSD-AM (1360) as a local affiliate.

*A Washington Post story of Washington Nationals’ radio man Dave Jageler whose streak of more than 2,000 broadcasts ended recently — because of his son’s high school graduation.

*Allie LaForce leaves CBS, Jamie Erdahl enters. How transformative a moment this will be.

*Speaking about books in October: Because he believes he’s now part of sports media, we should also mention this Kobe Bryant authorized piece of journalism: “The Mamba Mentality: How I Play” (MCD, 208 pages, $35). Few pages and more money than Marcellus’ book, but the Andy Bernstein photos should make this worthwhile.

*Apparently, all Doris Burke had to do was mention in a New York Times profile that her contract was up soon, and ESPN decided to quickly rectify that.

*Finally: Should one need to hear Jim Gray explain how he got into the International Boxing Hall of Fame, leading into the induction this weekend, we haphazardly oblige.