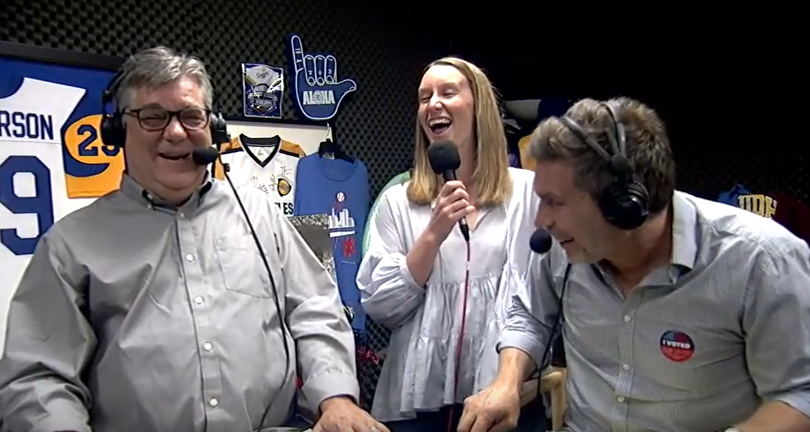 After a brief absence, our probation officers have agreed it would be more productive to plug The Drill back in. Cordless has never been out style.
So from this latest 40-minute plus effort with Tom, Steve, Jon, Eric and Nicole joining the fray

Here are some reference points:
* “NFL owners, team presidents and chief executives react to President Trump’s comments,” is a Sept., 2017 piece in the Washington Post that reveals NFL owners who donated to Trump’s campaign, including the Rams’ Stan Kroenke.
* “Spanos issues reply after Trump rips NFL players, sport,” is from the San Diego Union-Tribune, also in Sept., 2017, about Dean Spanos’ displeasure with the Trump tweet and standing up for his players.
* A nifty piece by Drew Magary for GQ on this topic:

* Fox News decides to issue an apology after implying Philadelphia Eagles players were kneeling during the National Anthem.
*The Trump-NFL-Eagles narrative brings this illustration from Jim Thompson: 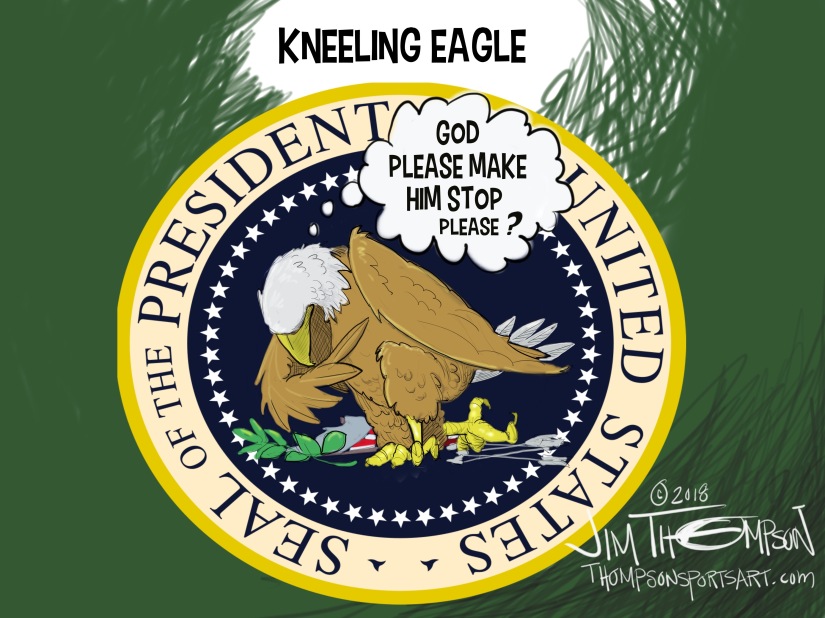 *The Wall Street Journal’s piece: “Gambling Is Coming, So Get Ready to Hate Sports” which includes:
“Gambling is what economists call an ‘inferior good’ — demand is higher among those at the lower end of the income scale. As economist Sam Papenfuss argued in a 1998 paper, state-sponsored gambling became popular as a way for high-income taxpayers to recoup some of the money spent on programs for the poor … Even if you believe the sports leagues can adequately police cheaters — and with modern data and techniques they probably can — gambling inevitably now becomes the tail that wags the dog.”
* From AwfulAnnouncing.com: “ESPN, FS1, and NBCSN are all reportedly looking into gambling-related shows to debut this year” back in March. And ESPN+ already has one with the witty title: “I’ll Take That Bet” with former Dodgers catcher Paul LoDuca.
* “Sports Gambling 101: What might our future of legalized betting look like” from the San Jose Mercury-News from May 21 opens with the paragraph: “First, it was legalized weed, now it’s sports gambling. What’s next, prostitution?”
*OK, one last “Back To The Future” jouney to the Biff Tannen Museum to find out whatever happened to Cal State Fullerton baseball fan Thomas Wilson: