Ahead of Jim Rome? Ehhhh https://t.co/2HYbdEnXqz

Jim Rome bravely broke the news to his TV viewers and radio listeners about 20 minutes into Monday’s episode.

At this point, the lead is all but buried, but you can see where this is going. 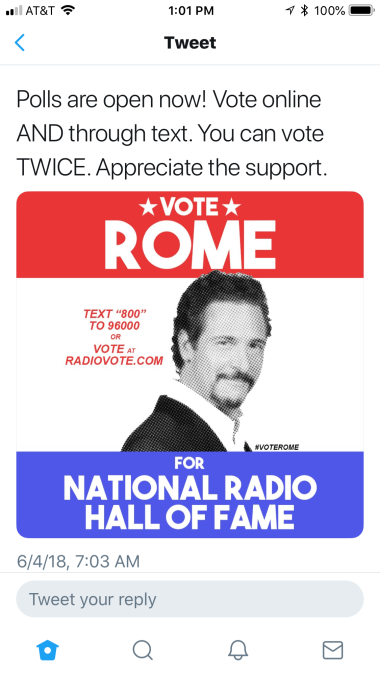 “So right now, today, together, we take a dignified loss. And we do so together. It did not happen, clones. We fought hard. We gave it everything we had. There simply is nothing to be ashamed of, nothing to not hold up your head about. I saw the effort put forth. I saw how much you all wanted it for me and the program. You could not have done any more.”

Apparently, they could have, but …

Instead, in the awkwardly named category of  Spoken Word Format On-Air Personality,” Westwood One syndicated conservative talker Mark Levine came out as the winner. Joe Madison of SiriusXM and George Norry of Coast to Coast AM were also runners up.

A better Tom Petty reference at this point should be: Don’t do me like that.

A story on this National Radio Hall of Fame website notes that a “record-breaking half million-plus votes” were cast in the two public-elected categories. In another story, it notes there was “huge public campaign that Levin ran and his supporters in conservative circles.”

We gotta be amplified on this one: Rome was in the wrong category at the wrong time.

In the same announcement Monday, an “industry panel” voted in for Hall worthiness the team of Mike Golic and Mike Greenberg, aka “Mike & Mike” from ESPN radio, a show no longer running, under the category of “Active Network/Syndication, 10-plus Years.”

Plus, for their worthy contributions to the business of radio, Nanci Donnellan, aka “The Fabulous Sports Babe,” and Mike Francesa, the longtime voice at WFAN in New York, were honored.

Bottom line is we’re not sure what the Radio Hall of Fame actually does, except what a lot of organizations do: Start a Hall of Fame, have a ceremony, sell tickets, and tries to keep moving forward, making the platform relevant in a society that may not even know what it does, or did, or could to in the future.

Vin Scully, added to the Baseball Hall of Fame broadcaster’s wing in 1982, had to wait until 1995 for an induction, the same year as Red Barber and Jack Buck. The first year of voting people in came in 1988, with people like Bill Stern, Edward R. Murrow, Fred Allen, Alan Freed, William S. Paley and Guglielmo Marconi (he invented radio) inducted first.

Rome, for those who need some history, started off making noise as the weekend host for San Diego/Tijuana-based XTRA-AM (690) in the early 1990s. Sports Illustrated’s Austin Murphy did a large take-out story on him in 1996:  “Whereas Upton Sinclair, author of The Jungle, belonged to the school of social realism, Rome, king of the Jungle, is a practitioner of social Darwinism. “Have a take, and don’t suck” is the credo he preaches to potential callers. Those who stutter, utter inanities or lose their train of thought suffer the fate of Tim from Anaheim, who molders on hold for two hours and 40 minutes, then speaks for 12 seconds before Rome presses a button that sends him plunging through an imaginary trapdoor. The Jungle goes wild.”

Next time, consider putting Rome in a category more befitting a national sports show. If he was in that came grouping that was eventually won by “Mike & Mike,” there would have been no need for a curious public vote and, as a result, taking a few minutes of one’s show to explain why he wasn’t worthy.

*The news today about Disney getting the Justice Department approval to buy up the 21st Century Fox assets for about $71 billion comes with one large contingency — all those Fox Sports Regional Networks, such as FSWest and Prime Ticket, have to be sold to someone else.
Anti-trust chief Makan Delrahim and other DOJ officials argued that is Disney added the 22 FSNs to its ESPN property, it would create a conflicts for the 61 million subscribers. Just consider the case of a weeknight MLB game that ESPN picks up, but also doesn’t black it out in the local market. Viewers could tune into either one, but Disney would be making all commercial income off them.
Last week, Disney raised its bid because Comcast came in with an all-cash $65 billion offer. Some say Comcast is still in the game and will come up with another offer — or at least buy out those FSN regionals.
As the Chicago Tribune’s Phil Rosenthal puts it: “While it is unclear who will end up with the 21st Century Fox assets that are on the block — Comcast is said to be weighing its next move now that Disney has improved its offer — there is at least one thing on which all three media giants seem to agree. None seems gung-ho about owning the Fox regional sports networks.”

*A critical update to our Jan, 2018 piece on tennis analyst Doug Adler’s legal situation involving his termination from ESPN: Los Angeles Superior Court Judge Elizabeth Feffer denied an ESPN motion to dismiss a wrongful termination and emotional distress case against them and a trial is now set for Oct. 15.
Expect an out-of-court settlement any time now and Adler to finally get some justice. Maybe not in the court of public opinion, which is still skewed against him based on an uninformed tweet launched by a New York Times tennis scribe.

* Tennis Channel debuts a two-hour documentary Sunday at 5 p.m. and 8 p.m. called “Strokes of Genius” that highlights the Roger Federer-Rafa Nadal rivalry that is framed through the 10th anniversary of their greatest matchup in the 2008 Wimbledon final. The show will be followed with a one-hour round-table discussion called “What Makes Genius: The Federer/Nadal Rivalry” hosted by Ted Robinson with Jon Werthheim and Tim Henman. The doc will also be available on iTunes after the airing. It has various replays between Sunday and July 15. ESPN has coverage of Wimbledon starting Monday at 4 a.m.

Welcome to the team, @DaleJr!

* NBC gets back into the NASCAR game with its second half of the season pickup — and introducing Dale Earnhardt Jr. as part of the broadcast team. It takes the Overton’s 400 at Chicagoland Speedway on Sunday at 11:30 a.m. on NBCSN.
After Fox opened the season, NBC has the final 20 races of the series, including the playoffs.
“I think he’d be an excellent broadcaster,” NBC executive Sam Flood said during a call with media members last summer. “He’s a talented guy and I think he’d be quite an addition to any broadcast because he’s curious, asks good questions and cares deeply about the sport. That’s the hallmark of our group. These people care deeply about the sport of NASCAR and the growth of NASCAR. … Junior’s got a bright future, it’s up to him where he wants to do it and what the opportunity might be for him.”
Rick Allen is the NBC lead broadcaster with Jeff Burton and Steve Letarte in the booth joining Earnhardt Jr. Marty Snider, Kelli Stavast and Dave Burns are in the pits. The pre-race show is hosted by Krista Voda with Kyle Petty and Dale Jarrett.

* The Dodgers’ home game against Colorado on Saturday (Channel 11, 4:15 p.m.) lands a second week of Fox regional coverage. Kevin Burkhardt and Eric Karros are on the call, with Jon Paul Morosi as the reporter. Joe Davis, the Dodgers’ main TV play-by-play man, will be instead dispatched to Yankee Stadium to do the Boston-N.Y. Yankee game with Tom Verducci and Ken Rosenthal.
No Joe Buck or the always enlightening John Smoltz? Both will be involved in Fox’s coverage of the U.S. Senior Open golf tournament in Colorado Springs, Colo. Buck will return to the 18th tower with Paul Azinger and Brad Faxon for Saturday and Sunday coverage (1-6 p.m., FS1), with Shane Bacon in for Buck during the first two rounds Thursday and Friday (1-6 p.m., FS1). On course is Curtis Strange, Ken Brown and Brett Quigley.
Smoltz, meanwhile, is actually playing in the event.

* ESPN has the Red Sox-Yankees game on its Sunday Night Baseball schedule this Sunday (5 p.m.), touting it as the first time analyst Alex Rodriguez will call his first game involving the teams (with Matt Vasgersian and Jessica Mendoza). It perhaps should also be noted that first-year Yankees manager Aaron Boone and Red Sox manager Alex Cora both served as baseball analysts for several years at ESPN.

12% of FOX/FS1 World Cup homes earn over $200k per year, which is nearly double the % of homes at that level nationally.

Median income of homes watching the World Cup on FOX/FS1 thus far has been a very impressive $85,200.

To put that in some context, census bureau reported the median HH income of the US at $59k last Sept.

Sorry @sportnetla graphics guy but this still cracks me up. This should be his/her walk-off graphic. And not on the next resume. pic.twitter.com/CPbo5QV4pc

Included in the @CJR edition of The Lower Case (headlines that somehow got out there past editors): https://t.co/vODp8V6jzF pic.twitter.com/txotZza8QN

Heard @Theoldp w/ Travis this AM, and Travis was asking for advice about how to go forward with some "nipple" surgery? He believes his chest is embarrassing w no shirt on. At least one photo exists on the Internet machine. Petros advised him to just do it and take ownership. https://t.co/VF4WZXlw0e

Bill Russell forgot he was on live TV 😂 pic.twitter.com/O49DJbkkdQ

“Thanks to Paulina Chavira, an editor at The New York Times en Español, the Mexican national team’s jerseys are finally correct.” https://t.co/3a212e0kGT

I like that Fox just did that Russia map graphic. Should do this more often. Give us fans a sense of where these matches are taking place relative to Moscow (Yes, I'm too lazy to Google Map Russia)