Fifty years later, the Miracle Mets may be more in demand than ever before for franchise die-hards looking for something to latch onto. (As a treat, watch the entire decisive Game 5 of the 1969 World Series on NBC with Curt Gowdy on the call, and Sandy Koufax and Mickey Mantle in the studio with weird red blazers).
Honestly, we have little patience for all this. It’s a great milestone of sorts, a seared memory for many whose fancy was captured eight years after the team was launched as a group of misfits under Casey Stengel.
We don’t need a lot of rehashed history if you’re a Southern California baseball fan. But we let you know these exist just the same.

We are into reunions. In 2009, they had a 40-year anniversary: Yogi Berra, Nolan Ryan, Jerry Grote, Tom Seaver, Jerry Koosman and Duffy Dyer made it. This time it’s going to be much more difficult.
As Patrick J. Sauer writes in a New York magazine review of all the books churned out this time of year on this anniversary – and Sauer wasn’t even alive then — “the ’69 Mets still have a psychic hold on a substantial chunk of the fan base — even those, like myself, who only know the legend of Tommie Agee through fuzzy television clips and the barstool-chatterbox oral histories passed down from the rickety cheap seats of Shea Stadium. … But ’69, man: That team is frozen in time, encased in the bedrock on which this baseball-mad city was built. I knew the broad strokes, but I wanted a crash course in the day-to-day and the aftermath, then and now, and the looming anniversary gave me hundreds of pages’ worth. What I came to understand is that, while the outcome of the ’69 Series never changes, the lives of the players and those who follow them do. Records are broken, memories fade, players get older and then they die; their blunders and triumphs live on only in books.”
So now, the Mets, with all their blue-and-orange glory,  are a thing again. We’ve decided to recap all this revisionist history in one fell swoop of a Swoboda-looking dive:

The book: “They Said It Couldn’t Be Done: The ’69 Mets, New York City, and the Most Astounding Season in Baseball History”
The author: Wayne Coffey
The publishing info: Crown Archetype Publishing, $28, 304 pages, released March 26
The quick review: Coffey, a former writer for the New York Daily News and author of 30-some books, will please those who lived through the experience as he did when he was 15 and even recalls running onto the field after the Game 5 win and tearing up a piece of Shea Stadium sod. Coffey isn’t keen on the use of “miracle” to describe the feat, and devotes a chapter to it (note, it’s not in the book title) since manager Gil Hodges had quite a nice, young talented team that played to their abilities. Among Coffey’s interviews are tracking own otherwise obscure rookie outfielder Rod Gaspar, the former Lakewood High, Long Beach City College and Long Beach State standout, now 73 and living in Mission Viejo. Gaspar scored the game-winning run in Game 4, as a pinch-runner for Jerry Grote. 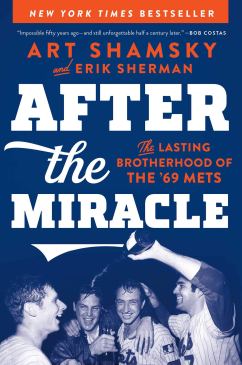 The book: “After the Miracle: The Lasting Brotherhood of the ’69 Mets”
The author: Art Shamsky with Erik Sherman
The publishing info: Simon & Schuster, $28, 336 pages, released March 19
The quick review: The Mets starting right fielder relies on his friendship of teammates such as Tom Seaver, Jerry Koosman, Bud Harrelson and Ron Swoboda (see below) to rehash it all with help of writer Sherman (“Davey Johnson: My Wild Ride in Baseball and Beyond” and “Out At Home (with Glenn Burke)”) Harrelson is suffering from Alzheimers and Seaver battles with Lyme Disease and isn’t making any public appearances any longer. So the group of them go to see Seaver at his Napa Valley vineyard and trade stories. 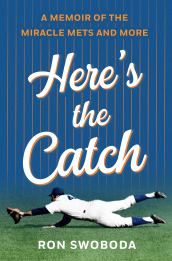 The book: “Here’s the Catch: A Memoir of the Miracle Mets and More”
The author: Ron Swoboda
The publishing info: Thomas Dunne Books, $27.99, 240 pages, to be released June 11
The quick review: Remembered for his Game 4 ninth-inning catch in right field that robbed Brooks Robinson of a hit — it was still a sacrifice fly that scored Frank Robinson and tied the game at 1-1 despite selective memory – Swoboda also got a two-out single in the bottom of the ninth that could have rallied the Mets to a win but Art Shamsky (see above), grounded out. Now he can tell you all about it. Again.

The book: “The Miracle of 1969: How the New York Mets Went from Lovable Losers to World Series Champions”
The author: Coutinho Rich
The info: Sports Publishing, $24.99, 240 pages, due for release June 25
The quick review: Rich, who wrote the 2017 book, “Press Box Revolution: How Sports Reporting Has Changed over the Past Thirty Years,” seems to be the prisoner of a marketing campaign that wants this piece of work to go with the pronouncement: With a country in turmoil, Americans rally around a ball club for hope of a miracle. Coutinho watched the ’69 Mets as a 9-year-old, then later covered the team. A lot of man-on-the-moon, Woodstock, the Beatles breakup and Vietnam War references to try to frame it.