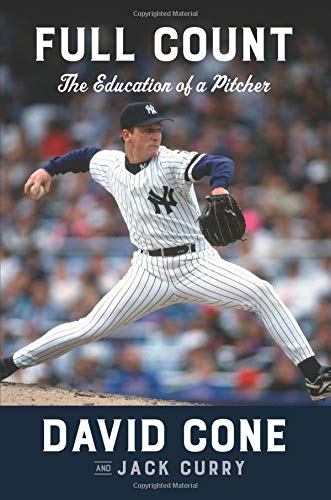 “Full Count: The Education of a Pitcher”

The publishing info:
Grand Central Publishing (part of the Hachette Book Group), $28, 400 pages, due out May 14

The links:
At the publisher’s website, at Amazon.com, at BarnesAndNoble.com (signed copies available), at Powells.com

The original thought was to make this as a combo-item with “108 Stiches” by Ron Darling  – both were Mets teammates for a time in the late ’80s and both are now New York-local team broadcasters.
Cone even writes about a time in ’87 when he just came up with the Mets, and Darling took him to a men’s clothing store to teach him how to dress — blue blazer, find some slacks to match.
“That was a big deal,” Cone writes on page 116, ” and I appreciated how Darling guided me and taught me how to be a professional.”
But there were some things Darling couldn’t stop from happening in ’88.
The deeper we went into this Cone tome, it was worth extracting the time when Cone decided to reveal himself to the world. Knowing his impact on the outcome of the ’88 NLCS against the Dodgers, we didn’t want to just gloss over his part in L.A.-sports history for those who may not remember.
He gets right to it in Chapter 2, “When The Going Gets Tough.”

“Once upon a time, I wanted to be a sportswriter, believing I could have been like Oscar Madison, the funny and sloppy writer from ‘The Odd Couple’. So when the New York Daily News asked me to ghostwrite a column with Bob Klapish, their beat writer, for the National League Championship Series, I agreed, even though it was a distraction I didn’t need before the most important start of my career.”

Cone looks much like a Felix Unger, but we digress …

Long story only slightly short: Cone decided that the Mets’ 3-2 win in Game 1 over the Dodgers was “lucky” for Orel Hershiser to go eight scoreless innings, reliever Jay Howell reminded him of “a high school pitcher” because he threw so many curveballs” and …
Enough said.

“In the giddiness of our clubhouse, I lost focus on what mattered – my subsequent start – and in trying to be sarcastic and facetious, I put myself in an unenviable position.”

He put himself on the bulletin board of the Dodgers clubhouse before his Game 2 start.
“Really, it was what I had written,” Cone accepts. “The veneer of toughness I thought I possessed began to dissipate as I learned just how massive a story I had foolishly created.”
And this was long before the Internet and social media would have blown it up and perhaps even cycled through some of the reaction before Game 2 started. Also a time when the Daily News of New York meant something to people.
It was a time when Shirley Povich was still at the Washington Post, and he called the “David Cone affair … and the perils of a ghostwriting profession … the subject of the text by this old ghostwriter himself.”

Cone then explains how he fell apart on the mound with the Dodgers’ dugout screaming at him and 53,000 in Dodger Stadium. Cone even finds what Tim McCarver said about him on the national TV broadcast: “David Cone has nobody to blame but himself. Don’t be a sportswriter.”
Now he tells us, and everyone.
Cone gave up five runs in a 6-3 loss, leaving him “stunned and discombobulated.” But he followed it with a complete-game, 5-1 win in Game 6. The Mets lost to the Dodgers in Game 7.

“My humiliating experience in Game 2 was the worst of my career, a collision of my valuable pitching career and my unimportant and brief journalism career. I wish it hadn’t happened … because we lost the series in seven games. My meltdown and my lack of toughness might have, in part, prevented us from winning a World Series title.”

On Oct. 7 of ’88, Cone issued a statement (not included in the book, but printed in the New York Times and extracted from The Daily News) that read:
”This is my first – and I’m announcing today – my last attempt at tabloid journalism. I apologize to my family for embarrassing them. And I apologize to my teammates.”
More fallout came via the L.A. Times coverage.

He writes now that he learned from that and he “never felt unnerved again,” including a perfect game he threw for the Yankees against the Expos in July, 1999, which he gives glorious space to in Chapter 16.
If this is a book to expand about teachable moments and responding to adversity (even if you created it), then perhaps there’s merit in Cone finally getting this all out. If having him relive it all in his own book brings more joy to a Dodgers fan, consider it done.

Cone has plenty other first-hand colorful remembrances and things that are worthy of note especially for up-and-coming athletes. Like when Kansas City teammate Mark Gubicza didn’t realize he was tipping his slider by sticking his tongue out, and it took Bob Melvin getting traded from the Orioles to the Royals for him to let Gubicza know about it.

Cone also admits that during a trip to L.A. after that ’88 playoffs, when a group of U.S. players were going to Japan, Roger Craig taught him the split-finger fastball.
This was also months after Cone had another memorial Dodger Stadium visit, in May of ’88, when a curveball he threw to the Dodgers’ Pedro Guerrero ignited some bench-clearing square dancing.
Maybe Cone doesn’t necessarily set up the story properly in the book considering how the entire at-bat went but… here’s the video:

Now here’s Cone’s account:
“Guerrero shed his helmet like a boxer taking off his robe and barreled toward the mound, but I didn’t budge from my spot and kept telling him it was a curveball. After about three strides, Guerrero stopped and turned his body back toward the plate, almost waiting for (Mets catcher Barry) Lyons to intercede. I thought the entire incident was a power play by Guerrero, a flashy show to try to get some kind of reaction … Still, that didn’t give Guerrero the license to whip a hunk of wood at me. He was ejected and was later suspended for four games. I pitched six solid innings and we won the game. .. I stood up to Guerrero, a muscular player who might have snapped me like a toothpick. But I was just pitching him tough. I didn’t do anything wrong. … Many of the tests with the Mets were a simple question of ‘Were you tough enough?’ On that day, I was.”

A few months later, not so much.

1-Assisted.
Funny that this was a chance for Cone to really become a journalist again, but he needed the help of Curry, a former national baseball correspondent the New York Times who now does studio work on the Yankees’ pre and post-game shows for the YES Network, to join his TV cohort in making this book happen. Cone, a five-time All Star from 1986 through 2003, on five World Series teams, is one of those Hershiser types who got the most of his body’s ability as a pitcher at the highest level and was swell enough to have a lot of moments that he can now talk about on his game coverage, both on YES Network and now on TBS. The insights are worthy of practical application.