“The Incredible Women of the All-American
Girls Professional Baseball League” 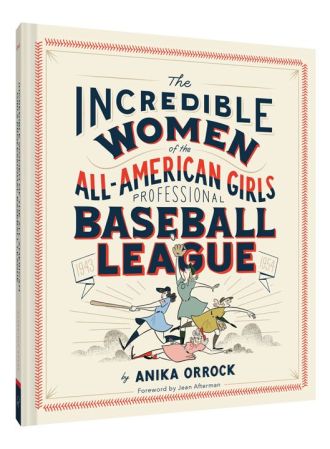 The links:
At the publisher’s website
At Amazon.com
At BarnesAndNoble.com
At Powells.com
At Indiebound.opg
A the author’s website

I asked my soon-to-be 80-year-old mom recently: So what do you remember about watching All-American Girls Professional Baseball League games when you were growing up in South Bend, Ind., back in the 1940s?

Didn’t you say you have a photo of yourself with a player named Lou Arnold?

She did. It’s still framed. Here it is:

Arnold attended to a league tryout in ’48 with no baseball position. The league was desperate for overhand pitchers – when it started five years earlier, it was a fast-pitched underarmed style. It moved to sidearm in ’47 and finally evolved to overhand. Arnold she seemed like a good pitching prospect based on her high school athletic ability.

So while Arnold was there for ’48 and ’49, she did quit in 1950 for “undisclosed reasons,” according to the bio. She came back in ’51 (a 10-2 record, a no-hitter and 32 straight scoreless innings and nine complete games). Then she quit after ’52, deciding to live in South Bend the rest of her life working on brake lines at the Bendix Corporation.

My mom has photos and autographs inside a leather-bound small scrapbook that Arnold once gave her. It’s all still preserved in pristine condition. We can still make out the inscription: “To My Friend Theresa, Lou Arnold, 1949.”

More team photos and individual shots of the players are now all over mom’s coffee table. She’s holding them up with a magnifying glass, studying it all again.

On page 47 of “The Incredible Women of the All-American Girls Baseball League,” a quote from Arnold appears:

“Wonderful umpire, Barney Ross … but I was pitching to this girl who wasn’t the best hitter and he called a strike a ball. Of course my catcher was yelling at him and I said, ‘Barney, I want to tell you something,’ and he said, ‘Yes, Lou?’ And I said, ‘You are going blind!’ He said, ‘Lou, I want to tell you something. You go back to that mound and I’ll show you how blind I’m getting.’”

The quote is accompanied by an illustration of a woman in a catcher’s mask going face-to-face with a home plate umpire with his mask on.

That’s all due to our new favorite artist — Orrock, an Oakland native now in Nashville who characterizes herself as an illustrator above all – writer, designer, cartoonist, humorist and baseball devotee. But with all her talents, she figures out a way to piece together vignettes about the league with style and grace to reflect the sense of importance, excitement, competition and fun that was going on by those who were there.

Nothing gets skirted here. 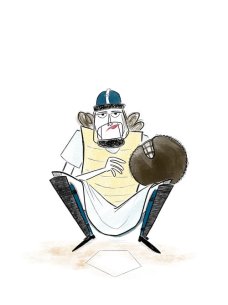 It’s been almost 30 years after the release of the movie “A League Of Their Own” — Geena Davis as Dottie Hinson, Lori Petty as her sister Kit, Madonna as “All The Way” Mae Mordabito, Rosie O’Donnell as Doris Murphy and Tom Hanks as manager Jimmy Dugan playing for the Rockford Peaches. The characters were amalgamations of actual AAGBL players, who competed as well for the Racine Belles, Kenosha Comets and South Bend Blue Sox.

Many, like my mom, have enjoyed the movie, as well as academic books done about the AAGBL.

But considering how many of this generation and more may have never seen the movie and still have little to no knowledge about how this league came into being, or why it was so special, this may be the treat they didn’t know they’ve been been waiting for. And let’s pin this all to Women’s History Month while we’re at it.

What makes this history come alive is Orrock’s mid-century retro drawings and colors, like what you would see in New Yorker magazine. Not so much cartoonish as they are whimsical, determined and almost as a way to mock the Ad Men of the day who depicted women in this way washing dishes or making martinis for their husbands when they came home.

This has energy, sophistication and validation for these working girls, athletes who wanted to fill in the gap during World War II and the Korean Conflict, when many of the Major League Players were away and that league was filling up with fill-ins.

Even if you know some of the stories about what happened between 1943 and ’54, in an academic sort of way, this way of storytelling by Orrock rocks it with an ability to cultivate quips and incidents from the players and recreate how that may have looked in elegant graphic detail.

And if you need more affirmation that she’s drawing upon her hopeful outcome to our current situation:

Still there are birds and fragrant blossoms, new grass and friendly little buds of color peeking out to say ‘hi!’. So the overwhelming joy it brings is delayed a while. It’s still the first day of spring and I’m not giving up that easy, so there. Catch, anyone?#springhassprung pic.twitter.com/11KWvvxL46

There will be crying in baseball, when you read this.

Tears of joy. Of memories. Of wishing we could have seen this for what it was at an important time in American history.

We can flash back to the reunion at the Cooperstown Hall of Fame during the closing credits of “League of Their Own,” when some of the real women from this league are  playing baseball at the old ballpark.

If you’re lucky enough to have a mom who can do that, still.

Other reviews of note

Friends in Los Angeles, if you’re within range of a TV today(duuuuh), time in to @CBSLA ! Thank you so much @SportsCentralLA and @LisaHillaryTV !! @AAGPBL https://t.co/j9Rikm1nhy

It’s also kind of cool to see how Orrock did spend some time in L.A. during her career recently.

And on her website, Orrock has a special package deal of a signed book and other cool stuff that’s worth considering. Like, if your mom is into this kind of stuff …

One of the other players my mom dearly recalls on that South Bend team was Jean Faut, one of the best players in league history, and the subject of a 2014 Sports Illustrated feature. The autographed photo my mom still has is above.

Faut just turned 95 and is living in South Carolina. The goal is to have my mom and her connect via email — Jean’s almost completely deaf at this point — and see what kind of things they can remember after all these years.

== One of the things my mom also pulled out from her files was a book I gave her in 1993: “Women at Play: The Story of Women in Baseball,” by Barbara Gregorich and easy to find in a search at AbeBooks.com. Still a neat read.
She also has “When Women Played Hardball,” by Susan E. Johnson from 1994.

== Kat D. Williams, a professor of American history at Marshall University and board president of the International Women’s Baseball Center, authored “The All-American Girls after the AAGPBL: How Playing Pro Ball Shaped Their Lives” in March, 2017, which we regret not finding to include in our review series that year.
Williams has a new book coming out in May called “Isabel ‘Lefty’ Alvarez: The Improbable Life of a Cuban American Baseball Star” from the prolific University of Nebraska Press that we are apt to include in our reviews this spring as we continue forward.

== In April 2013, there was “We Were the All-American Girls: Interviews with Players of the AAGPBL, 1943-1954,” by Jim Sergeant, which appear to have helped Orrock cull material for her book based on his interviews.

== In 2006: “The Origins And History of the All-American Girls Professional Baseball League” by Merrie A. Fidler

== From the YA shelves: “A Whole New Ball Game: The Story of the All-American Girls Professional Baseball League,” with a cool cover, by Sue Macy.

== More recommended reading about women and baseball: “Curveball: The Remarkable Story of Toni Stone the First Woman to Play Professional Baseball in the Negro League” from 2010; “Bloomer Girls: Women Baseball Pioneers (Sport and Society),” by Debra A. Shattuck in 2017, “No Girls in the Clubhouse: The Exclusion of Women from Baseball,” in 2009 by Marilyn Cohen; and in 2006, “The Encyclopedia of Women and Baseball,” edited by Leslie A. Heaphy, Mel Anthony May and Laura Wulf.

== In honor of Women’s History Month, the Baseball Hall of Fame has this piece about the time the Silver Bullets came into Cooperstown.

The mother of invention: The PBBClub.com 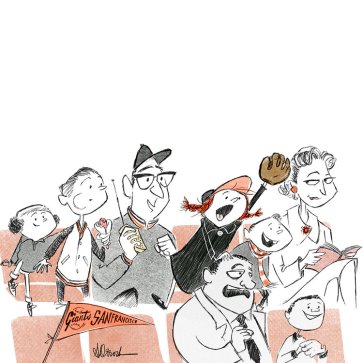 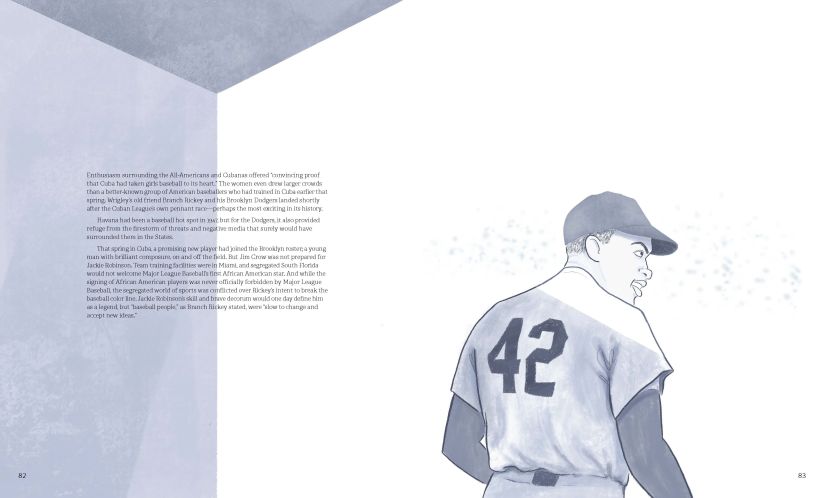 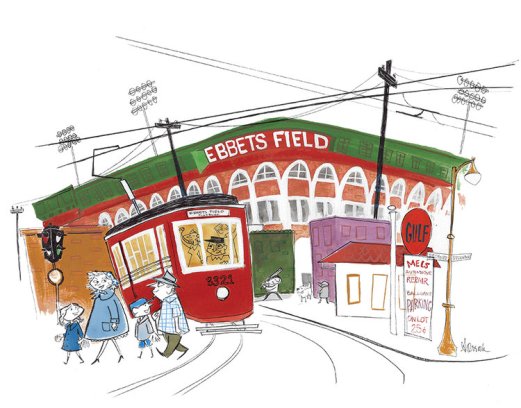 2 thoughts on “Day 2 of (at least) 30 baseball book reviews for spring/summer 2020: The girls still got game, or do we need to draw you a picture?”