“Yogi: A Life Behind the Mask”

The links:
At the publisher’s website
At Amazon.com
A BarnesAndNoble.com
At Powells.com
At Indiebound.org
At the author’s website

Another Berra book is like … what’s the phrase … déjà vu all over again.

And we’re not even covering the plate of all the self-help/humor books you’ll come across when just googling this simple title. 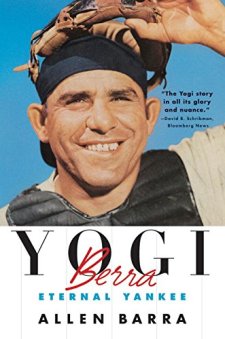 It feels as if we just put down “Yogi Berra: Eternal Yankee” in March, 2009, Allen Barra’s 480-page piece de resistance that publisher W.W. Norton & Company called “a gripping biography.” It was difficult to forget, based on the weight and achievement of that project. Barra said his goal was to create the first comprehensive work about Berra, the “greatest ballplayer never to have a serious biography.”

(And, for what it’s worth, Berra is metaphorically lifting his mask off his face here).

And now comes this from Pessah, whose 2015 book, “The Game: Inside the Secret World of Major League Baseball’s Power Brokers” did extremely well peeling back the business of the game. That took him  five years of research and more than 150 interviews, an achievement well worth the talents of one of the founding editors of ESPN the Magazine who was nominated for a Pulitzer Prize for editing and writing an examination into the role of racism in Major League Baseball.

We’re not against marketing, but it may seem odd that these publishers have decided to call Pessah’s work “the definitive biography” and a “transformational portrait.” The same publishing house already produced “My Dad, Yogi,” by Dale Berra in 2019, and “When You Come to a Fork in the Road, Take It!” in 2002, so it has a history in this Berra business.

In channeling his version of  “Yogi,” Pessah goes 100 pages better than Barra, explaining how it took him four years and more than 150 interviews. In noting his sources, Barra’s “Eternal Yankee” is cited. But interestingly, no interview with Yogi’s son, Dale. Seems obvious, but then again …

You can observe a lot by watching how many authors try to capture Yogi Berra in a cover-to-cover, over-the-counter contemporary narrative.

Berra’s own publishing journey, for what it’s worth, included two self-penned efforts. The first, in 1961 as he was contemplating the end of his career, has the odd title: “The Autobiography of a Professional Baseball Player.” (Wait’ll Jim Bouton turns that upside down). And then in 1986, as a Yankees coach, came “Yogi: It Ain’t Over …” with Tom Horton. 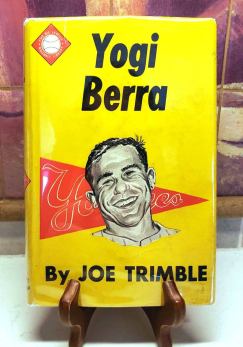 Before and after, there was “Ten Rings: My Championship Seasons” in 2003, “What Time Is It? You Mean Now?” in 2002, “The Yogi Book: I Really Didn’t Say Everything I Said” in 1999 and “You Can Observe a Lot by Watching: What I’ve Learned About Teamwork from the Yankees and Life” in 2008 with Dave Kaplan. There’s even the 1954 “Yogi Berra” by Joe Trimble that should be sought out in any used book store.

No doubt, Lawdie Berra – that was how his Italian mom pronounced his first name of Lawrence – deserves as much ink as he can generate. But how much more? Than Ruth and Gehrig combined it kind of seems.

(By our own research, Berra died at 90 in 2015, having lived the exact combined the ages of Lou Gehrig — 37 when he died in 1941 — and Babe Ruth — 53 when he died in 1948. How the three-time AL MVP and 13-time World Series champion was only a second-ballot Hall of Famer (with 85.6 percent) in 1972, behind Sandy Koufax, is beyond comprehension when you see Derek Jeter and Mariano Rivera going in as almost 100-percent first-timers. Look at 1971, when Berra was first eligible. He had the most votes – 242 – but it was only 67.2 percent, falling short of the 270 needed. No one was elected that year on a ballot that had 15 players eventually make the Hall of Fame. In the ’72 election, Duke Snider was in his third year of eligibility and still could only get 21.2 percent of the vote. Snider didn’t get into until the 11th year of eligibility. Sorry for the sidetrack, but … Is there a book in this?)

Lately, we’ve become more interested in finding more about Berra’s U.S. Navy tour, from ’43 to ’45, right after he just signed with the Yankees (and only because St. Louis Cardinals boss Branch Rickey didn’t think the local Dago Hill kid had enough to make it so he signed his pal, Joe Gargiola, instead.)

A Purple Heart recipient, second-class seaman Berra was part of the WWII attack at Normandy on D-Day as a gunner’s mate on the transport USS Bayfield, on a rocket boat firing machine guns and launching rockets at German soldiers on Omaha Beach and Utah Beach.

More of that. Less of the other. And you’ve got yourself a new engaged reader.

FWIW: We take pride in Q&As w/ some baseball authors this spring as their books come out. This is about as generic 5 Qs one can ask w/o appearing to have even read the book. And we read it. And this Q&A kinda reflects our review:https://t.co/kObOhvRWBO https://t.co/Eeheb1ydQU 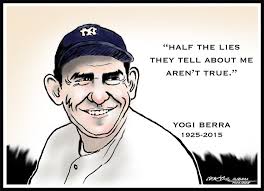 Let’s call this one fact-catcher’s interference.

We’re not completely sold on the title. This is really about unmasking the person and all he did without the mask on.

But then this is the same publishing house that is touting the new Ronan Farrow book entitled “Catch and Kill: Lies, Spies and Conspiracy to Protect Predators.”

And calling Berra the “most appealingly simple, innately complex, and universally admired men in all of America” feels like it’s trying to strip away a lot of the myth we kind of like to embrace about his being. We’re still fond of facts, obviously. Like when the Associated Press did the obit about him in 2015 and had to send out a correction because it initially mistakenly referred to him as “Yogi Bear.”

Those who collect Yankee history like a box of expensive cigars will likely hold this up to the light, enjoy a long drag, and reminisce. Nostalgia sells. Retro history has a section in the store. There’s value in that, we suppose.

We’ll just add it to the Berra book pile. 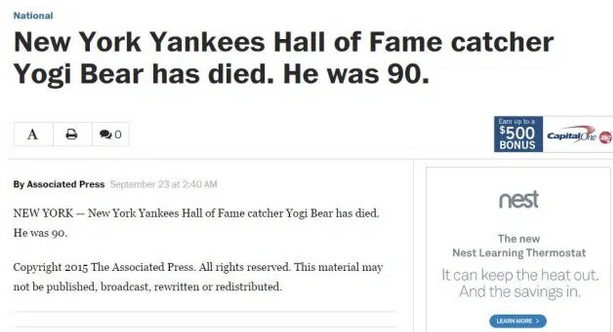 == The Baseball Hall of Fame in Cooperstown, N.Y., posted a story on a donation of a new Navy-time jersey worn by military baseball teams during World War II.

1 thought on “Day 12 of (at least) 30 baseball book reviews for spring/summer 2020: Unmasking more Yogi Berra? What will the market bear”