The Milwaukee Brewers at 50:
Celebrating a Half-Century of Brewers Baseball 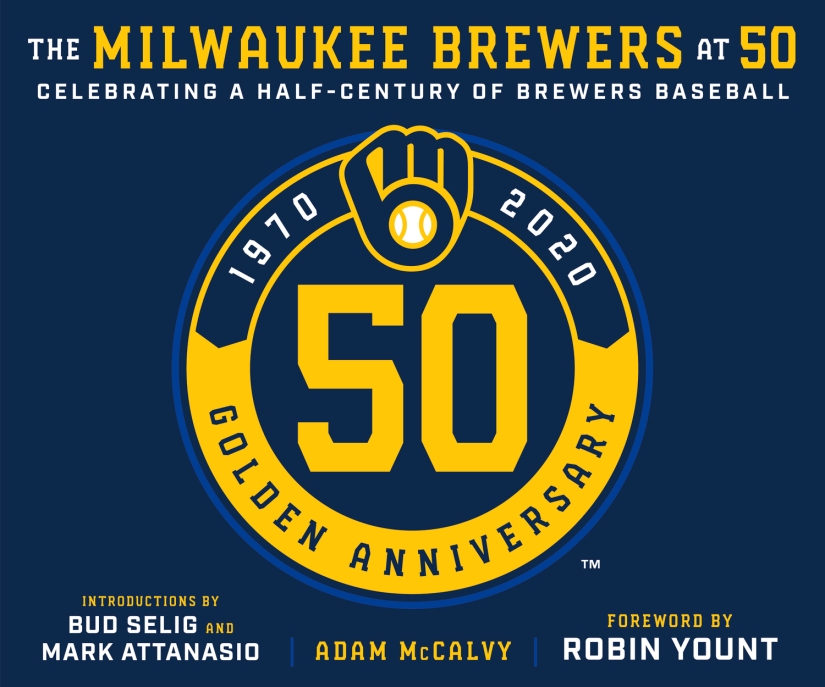 The author: Adam McCalvy; introduction by Bud Selig and Mark Attanasio, forward by Robin Yount
The publishing info: Triumph Books, $40, 256 pages, released May 19, 2020
The links: At the publisher’s website; at Amazon.com; at BarnesAndNoble.com; at Powells.com; at Indiebound.org

Turning 50:
The Brewers Celebrate a Half-Century in Milwaukee 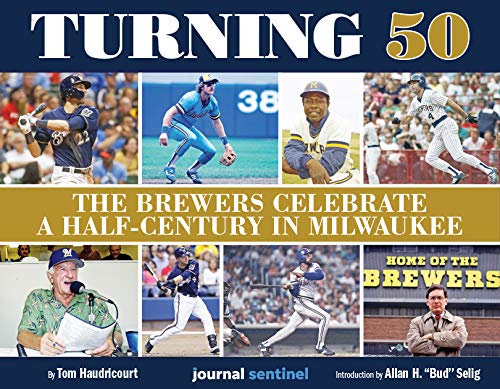 The author: Tom Haudricourt; introduction by Bud Selig
The publishing info: KCI Sports Publishing, $24, 136 pages, released May 15, 2020
The links: At the publisher’s website; at Amazon.com; at Powells.com; at Indiebound.org; at Bookshop.org

The reviews in 90 feet or less

How do you drink in the fact the Milwaukee Brewers have been a Major League Baseball team for 50 years? Even at the expense of the Seattle Pilots’ misfortunes? Or the Milwaukee Braves abandoning the city to move on up to Atlanta?

How about oversized books.

Some will take both. Others need to compare and contrast.

What they both have: A desire to celebrate the franchise decade by decade with a large splash. And a forward written by Bud Selig, the founding owner who ended up as the MLB commissioner by falling upward.

In “Brewers at 50,” Selig says he is “grateful to and appreciate the work that Adam McCalvy has done authoring this book. He has brought back memories for all of us in descrbing five wonderful decades of Brewers baseball. It has been a magnificent run.” 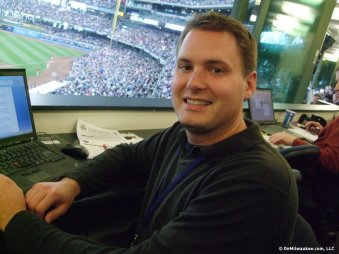 With McCalvy and “The Milwaukee Brewers at 50,” there’s a writer who has covered the team he grew up watching for MLB.com since 2001. And with Triumph Publishing in Chicago, you get the muscle of an established sports-book company that can put plenty of resources behind a project. It touts its “visually stunning retrospective” with images culled from the team archives and photos from MLB resources.

In “Turning 50,” Selig says it has “been a wonderful 50 years for the Brewers and I am grateful to the Milwaukee Journal Sentinel for its work and effort in bringing forth the history of our great franchise for baseball fans of our city and state with this commemorative book. I am especially grateful to the author, Tom Haudricourt, who has covered the Brewers … with a genuine love for the game.”

With Haudricourt and “Turning 50,” you get the Milwaukee Journal Sentinel’s  Brewers beat writer since 1985 (with a brief trip to cover the Yankees in New York in 2020) and a four-time Wisconsin Sportswriter of the Year by the National Sports Media Association. He has also written “Special Brew: An Inside Look at the 2018 Milwaukee Brewers,” (KCI Sports, $14.95, 19 pages, released in April, 2019) as well as “Brewers Essential” in 2008 and “100 Things Brewers Fans Should Know & Do Before They Die”  in 2018, updated from 2013

And with KCI Sports Publishing in Stevens Point, Wisconsin, you get a company around since 2004 that has fashioned itself on turning newspaper coverage of a team or sport or event into an “instant” book/keepsake that are far more impressive with their turn-around time. It exhausts the Milwaukee Journal Sentinel’s library of photos and has the disclaimer that it is in no way licensed by the Milwaukee Brewers or Major League Baseball.

In “Brewers at 50,” there’s a spread of Brewers in the Hall of Fame – although Robin Yount (and perhaps Paul Molitor) are the only “true” Brewers based on their careers. It is interesting to see how Hank Aaron, Rollie Fingers, Don Sutton, Trevor Hoffman, Ted Simmons are included, along with Selig, and then broadcaster Bob Uecker as a Frick Award winner.

And there’s a shot of Brandon Woodruff hitting a home run of Clayton Kershaw in Game 1 of the NLCS of 2018.

In “Turning 50,” there’s a shot of Craig Counsell as an 11 year old with the Brewers’ Rollie Fingers and Dion James displaying what looks like a Little League trophy from 1982. (The caption says this was taken in 1981 … OK … and was submitted by Counsell’s mother, Jan). Counsell, of course, ended up as the team’s manager since 2015. How cool is that?

Also in “Turning 50”: Take-out interviews with players during different decades (Ken Sanders, Jim Gantner, Jeff Cirillo, JJ Hardy and Ryan Braun) plus breakouts of the players who could be named to various “all-decade” teams.

It’s also a franchise that probably still should be returned to its American League roots instead of embedded in the NL Central (and then move the Houston Astros back to the National League where it started).

Whatever your leanings, it’s a place in time to honor its existence.

Thanks to all of you who have ordered "Turning 50: The Brewers Celebrate A Half-Century In Milwaukee." Still plenty of time to get your copy. pic.twitter.com/ChpOFThoGU

***** “Building the Brewers: Bud Selig and the Return of Major League Baseball to Milwaukee,” by Chris Zantow (McFarland, $29.95, 222 pages, released Oct. 30, ’19). From page 179 of the epilogue: “Through all the studies of baseball economics and the argument about whether Bud Selig was the greatest or worst baseball commissioner of all time, one fact remains — without Selig, there most likely would not be a major league team in Milwaukee. His tireless efforts in bringing the Brewers to Milwaukee may never be repeated anywhere in baseball” 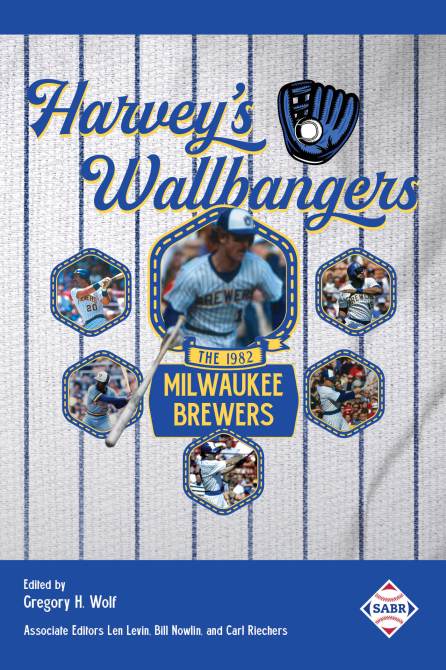 ***** “Harvey’s Wallbangers: The 1982 Milwaukee Brewers,” edited by Gregory H. Wolf, associate editors Len Levin, Bill Nowlin and Carl Riechers, SABR Baseball Library Books, $29.95, 404 pages, released May 21, ’20). In documenting that team that ended up winning the American League title (defeating the Angels in the ALCS), the SABR researchers have full bios on 33 roster players, plus the owner (Selig), GM (Harry Dalton), manager and coaches, a recap of seven important regular-season games (including Don Sutton’s shutout in his first AL win to keep the Brewers in the pennant chase), a recap of the ALCS and World Series and an interesting recap by the numbers — three players hit at least 30 HRs for the team that season, with Gorman Thomas, Ben Oglivie and Cecil Cooper doing it and Robin Yount coming up one short. For all that team had, it was missing the injured Rollie Fingers during the playoff run. Sutton also says in his bio: “Milwaukee was the greatest place I ever played. It’s a blue-colar lifestyle and work ethic that is very simple. There’s no pretentiousness.” Sutton went 22-25 during two-plus seasons there, then went to Oakland and the Angels, then an odd return to the Dodgers at the start of their 1988 World Series campaign.

*“Big League Again: The 1970 Milwaukee Brewers,” by David Ellmann (self published, $24.99, 318 pages, released April 23; it also appears to have been dictated into a software system that couldn’t distinguish well between many words and bad edits remained)

*“Home of the Braves: The Battle for Baseball in Milwaukee,” by Patrick Steele (University of Wisconsin Press, $26.95, 272 pages, released March, 2018) gives more history of the Milwaukee Braves after the franchise moved there from Boston in 1953 and then left to Atlanta.