The book: “A Season in the Sun: The Rise of Mickey Mantle”
The authors: Randy Roberts and Johnny Smith
How to find it: Basic Books, 304 pages, $28, released March 27.
The links: At Amazon.com, at the publishers’ website. 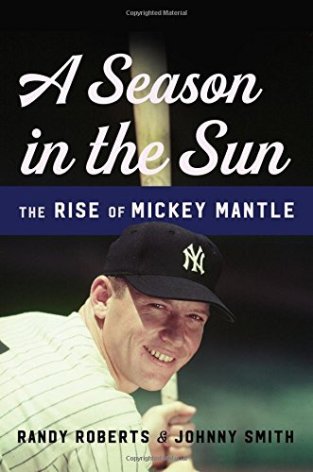 A review in 90-feet or less: There was that moment in grade school when we were trying to memorize terms used for the layers of the Earth below us, and when it became apparent that baseball could help us become smarter.
At the center of the Earth was the core. Like an apple core.
At the edge of the Earth was the crust. Like bread crust.
In between all that was the mantle.
You know, like Mickey Mantle.
The Yankees’ most revered player of his generation retired in 1969 — his June 8 “Day To Remember” ceremony was on a Sunday of that year, on my 8th birthday.
Mantle didn’t call himself the luckiest man on the face of the Earth, but you knew he moved the Earth during his playing days. And we even knew as much on the West Coast.
It encouraged us to check out bios of him in the school library. 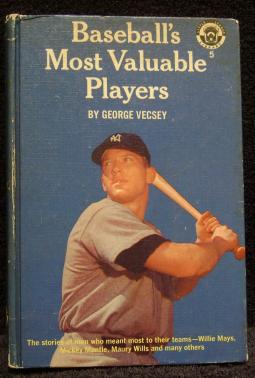 We can’t be certain, but perhaps it was “Mickey Mantle, The Indispensable Yankee,” by Dick Schaap in 1961.
Or “Mister Yankee” in 1963 by Al Silverman.
Or 1966’s “Baseball’s Most Valuable Players” by George Vecsey. They all look familiar.

During his career, he was credited with writing books. Yeah, sure. In 1964, Mantle did “The Quality of Courage,” with Robert Cremer, re-released in 1999, four years after his death.
In 1967 was another Mantle release called “The Education of a Baseball Player.“ We met him in ’85 while he was touring “The Mick,” with Herb Gluck. There was one more in ’94 called “All My Octobers: My Memories of Twelve World Series When the Yankees Ruled Baseball,” with Mickey Herskowitz.

In 1996, the Mantle family put out: “A Hero All His Life: Merlyn, Mickey Jr., David, and Dan Mantle : A Memoir by the Mantle Family” after he was gone. Later came, in 2002,  “Mickey Mantle: America’s Prodigal Son,” by Tony Castro. In 2007 came “7: The Mickey Mantle Novel,” by Peter Golenboch. Most recently there was Jane Leavy’s 2010 “The Last Boy: Mickey Mantle and The End of America’s Childhood,” and in 2012, the Buzz Bizinger try with “The Classic Mantle.”
And somewhere in all of that — 1991 — a Mantle-written book called “My Favorite Summer, 1956,” with Phil Pepe was there. And now it apparently needs updating.

The flashbacks to elementary school return because this book tries so hard to get us to a warm-and-fuzzy time in our lives and related it what Mantle must have felt in that ’56 season.
Give ’em credit for trying to change a narrative about Mantle’s career, since, as the authors put it, “Mantle’s biographers have emphasized his overriding weakness. Too often they have presented his life as seen darkly through a rear-view mirror, interpreting many events during his baseball career as a way station along the road to alcoholism.”
Not the books we read. At least as a kid. 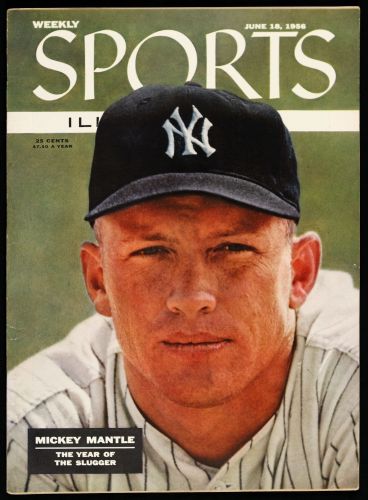 Since his death, Mantle’s life has been couched as more a cautionary tale, behold the tragic hero.
Roberts and Smith, whose previous project in 2016 involved the “fatal friendship” of Muhammad Ali and Malcolm X called “Blood Brothers,” took it upon themselves to spend as many pages as possible reliving Mantle’s 1956 “season in the sun,” with as little influence by all the New York sportswriters who helped create the image of him only to be part of the tear-down years later.
Roberts and Smith have a stated intention — “Our story begins with three questions: How did Mickey Mantle come to be seen as a hero? Why did it happen in 1956? And what did he meant to America?”
He was 25 at the time, almost six years into his career, plucked out of Oklahoma right off Route 66.
As for the Mantle buildup, we’re cruising along and finally realize there’s something missing — the story of a then-19-year-old on a spring day in 1951 during an exhibition at USC that gave him “Wonder Boy” status. For those who aren’t familiar with it, here’s a recap. And another. In Ron Fairly’s new book, he also devotes a couple of pages to it — something that happened six years before Fairly played at USC, but was important enough to recall what he knew about it.
Here’s another brief YouTube.com clip that glosses over it.

Whether or not the story needs to be debunked, it surely needs to be addressed, but the authors don’t.
Why ’56 seems to be the year to focus on is because ’55 was pretty good as well, but something was missing. The Yankees lost to the Brooklyn Dodgers in the World Series, bu Mantle led the AL with a .306 average, 37 homers and in on-base percentage, and he was fifth in the MVP voting behind teammate Yogi Berra. Yankees assistant GM Bill DeWitt advised Mantle to be more media-friendly and “rehabilitate his image” by not brushing off newspapermen. He listened.

In ’56, the Yankees won the title (Mantle hit just .250 but crushed three homers and made key plays in the outfield to preserve Don Larsen’s perfect game). The media loved him and made him the game’s mantelpiece.
Then came reality that burst that bubble. Mantle asked for a raise. Yankees GM George Weiss not only rejected it, but blackmailed Mantle with damaging reports from a private investigator about his late-night affairs. Those reports eventually were leaked to a magazine called Confidential, and all the innocence of Mantle was starting to chip away.
The next year came the outlandish scandal involving Yankees player (Mantle included) at the Copacabana. Then Mantle’s best friend, Billy Martin, was traded. 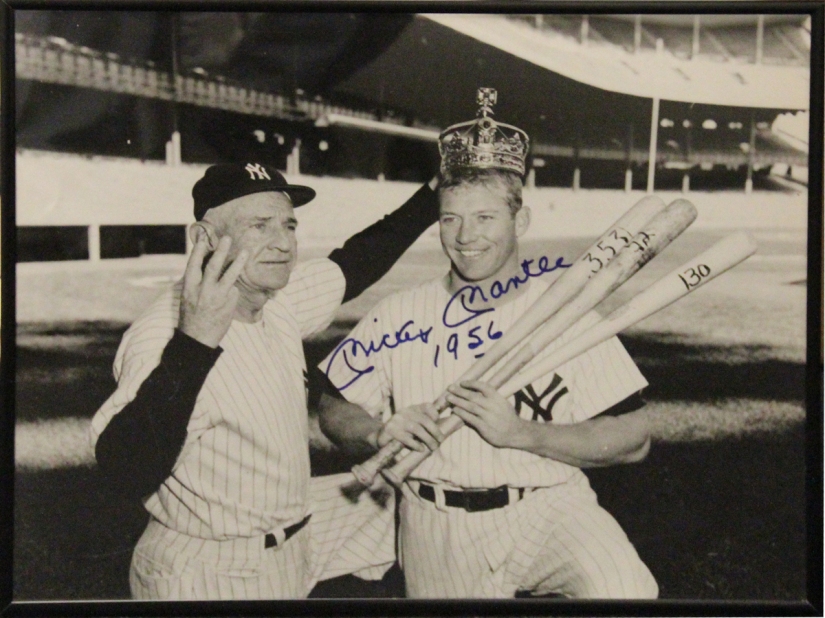 The authors decide that “Mantle became the most prominent victim of the new ambition to reveal the truth. In the process, who he was and what he meant to America in 1956 became lost … Mantle would never forget the joy of 1956 .. As he clobbered majestic home runs, spectators honored him with standing ovations, chanting his alliterative name. Mickey Mantle. The name evoked power and poetry, arousing the kind of admiration reserved for baseball immortals.”
Funny, but that last few sentences read like that just came out of one of those kids’ book about Mantle’s life we once read. Perhaps that’s intentional.

How it goes down in the scorebook: Remember how Mantle threw out Jackie Robinson at second base trying to stretch a single into a double in the 1952 World Series? It never happened, but many believe it to be based on that Mantle legend. As the scorebook shows, Robinson stayed at first base after that single after trying to deke Mantle into a throw from center field. Robinson went to third on a Roy Campanella single and scored on an Andy Pafko hit, and the Dodgers won that game. But Mantle came to believe the story of him throwing out Robinson.  “I’ll never forget it,” he is quoted. But further research shows that in no Dodgers-Yankees World Series did Mantle ever throw Robinson out at second base. It just shows how powerful the Mantle mystique was back then.

More background: The Basic Books publishing house piqued our curiosity, because it’s not one we’ve seen before. Was the book self published? According to the website, it is an imprint of Perseus Books, a Hachette Book Group company, and a division that “has shaped public debate by publishing award-winning books in history, science, sociology, psychology, politics, and current affairs.” Again, consider which publishing house puts out a book like this one, and you can also get a better sense of what they’re trying to accomplish. 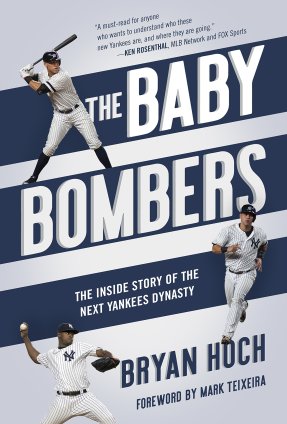 Also:
*Another new book that tries to bring Yankees lore into current event: “The Baby Bombers: The Inside Story of the Next Yankees Dynasty,” by Bryan Hoch (released March 6). Endorsements by Ken Rosenthal, Mike Lupica, Tom Verducci and Syzyn Waldman not withstanding, it reads like another basic New York baseball book that Yankees fans must have.