The book: “If God Invented Baseball”
The author: E. Ethelbert Miller
How to find it: City Point Press, 72 pages, $14.99, released Feb. 13
The links: At Amazon.com, at the publisher’s website. 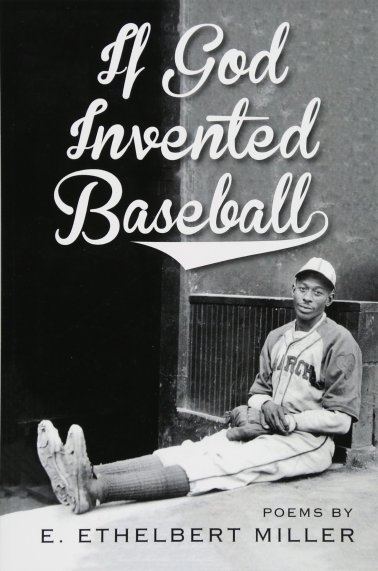 A review in 90-feet or less: “Ethelbert Miller is one of the most significant and influential poets of our time,” according to Gwendolyn Brooks.
Let’s start there.
Before we found that, we had never heard of Miller, let along Brooks.
As for Miller: The 67-year-old African-American from the Bronx, yet a Washington Nationals fan as he works on the D.C. literary community. He drew attention when when he was laid off after 40 years of teaching at at Howard University, the sane place that gave him BA in African American Studies. He has a bio on the Academy of American Poets website. And he has an acclaimed memoir in 2009 called “The 5th Inning” that is described as “one man’s examination of personal relationships, depression, love and loss. This is a story of the individual alone on the pitching mound or in the batters box. It’s a box score filled with remembrance. It’s a combination of baseball and the blues.”
(As for Brooks, who died in 2000, she won a Pulitzer Prize for Poetry in 1950 for her book, “Annie Allen,” and in 1989 received the Robert Frost Medal for lifetime achievement by the Poetry Society of America.)
We don’t feel worthy to credibly critique this medium of pentamic word scaffolding — if that’s even a word, or we’re just calling ourselves out on taking iambic pentameter and just creating our own mini poem genre.
We surely tried it at some levels of high school and college-level classes, but when you’re doing paint-by-numbers haiku or having fun with rhymes, the works of Miller, Brooks … Frost … take this to a whole new road not taken.
But we are constantly open to the influence something profound, something that strikes the heart and soul unexpectedly, something that reaches the core of a wound-up baseball. We seek constant new entry point in a media-filled world of more than just peanut-vendor noise.
And if you dare put Satchel Paige on the cover, we’re already intrigued.
Start with the poem from Page 2 that reflects the book title:

If God invented baseball
he would not rest on the seventh day.
Instead he would turn to us and say
“let’s play two.” He would let us bat
first while his angels danced
in the outfield.

We know it doesn’t all have to rhyme, like “Casey at the Bat,” or repeat a line like “Tinker to Evers to Chance.” The later is a whole other literary project we’ve tackled on Day 19.
But as long as we’re on this riff, what about no pepper games, too? No crazy defensive shifts? No instant replay? No unwritten rules that prevent left-handers from playing catcher or shortstop, or hitting the cut-off man, or …. managers who wear uniforms.
God would surely be against WAR, right?

The Jackie Robinson poem at the top seems more stark and relative to where Miller is going this. Maybe it’s best to read this during a rain delay?
We’ll keep trying to process this. We want this to work for us.
But until then … This is how we’ll end this year’s series.

How it goes down in the scorebook: A noted blurb by prolific baseball writer and friend Paul Dickson, who, among other things, wrote the Dickson Baseball Dictionary and The Hidden Language of Baseball:  “Ethelbert Miller celebrates baseball as a metaphor for his – and by extension the reader’s – life. This is not a collection of baseball poetry as such, but a collection in which baseball becomes the prism for great, accessible poetry, written by a master who can see a newborn second child as a ‘rookie struggling to learn the lessons of spring,’ and the bunt as an act of non-violence. This collection is at once sweet, sad and vital – in other words, a grand slam home run.”

Also: From a Q&A Miller did with BusboysAndPoets.com:
Q: Why was now the time to publish a collection about baseball?
A: Baseball has been called “America’s pastime.” I find it to be a game that is very human in how it is played. Where else can we find a mistake called “an error”? The title of my book is If God Invented Baseball. Baseball was invented by man and so we are reminded by how much beauty the game creates – the awesome catch or a player stealing home. Baseball teaches us how difficult perfection is. How often do we get to see a perfect game? Why does it take so long for a team and city to win a World Series?
I wrote this book of baseball poems because I’ll soon be 70 years old. It’s what I call my seventh inning. In baseball this is when fans rise in the ballpark and stretch. This is when we sing and cheer – it doesn’t matter what the score is. I wrote my new book looking back and looking ahead. The poems at the beginning of the book are about childhood and the learning of the game. The poems at the end of the book deal with aging and the celebration of life.
Q: What do you hope readers will take away from If God Invented Baseball?
A: I want this book to be read first by baseball fans. I want some readers to discover the game because of a poem. I would like to have major league players passing this book around in bullpens and dugouts. I want the families of players I mention in this book to know I tried to honor their loved ones.

*One more for the road to embrace in a poetic way: “Everything I Know I Learned from Baseball: 99 Life Lessons from the Ball Field,” by Philip Theibert, reissued last December, 2017. Thiebert, a former bat boy at Chapman College when his father was the coach, played baseball at Pomona College. He has done two collections of baseball poems, “Collisions at Home” in 2014 and “Bunts” in 2017.