The book: “Being Ted Williams: Growing Up with a Baseball Idol”
The author: Dick Enberg, with Tom Clavin
How to find it: Sports Publishing, 176 pages, $24.95, due out May 15.
The links: At Amazon.com, at the publisher’s website.

A review in 90 feet or less: It goes back to the Vin Scully line, about making God smile by telling him your plans.
More than a year ago, Hall of Fame broadcaster Dick Enberg, about to retire from broadcasting San Diego Padres’ games, wanted to time it so he could come out with a book about his boyhood hero, Ted Williams, just before the 100th anniversary of The Splendid Splinter’s birth, in August, 2018.
To have it also come out in June, it was also perfectly timed for a Father’s Day gift.
But time didn’t wait for Enberg to see it come through. He passed way last December, 2017 at age 82.
We planned as well to use this as the first book in the 2018 book review series. The release date was pushed back a bit. We have yet to see a review copy. When we do we will update this post. But we couldn’t let this series go without giving it a seat at the table, based only on Enberg was so joyous about this project as he told us about it, and we knew he would enthusiastically do all sorts of author appearances and interviews to support its eventual release.
For now, we’ll go by Enberg told us, and what he also wrote in a previous biography, about how as a kid growing up in Mount Clemens, Mich. (before moving to the San Fernando Valley), he would hit rocks over a telephone wire with a stick as he impersonated Williams’ swing.

In 1969, Enberg’s first year calling Angels’ games in Anaheim, Williams was in town as the manager of the Washington Senators.  Enberg had conveyed this story before:

“How do I get his attention? It’s my turn to do the pre-game radio show, and I am determined Ted Williams will be my guest. That afternoon I perused the Baseball Encyclopedia and discovered there was one game in 1941 when Williams pitched 1 and 2/3 innings against the Detroit Tigers. ‘That’s it!’ I said excitedly. That will get his attention. Two hours before the game I skipped down to the Washington Senators’ first-base dugout steps full of determined energy. No members of the press dared to venture into this electrical field. They were all swarming around like vultures but no one had mustered the courage to actually dart in and ask the first question to the great Ted Williams. He was silently glaring out at his team taking batting practice seemingly oblivious to his eager, but nervous, company. I jumped right in, blurting, ‘Mr. Williams, I’m Dick Enberg, the new Angels’ announcer, it’s my first year … I don’t have to tell you how much I admire you. In fact, you were my idol growing up. ..”
Not even a twitch from him. He continued his straight-ahead stare. Eyes of steel.
“I continued to jabber, ‘I have to do the pregame show … it’s a 10-minute show … and I’d be delighted if you’d be my guest. It would not only be an honor but it would be important to our audience.’ Still no response, not even a turn of the head. ‘And I don’t even want to talk about hitting.’ His shoulders twitched. Encouraged by any response, I continued, ‘Mr. Williams, I only want to talk about the time you pitched against the Tigers in 1941.’
“Williams whirled, looked me in the eye, reached out his left arm, wrapped it around my neck and barked, ‘Come here, meat, and turn on that tape recorder.’ I asked him a total of two questions the entire 10 minute interview. He elaborated on every pitch. “

Fortunately, Enberg got plenty of time with his hero until Williams’ death in 2002, and was able to not just interview him but pick his brain about all sorts of perspectives.
In 1989, he named his son Ted, who also got into broadcasting.
What does it mean to be a hero? Enberg also dives into how it may fit into other sports figures. But the fact it’s his final published writing, and Clavin was able to help sand down the edges to continue it’s publication, gives is a special place on our shelves.

How it goes down in the scorebook: Oh, my, of course.

Did you know: Upon Williams’ passing, Enberg tried to urge his son, John Henry, to have his father cremated and his ashes cast in the Florida Keys. Instead …

And for what it’s worth: We can never get enough of watching this again: 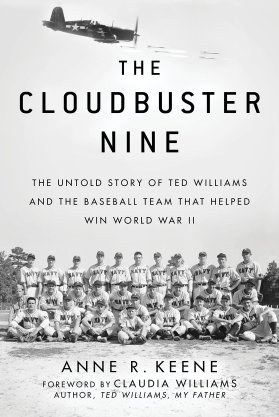 And another thing:
* The podcast home of Enberg before his passing provides a treasure of former shows.

Also new in the Williams-related library:
* “The Cloudbuster Nine: The Untold Story of Ted Williams and the Baseball Team That Helped Win World War II,” by Anne R. Keene (Sports Publishing, 380 pages, $26.99, due out May 1). At the elite Navy training school on the University of North Carolina campus in Chapel Hill, the Cloudbuster Nine baseball team practiced, worked on their baseball skills and played some games. That would be Williams, Johnny Pesky and Johnny Sain. It’s a fascinating read, not just for the subject matter, but how it was discovered by Keene.