Assuming you spent the last three days unplugged from the world of sports on a houseboat, on a lake, with no wifi — and don’t you wish we all could have that luxury — here’s a cheat sheet we’re prepared for your safe return:

"Season 4 of Cavs vs. Warriors was recorded in front of a live studio audience." pic.twitter.com/xQJOdJAHSl

Of course, it’s a Golden State-Cleveland NBA Final that begins Thursday.
Of course, the LeBron James-GOAT arguments will remain in full gaggle after he “willed the ramshackle Cavs” to a Game 7 Eastern Conference final win at Boston with a rather modest 35-point, 15-rebound, nine-assist performance last Sunday night. We can appreciate this will be his eighth NBA Final appearance in a row.
And of course, the Houston Rockets were going to miss 27 3-point shot tries in a row and squander a double-digit halftime lead at home in their Western Conference Game 7 final, allowing the Warriors to do what they always seem to do — outscore the Rockets by 18 points in the third quarter to flip the equation. 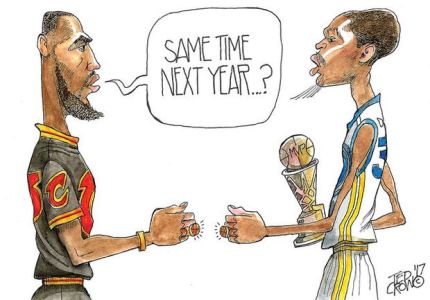 The Warriors are now plus-130 in third quarters during the playoffs, the highest overall scoring margin in a quarter by any team in a postseason during the shot clock era, according to ESPN Stats & Information research. LeBron James vs. Steph Curry — just like it was as the NBA All-Star Game in L.A. a few months back. The Game 1 line opens with the Warriors as a 12-point favorite on their home court, tying the largest spread in an NBA Finals game over the last 25 years (going back to the Lakers at home against Philadelphia in Game 1 of the 2001 Finals, which the Sixers won in OT).

As the holidway weekend temps rose into the 100s outside, Las Vegas kept it cool inside the T-Mobile Arena and captured the first game of the NHL Final against Washington admist a flury if ice repairs that had the pucks bouncing all over the place in a 5-4 result. Yet we’ve been instructed that we’re not supposed to allow the locals to capitalize on the situation. We just can’t help it. Two goals by the Golden Knights’ fourth line in the third period provided the difference, with Game 2 rolling in Wednesday — most likely another Michael Buffer “rumble” announcement — before it goes to Washington for Game 3 (Saturday). Maybe the Vegas fans — if not the players — were inspired by a full-page ad taken out in the Las Vegas Review-Journal that instructed them to “Just Win Baby.”

Only my opinion, but a win like tonight versus the @Phillies will go a long way to define this @Dodgers team. When a team rallies against a very good young team like Philly it will stay with them both for awhile. #comebackwinbaby #statementgame #Dodgers # takinittothehouse pic.twitter.com/3QQ7sCpyOX

If the latest CBSSports.com MLB power rankings mean anything – it’s as sweet or sour a measuring tool as anything else – the Dodgers have made the greatest climb to greatness (up six spots to No. 13) whilst the Diamondbacks have endured the greatest fallout (down six spots (down to No. 18, with A.J. Pollock on the DL). And that was before the Dodgers came back from a 4-0 deficit without a hit through five innings to post a memorable 5-4 win against the visiting Phillies on Memorial Day. The Dodgers’ resurgence seems to be not just having Chris Taylor’s launch angle re-calibrated, or Justin Turner in the lineup and hitting his first HR of the season, but also a subtle switch of putting Cody Bellinger in center field to keep Max Muncy in the lineup. Oh, and Matt Kemp hitting .338, fourth-best in all of baseball.

They'd also be career bests for any hitter in the Baseball Hall of Fame's Class of 2018 (Vladimir Guerrero, Chipper Jones, Jim Thome and Alan Trammell). pic.twitter.com/ariyAcTg1o

“Mike Trout Reduces the Yankees to Cannon Fodder,” read the Deadspin.com headline, and for once, the site was pretty accurate. The Angels’ New Jersey native  center fielder had his first career five-hit game, coming at Yankee Stadium on Saturday – three doubles, a homer and a leg-it-out infield single in the Angels’ 11-4 nationally televised win. He went 6-for-11 in the weekend series to get his average back up above .300. And it’s not like his homer was a fluke, either (maybe read up on the expansion of HRs from this NPR piece). And there’s also this: Mike Scioscia has tied Tommy Lasorda for most wins by a MLB manager at 1,599, 20th all-time. Scioscia also has about 70 fewer losses – which is about one full season of losses by a decent team.

As much will power as it took for Will Power to power through near-record-setting 91-degree temps and become the first Australian to take the Indianapolis 500 on Sunday morning, you can’t blame him for not crying over spilled milk. When handed the traditional bottle in the winner’s circle, he wasn’t sure what to do with it. “I just hesitated a bit because I’m not supposed to eat dairy,” he said. “But I didn’t care. I just drank it.” Barely. 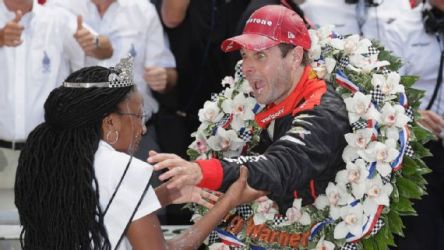 He took a sip, poured some over his head, then sprayed it around like a drunken frat boy, dousing his wife, Liz, as well as the nearby Indianapolis 500 queen. As long as he didn’t hear any Kelly Clarkson song afterward, he was fine apparently (as per this questionnaire he filled out for The Players’ Tribune). Meanwhile, Danica Patrick, who, in her final race, had the back end of her GoDaddy car go loose on Turn 2 of lap 68. She banged into the outer wall, skidded across the track, hit an interior wall and then stopped on the infield grass. Eventually the 36-year-old met up with boyfriend Aaron Rodgers and said she was “really disappointing for what we were hoping for and what you want from your last race, but I’m grateful for all of it. I just wish I could have finished stronger.”