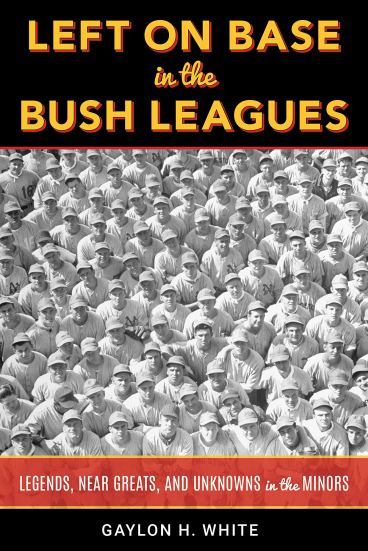 “Left on Base in the Bush Leagues: Legends, Near Greats and Unknowns in the Minors”

Wes Parker remembers.
The former Dodgers first baseman grew up in Brentwood and had his pops take him over to Gilmore Field near Beverly and Fairfax to watch the Hollywood Stars play. Here’s a kid, experiencing the Pacific Coast League’s golden era of the 1940s and ’50s, rooting for Carlos Bernier, Frankie Kelleher and Chuck Stevens.

Then one must wonder: We know Farmer’s Market and The Grove, and the CBS television studios exist there today. But what ever happened to the players?
“Players were not analyzed, dissected and interviewed to nearly the extent they are today,” Parker writes in this foreword, sentiments that could include how he was covered in his playing days at Dodger Stadium during the ‘60s and ‘70s, after going to USC.
“They played, then disappeared, returning to a mysterious life from which they came. They were like gods – majestic, young, supremely skilled, beautiful in those white uniforms with red-and-blue highlights, the exact same color and shade Superman wore.” 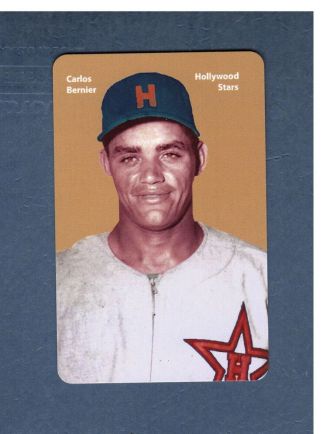 Bernier, in particular, was someone who Parker really wanted more closure, still disappointed the Stars franchise was forced to move to Salt Lake City in 1958 when the Dodgers arrived to claim the L.A. territory.
White has the answer.
It consumes Chapter 12, “Made for Hollywood.”
It’s quickly pointed out that while the 5-foot-8, 180-pound Bernier was known as “The Cuban Comet” for his speed, he was definitely a Puerto Rican much like his countryman, Roberto Clemente. Bernier was also a perfect draw for the Hollywood crowd because of his flare and hot temper.
The later led to a 34-game suspension – the end of the 1954 PCL season – when he hit umpire Chris Valenti in the face during an argument.
“BERNIER STRIKES UMP BEFORE THOUSANDS” screamed the L.A. Mirror.
“It probably cost Carlos another shot at the majors,” writes White. 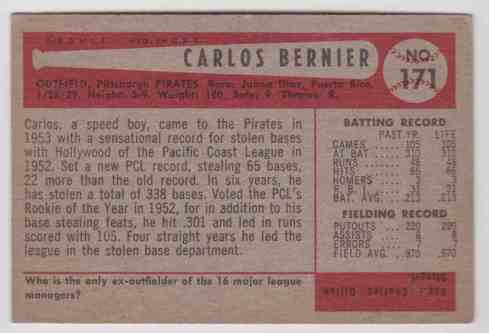 “In a way, Bernier was ahead of his time,” Art Spander, the longtime Bay Area columnist who grew up in L.A., rooting for the Stars’ rival Los Angeles Angels, says in the chapter.
White not only documents Bernier’s PCL and brief MLB career, which came under the watch of Pirates GM Branch Rickey, but there’s a deeper dive into biographical material about Bernier’s upbringing and the context of his playing time. White has a way of turning colorful phrases when appropriate to the narrative but the pleasure is the fact finding mission likely lost on even the most die-hard historians, some of it culled from local and now defunct newspaper archives.

For example, White documents a story Benier had with his 32-year-old son, Nester, at Christmas 1988. Nester was earning a doctorate in pharmacology and toxicology and focusing on a career as a research scientist and educator.
“You know, Dad, I envy you in a good sense.”
“Why is that?”
“You’ve had the opportunity to play baseball in the major leagues and to play with some of the greatest players, even in the minor leagues. I wish I could’ve done that.”
“No, actually, I should envy you. Because you were able to go to school and I wasn’t. I don’t know what I would have done if I didn’t play baseball.”
Several months later, Carlos Bernier hung himself with a rope in the shower of his Juana Dias home. It was a major news event in Puerto Rico, but no where else. His family had no idea this would be how his life could end.
Bernier was inducted into the PCL Hall of Fame by the PCL Historical Society in Carson, in 2004. And even more: Curt Roberts is credited as the first black player in the Pirates’ history, in 1954. Bernier, whom Jet magazine once referred to as a “Negro Coast Star” in the Valenti slapping story of 1954, played for the Pirates in April, 1953, and “should be recognized by the Pirates and MLB as the first to break the color barrier in Pittsburgh,” White writes. “Even in death, Carlos Bernier is causing controversy. That’s only fitting.”

White, who saw many of these PCL players as a kid, was able to interview many of them and their families for this project he starts in 1974 and was still going at it in 2018. It includes interviewing Stevens, who had the claim as the oldest living major leaguer when he died on May 28, 2018 at age 99.
As a SABR member and part of the Pacific Coast League Historical Society, White, living in Catersville, Georgia, also pieces together the puzzles of minor-league careers of Ping Bodie, Bob “Round Trip” Crues, Joe Bauman (who ran a Texaco station on Route 66 in Elk City, Okla., during the day), Bob Newsom, Joe Taylor (done in by alcoholism) and the legendary Steve Dalkowski.
Could each and every one of them fill their own book? Maybe not, but White fleshes out everything to make that seem possible. Even better, as a collection of chapters of baseball history, this works even more special in this package deal.

How it goes down in the scoreboard

White, a former sportswriter in the newspaper world of the ‘60s and ‘70s, once regaled us in the 2014 book, “The Bilko Athletic Club: The Story of the 1956 Los Angeles Angels.”
He also produced last year’s book, “Singles and Smiles: How Artie Wilson Broke Baseball’s Color Barrier” in the PCL.
If all these new stories are the residue of his research for those books, it was worth the wait. As is his choice of Parker to do the foreword, where the 79-year-old writes about how the PCL was an era “when the entire world seemed more alive and beautiful and civilized than it does today.”
White brings it all back, in full color.

Carlos was made for Hollywood. pic.twitter.com/1hSwSyIwOd

3 thoughts on “Day 27 of 30 baseball book reviews for April 2019: Shake up the bushes, and echos, for stories hardly minor”