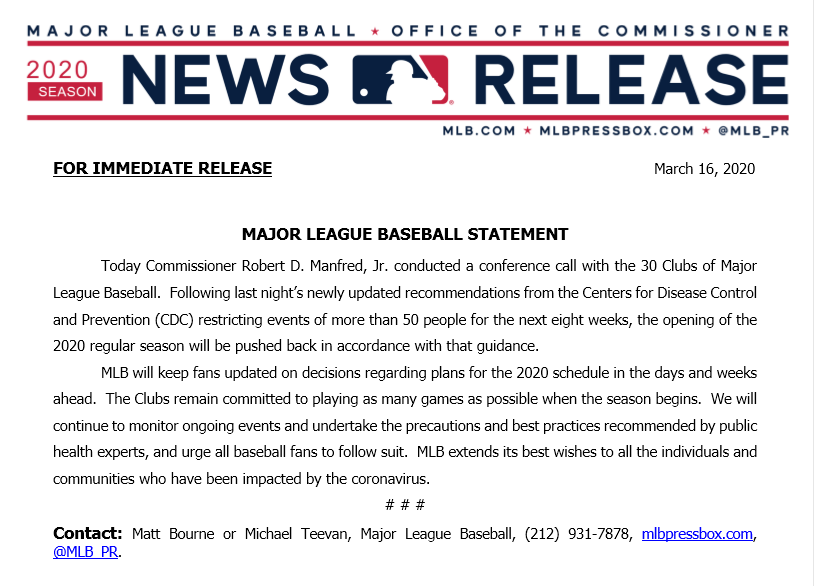 Even before that press release landed less than a half hour ago, the words of John Thorn woke us up again this morning.  Words that came recently via a tweet from Jared Diamond of the Wall Street Journal.

I keep coming back to this from my conversation with MLB historian John Thorn earlier today. He and I talked for 20 minutes, but he called back because he realized, like so many of us, that something about baseball not happening genuinely affected him. This quote explains why. pic.twitter.com/GfW6itADZh

For those in self-isolation and concerned about self preservation, we hope you might agree it’s OK to spring forward with a review of a few dozen baseball books we’ve been doing, as we sit out this serious delay.

For the last 10-plus years of reviewing 30 baseball baseball books during the 30 days of April, the only real guidelines we established for ourselves as guard rails for this sometime crazy/self-inflicted/worthwhile project was to have it coincide with the Major League Baseball season launch, and also the books should be recently released or, in some cases, within the last six months if they provide some historical context to what we’re seeing these days.

Then we saw another Thorn message from his own tweet:

Why not launch this rocket a few weeks early — especially to give some heads up about those books already available? We can space it out a bit, even as some say the start of the MLB season may not be until June, if we work this thing out right.

Diamond’s new book “Swing Kings: The Inside Story of Baseball’s Home Run Revolution,” is due for release March 31. That’s right around the time Brad Balukjian’s “The Wax Pack: On the Open Road in Search of Baseball’s Afterlife” arrives.

Eric Nusbaum’s must-read “Stealing Home: Los Angeles, the Dodgers, and the Lives Caught in Between,” should be coming a week from Tuesday, along with Jesse Doughtery’s “Buzz Saw” on the Washington National’s World Series run (and running right over the Dodgers).

Others like Billy Ripken’s “State of Play,” is already out, as are baseball novels by Emily Nemens (“The Cactus League”) and Gish Jen (“The Resisters”).

I’m not paid to do any of these reviews, per se. The life of a freelancer now involves many pitches and a lot more swings and misses that we’d care to admit. If we’re hitting .300 with our pitch count, that’s not bad. If it pays, even better.

We’ve had time to read. A lot. For many reasons.

There are too many reasons to launch this now instead of waiting. We’re game to start the clock early on this and go extra innings if needed. Give us a little time to warm up and we’ll get it going.

Also:
* The 2019 review series at this link, with the L.A. Times picking up a portion of the reviews at this link.
* A 2018 roundup.
* Sadly, our former employer eliminated archives of the reviews going back many years that we did at insidesocal.com/tomhoffarth. Hopefully, you can find some of them through Google searches, but …
* Our 2013 review of Ron Kaplan’s book “501 Baseball Books fans Must Read Before They Die” that continues to be a fine resource for the historical list of books one might want to go back and find.
* We did a 2009 review of “Six Decades of Baseball: A Personal Narrative” that we thankfully see was blessed with our thoughts.

1 thought on “A revised 2020 vision for the annual review of 30 baseball books: Spring forward, stay hopeful”