The book: “The Pitcher and the Dictator: Satchel Paige’s Unlikely Season in the Dominican Republic”
The author: Averell “Ace” Smith
How to find it: University of Nebraska Press, 240 pages, $26.95, released April 1.
The links: At Amazon.com, at the publisher’s website. 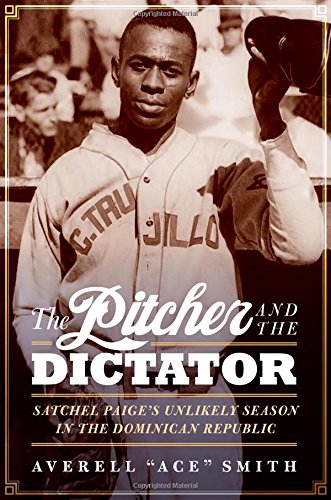 A review in 90-feet or less: To show you where this is going, consider that last week, Amazon.com had this book listed as the No. 1 new release in “Central America History.”

“This is not really a story about baseball,” writes Smith in the epilogue. “It’s a story about power. A dictator on a Caribbean island decided he needed to rent the best baseball players to win a series dedicated to his ‘reelection.’ Oddly this confluence of events brought to the small island the best championship series ever played.”

The story is beyond compelling, a world lesson on what happened in the Dominican when a tyrant named Rafael Trujillo took over, rigged the election of 1930 by having his people kill off his opponents, then decided a winning baseball team with his name splashed across the chest would convince the locals that, through victory on the field, he could get re-elected.
And somehow Satchel Paige, who accepted $30,000 to help make it happen, didn’t really know what he was getting into. He defected from the Negro Leagues to become part of this propaganda machine that eventually led to the recruitment of Josh Gibson and Cool Papa Bell. That was to offset the other local team full of stars that included Cuban pitching and hitting great Martin “El Maestro” Dihigo playing for the Aguilas Cibaenas.
There was a championship game that this all led up to.
With the Dragones de Cuidad Trujillo holding an 8-2 lead in the ninth inning, it started slipping away. Paige came in to save it — but not without dodging some bullets. Just figuratively. But he knew it could be literally.

A story that almost reads like a Richard Pryor script about a bunch of players who went to a banana republic with the promise of money and drinking abilities behind the “whites only” rope but then realized they probably were in way over their heads and realized there were guns pointed at them if they didn’t win and get the heck out of there.
Cuidad Trijillo, on the shore of the Caribbean in Santo Domingo, was daunting enough for the Americans who visited — right beyond the right-field fence was the rusting hulk of the USS Memphis, from the 1916 American invasion and now sitting there, stranded off shore, as a reminder.

How it goes into the scorebook: Worthy of finding more books about Paige. As White writes in the preface: “Paige wrote the entertaining short book ‘Pitchin’ Man’ when he broke in the Majors (in 1948, released again in 1992). After retirement he took time to write his autobiography, ‘Maybe I’ll Pitch Forever,’ which was published in 1962. Because it was written by a baseball player, it will never be viewed as a serious literary work, yet I believe it is the ‘Huckleberry Finn’ of the twentieth century.”

What we didn’t know from the book but found in a bio of him at U-S-history.com:
In 1930, Paige was offered $100 a game to join Cuban legend and future Major League Hall of Famer Martin Dihigo, on the Santa Clara team. Owing to the popularity of gambling on the games by the public, no drinking or late-night carousing was allowed. That policy, plus the “strange” food, didn’t exactly excite Paige. Following 11 games, he packed his bags and headed for the mainland, where he hooked up with Jackson and renewed Paige’s “have arm, will travel” philosophy.